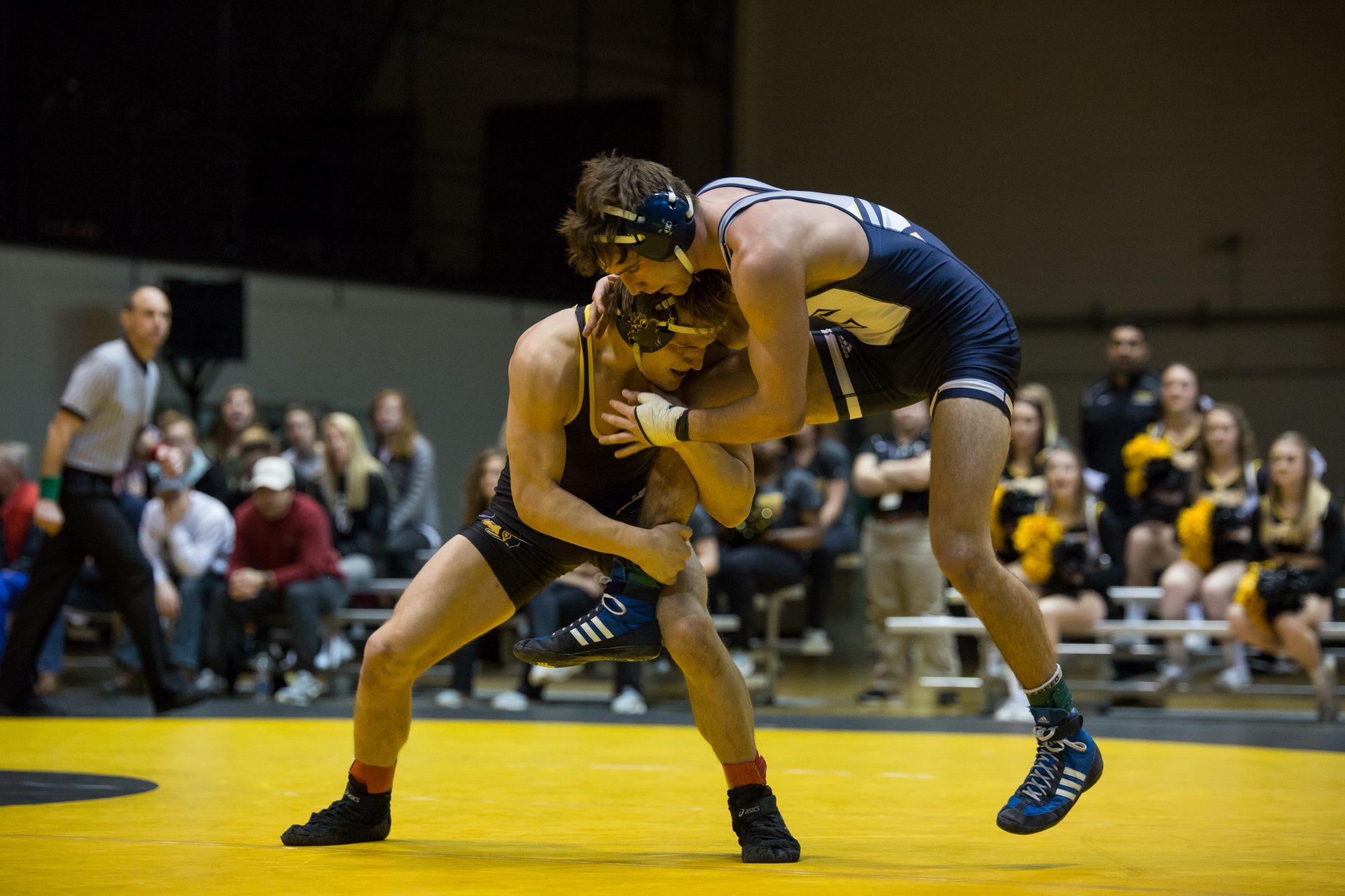 The Mountaineer’s Matt Zivistoski attempts to take down Chattanooga’s Roman Boylen. Following a 16-16 tie, the Mountaineers stayed undefeated in the SoCon with a 55-54 tiebreaker over the Mocs.

On Sunday at 3 p.m., the App State wrestling team will host a Big Ten opponent for the first time in program history as they take on Indiana University in the NWCA Division I dual championship series in Varsity Gym.

Despite the shaky record of the Hoosiers this season, App State head coach JohnMark Bentley is not sleeping on the talent of any opponent and isn’t thinking about last year’s match at all.

“They are a better team than they were last year,” Bentley said. “They probably would be ranked had they had all of their starters in the lineup all season. They spent the whole first semester with their three best kids not even wrestling.”

Team captain and senior heavyweight Denzel Dejournette isn’t really drawing upon last year’s match either. He is more focused on drawing off of the successful season the Mountaineers have had during this year.

“We have to come in here and do what we do,” Dejournette said. “Just because we beat them last year doesn’t mean that it will be the same case this year. We have to make sure that we go out there and give it everything we got and put the nail in the coffin we can.”

The Mountaineers were undefeated this season against Power 5 opponents at home, taking down then no. 25 North Carolina opponent from the ACC and a then ranked no. 15 Oregon State from the Big 12. In spite of those victories, and a six match win streak, Bentley acknowledges the dominance of Big 10 wrestling.

“We have to be ready to battle,” Bentley said. “Any time we wrestle a Big 10 team you know it is going to be tough. It’s the college power conference of the United States.”

The Mountaineers tested the resilience of this year’s squad multiple times. They wrestled four ranked opponents in nonconference and then found themselves in tight matches during conference play against Campbell, Gardner-Webb and UT-Chattanooga where they won by one point in a scorecard playoff.

“We had a grueling first semester and then it didn’t get any easier when we got to conference play,” Bentley said. “Each and every match it took a total team effort for us to win the regular season. When the team needed somebody to step up it seemed like it didn’t matter who it was, someone always did so that is something I am proud of.”

Battle tested and ready for the task, Dejournette and the Neer’s are looking to put the nail in the coffin and close out the end to a historic season.

“It’s my last home match so it is very exciting to finish it with a Big 10 school,” Dejournette said. “Hopefully we will be able to get a big crowd out here and do what we do and keep this winning tradition up.”

The Mountaineers went a perfect 8-0 this year at home and look to continue that dominance into Sunday. The first 150 students at Sunday’s event match will get in free. Following that, each student will have to pay regular price.