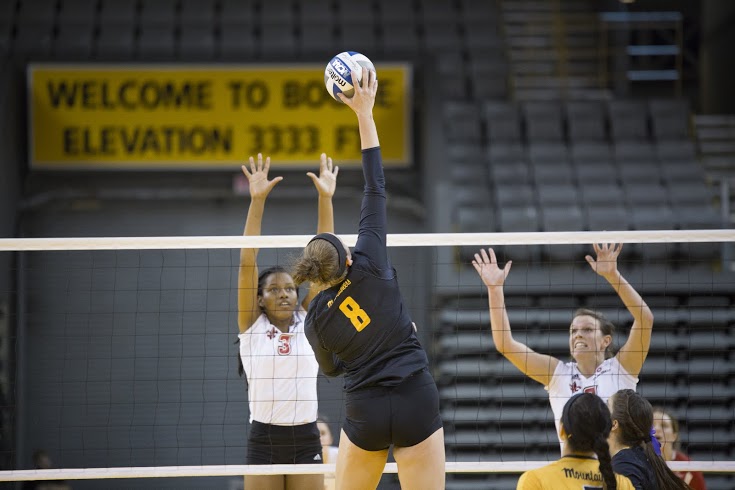 The match featured outstanding team play. The first set started slowly, but eventually picked up after a crucial timeout called by App State. Seniors Emily Corrigan and Jess Keller and junior Ashton Gregory each had 12 kills. The Mountaineers tallied 79 digs during the game, with 18 from senior Meghan Mahoney, 17 from senior Paige Brown, 16 from Emily Corrigan and 14 from junior Kati Stammen.

Despite the commanding 3-0 victory, head coach Matt Ginipro wasn’t impressed by the team’s effort early on in the match.

“We weren’t playing well. We weren’t going after it,” Ginipro said. “We had the opportunity to really go after a team where statistically we were above. We were allowing them to score points and making way too many errors, but we came out of that and picked it up later.”

The Mountaineers won’t take too long to enjoy this victory, with upcoming matches to South Alabama, Georgia Southern, and Arkansas State. The undefeated Arkansas State Red Wolves will be coming to Boone on Nov. 8 and it is a match that many have circled on their calendar, as the winner will likely be crowned the Sun Belt champion.

“I think people are clearly looking at the matchup of us and Arkansas State because potentially it could be two undefeated teams,” Ginipro said. “But we’ve got to deal with South Alabama first, who’s playing really well right now.”

Stammen had similar words to say about Arkansas State.

“First we’ve got to get through South Alabama and right now they’re ranking fourth in the conference and they’ve got a three win streak,” Stammen said. “So hopefully this Sunday we’ll go in and get a nice win out of them and then get ready for Arkansas State.”

The Mountaineers appear to be streaking for a conference title in their second year in the Sun Belt. Whether they can hold up against tough conference opponents in their last weeks of play remains a mystery.