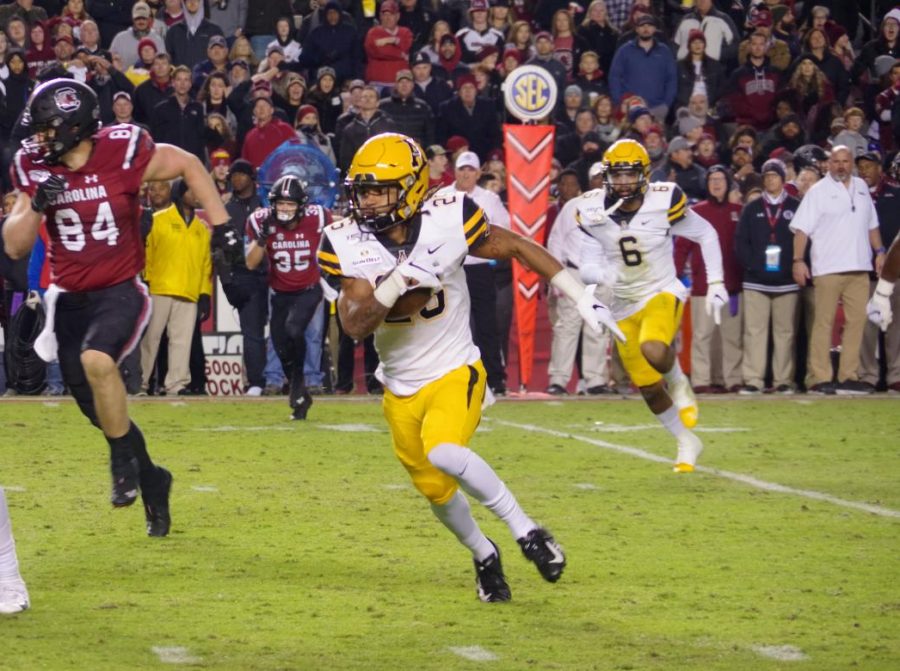 True freshman Nick Ross intercepts the first pass of his career and returns it 20 yards for a touchdown against USC.

Ten minutes before kickoff, South Carolina fans were at their loudest and most excited. Fireworks went off and the student section waved towels vigorously as the Gamecocks took the field, emerging out of the tunnel as smoke billowed out around them.

By the 7:10 mark in the third quarter, App State had opened up a 20-9 lead and had effectively sucked the energy out of the stadium that was so loud hours before. The Mountaineer defense was not letting South Carolina do anything. Although it was only an 11-point game with plenty of time for a comeback left on the scoreboard, Gamecock fans started to leave Williams-Brice Stadium.

For the second time this season, App State marched into a Power Five stadium and took it over. From the scoreboard, to the fans, to the cheers, the Mountaineers went on to win 20-15 in exciting fashion.

“This one was a little more personal for some of us, but it was the same way when we went and played in Chapel Hill,” Senior tight end Collin Reed said. “The guys that didn’t necessarily get looks (from UNC or USC), they always play with a chip on their shoulder.”

With the victory, App State gave its fans something else to be proud of, but the fans aren’t the only ones proud of how the team performed.

“I’m just proud of the focus and effort our guys played with,” head coach Eliah Drinkwitz said. “I’m proud of the way they battled all game. They never flinched.”

South Carolina received the opening kick and put together a 15-play drive that ended with a 41-yard field goal from junior kicker Parker White, giving the Gamecocks an early 3-0 lead with 8:51 left in the first quarter.

The Mountaineers answered with a field goal of their own on the following possession. Junior kicker Chandler Staton split the uprights on a 40-yard attempt, knotting the score at three apiece with 5:10 to go in the first quarter.

The battle between the kickers continued on the third drive of the game. South Carolina marched up the field before the App State defense held strong with its back against the wall, getting three straight stops in the red zone to force the field goal attempt. White nailed it from 25-yards to put the Gamecocks up 6-3 with 1:22 left in the first quarter.

Both defenses held strong until the 8:29 mark in the second quarter, when Staton connected on a 47-yard field goal to tie it back up at 6.

Again, it became a defensive battle, with neither offense seeming to find any sort of rhythm, until App State true freshman defensive back Nicholas Ross came up with one of the biggest plays of the game.

Ross read South Carolina quarterback Ryan Hilinksi’s eyes and jumped in front of a pass, making the first interception of his career and taking it 20 yards for a touchdown.

“That was an amazing feeling just knowing it’s a next-man-up mentality on the team,” Davis-Gaither said. “Whoever is in the game, we expect them to play at the highest level. Him coming up and making that play, that was awesome.”

Staton’s extra point put the Mountaineers in front 13-6 with 1:51 remaining in the first half. It was App State’s first lead of the game — a lead it would never relinquish.

App State received the kickoff to start the second half. Five plays into the opening drive of the half, junior quarterback Zac Thomas threw an interception. The turnover set up South Carolina deep in Mountaineer territory, but the defense once again stood tall. The Gamecocks only gained three yards on three plays before being forced to attempt a 50-yard field goal. White knocked through a new career long, bringing his team back within four.

With the momentum shifted to the home team, junior wide receiver Jalen Virgil snagged the kickoff and returned it 57 yards to the USC 39-yard line. Zac Thomas then connected with junior wide receiver Corey Sutton for a 23-yard gain before running in a one-yard score himself. The touchdown put the Mountaineers up 20-9 with 7:10 left in the third, and snatched the momentum right back from South Carolina.

The rest of the third quarter was back to the defensive showdown of the first half as both teams were forced to punt on their succeeding drives.

App State went into the fourth quarter with an 11-point lead, and a defense that was dominant throughout the game. The Mountaineer defense didn’t allow a touchdown until there was just 2:58 left in the game, when senior receiver Bryan Edwards caught a 23-yard touchdown pass from Hilinski, bringing the Gamecocks within five.

Instead of kicking an extra point, head coach Will Muschamp elected to attempt a 2-point conversion to get his team within a field goal of the Mountaineers. However, senior defensive back Desmond Franklin read the play and picked off Hilinski. The score remained 20-15.

South Carolina kicked off and the App State offense took the field with 2:58 left. The Mountaineers needed to deliver one last first down to finish off the Gamecocks, but could only gain eight yards in three plays. With 1:50 left, South Carolina had one final possession to win the ball game.

On the final play of the game, Hilinski dropped back and stood in the pocket for several seconds with zero pressure around him. He stepped up confidently and launched the ball towards the end zone with one second left.

Running downfield was a wide open Edwards. As he neared the back of the end zone, he reached out trying to pluck the ball out of the air to win the game, but it was just out of reach. The pass fell incomplete and the App State sideline stormed the field to celebrate.

Zac Thomas threw for 105 yards on 9-15 passing, one interception and one rushing touchdown.

“It makes you know all that hard work in the offseason is paying off, so I’m super excited for these guys,” Thomas said. “These seniors deserve it. They’ve been through some ups and downs in different seasons, and we got them two this year.”

Junior running back Darrynton Evans rushed for 85 yards on 23 attempts, and returned a kickoff for 41 yards. Jalen Virgil returned two kickoffs for a total of 76 yards.