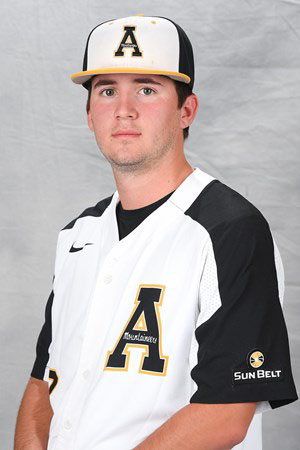 Sophomore pitcher Will Sprinkle will be the ace of the staff this year after going 2-1 with a 2.96 ERA in 5 starts last season.

After being swept in their opening series versus Tennessee, the Mountaineers bounced back, defeating Manhattan College 5-3 in their home opener.

Right-handed sophomore pitcher Will Sprinkle got the start and pitched lights out in his seven innings. Sprinkle had a no-hitter through six innings and ended the game with four strikeouts and an ERA of 2.77.

“I definitely got settled in probably by the third inning. I was a little rusty at first, but once I got settled in and got my tempo down, it felt good,” Sprinkle said.

The game was hitless for both teams until the Mountaineer bats got hot in the bottom of the fourth inning. Sophomore third baseman Bailey Welch hit a triple and recorded the first App State run of the season after a sacrifice fly from freshman Luke Drumheller brought him home.

“Bailey did a good job. I think sometimes when you come into a season and you start hitless through your first three games, it can kind of start building mentally,” head coach Kermit Smith said. “And then you get that one and then stuff starts falling in mentally so I thought it was a really good job.”

In the same inning, the Mountaineers recorded two more hits with an RBI double from sophomore left fielder Kendall McGowan and a single by senior shortstop Joel McDaniel, giving them a 2-0 lead.

App State extended its lead to 4-0 in the fifth inning with another triple, this one from senior catcher Riley Smith, who along with Welch, ended the game with two hits and an RBI.

Junior right-handed pitcher Andrew Papp entered the game in the eighth inning and senior closer Kaleb Bowman in the ninth to finish the game for the Mountaineers, who were up 5-3. Both recorded a strikeout each, allowing no runs and Bowman secured his first save of the season.

“If we keep with our offensive plan then our pitchers are going to shove like they did today and we’ll get another win,” Riley Smith said.

The Mountaineers concluded their series with Manhattan on Sunday with a doubleheader, going 1-1. They defeated the Jaspers in the first game 14-5 with McDaniel smacking two, two-run home runs. They dropped the second game 5-4 but freshman right field Phillip Cole had a good game, going 3-for-5 at the plate with three RBIs.