Mountaineers seek to keep title hopes alive against No. 14 Chanticleers 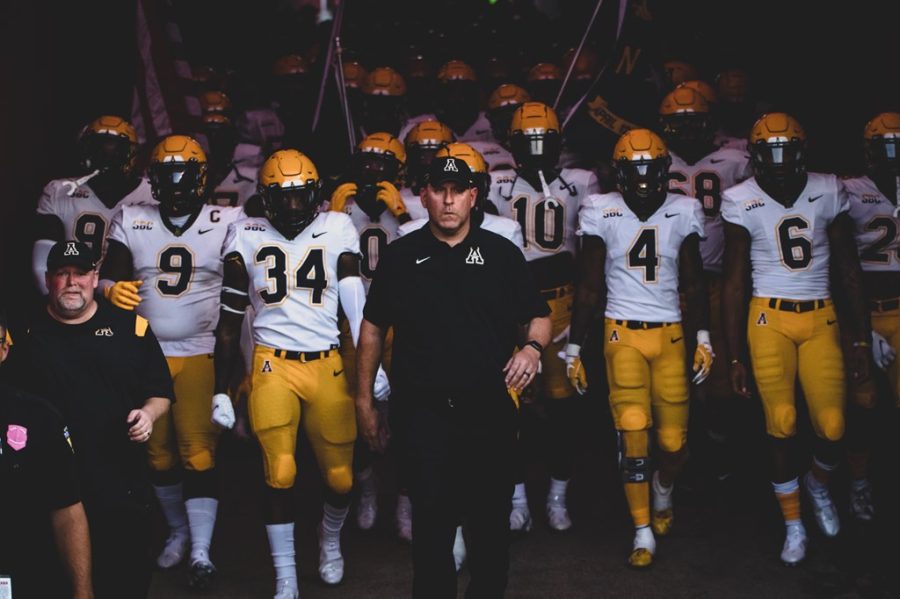 Head coach Shawn Clark leads the Mountaineers onto the field in their conference matchup with Louisiana. Clark is now 0-2 against the Ragin’ Cajuns, the only two losses to Louisiana in program history, and sits at 0-1 against Coastal Carolina, the program’s only loss to the Chanticleers.

App State takes on No. 14 Coastal Carolina Wednesday night in a matchup that will likely decide the fate of the Sun Belt East Division.

“All of our goals are in front of us,” head coach Shawn Clark said. “Whoever wins this game will be in the driver’s seat.”

The Mountaineers take on the Chanticleers after enduring their worst beating in conference play since 2014, losing 41-13 to Louisiana. The Ragin’ Cajuns outgained App State by 244 yards, running for 246 on the ground and adding 209 through the air. Four turnovers and zero third down conversions on 11 attempts added to the extensive list of blunders committed by the Mountaineers.

“You have to let this game go. You can’t sit there and keep talking about Louisiana,” Clark said. “That game is gone, and you can’t get it back. It starts with the head football coach.”

App State’s next opponent is headlined by a high-powered offense, posting 48.8 points per game and racking up 554.2 yards per game. Coastal Carolina quarterback Grayson McCall has completed 79.8% of his 109 pass attempts, good for 1,478 yards, 14 touchdowns and one interception.

McCall’s favorite target between the 20’s is Jaivon Heiligh, a receiver in his fourth year with the Chanticleers. Heiligh has a team-high 29 receptions and 573 receiving yards, resulting in four touchdowns. In the red zone, McCall tends to look for his 6-4, 250-pound tight end Isaiah Likely. Likely has caught eight touchdowns on 27 receptions. Nearly 30% of his catches result in six points.

“We’ve got a great opponent coming in here in Coastal Carolina, and Coach has done a great job with their program, but we’re focused on us,” Clark said. “We’re getting ready to play on Wednesday evening.”

Coastal Carolina seldom turns the ball over, giving possession away only three times through six games. However, the team also rarely forces turnovers, stealing two this season. The Mountaineers are polar opposites, committing 11 turnovers and forcing eight. At the rate the Chanticleers score, possessions will be extremely valuable. App State quarterback Chase Brice can’t afford to throw multiple interceptions against the Chanticleers, as he did in Louisiana. Whichever team can win the turnover battle Wednesday night will have a major advantage in the overall game.

The Mountaineers left Lafayette with numerous injuries. Junior Cam Peoples has missed the past two games with an ankle injury he suffered against Marshall. Senior defensive back Shaun Jolly and super senior receiver Jalen Virgil also got banged up in the loss, according to Clark.

With the injury to Peoples still lingering, senior running back Daetrich Harrington’s return from injury could be vital to the Black and Gold. Harrington only saw two rushes in his season debut against the Ragin’ Cajuns, taking the field for nine plays due to a snap count enforced by the coaching staff. Harrington will likely see more volume Wednesday night, especially with transfer back Jahmir Smith fumbling on one of his three rushing attempts against Louisiana.

“I’m happy with where he is right now. He had another good week of practice, and that gives us that added depth in that room we have to have to be successful,” Clark said. “He’ll get more reps this week.”

If the Mountaineers are to remain undefeated at home and knock off a ranked opponent for the first time since defeating No. 5 Michigan in 2007, they will need to put together long possessions on offense, limit Coastal Carolina’s big play ability, and win the turnover battle.