Mountaineers shut down No. 6 Aggies, secure largest win since Michigan 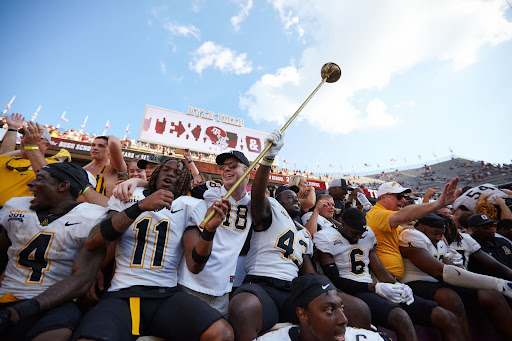 Mountaineers celebrate after the win with the section of App State fans that made the trip to Kyle Field Sept. 10, 2022.

One week removed from heartbreak in a 63-61 loss to open the season, App State stormed into College Station, Texas and took down No. 6 Texas A&M 17-14. The Aggies paid the Mountaineers $1.5 million to come down for the game, and App State came out with the victory to boot. This is the program’s second victory over an AP top ten team, the last being the historic win 15 years ago over No. 5 Michigan in the Big House.

“Coming off a tough loss from last week, we had to regroup on Sunday, last Sunday, and come back, and the key was believe, and that was our thing the whole way. You had to believe in yourself, believe in this program,” App State head coach Shawn Clark said.

During the week leading up to the game, Texas A&M head coach Jimbo Fisher spoke highly of App State, noting the veterans throughout the roster, including fourth, fifth and even sixth-year players leading both sides of the ball. The experienced Mountaineers were unfazed by the crowd of 92,664 and stuck to their gameplan to pull out the upset victory.

Offensive coordinator Kevin Barbay and the coaching staff flipped the script from the high-scoring affair against the Tar Heels and went old-school. App State controlled the clock and stuck to the run game early and often against a highly touted, but young Texas A&M defense. Fisher’s 2022 recruiting class was ranked first in the nation according to 247Sports, but experience reigned supreme Saturday. The Mountaineers held possession for a whopping 40:29 of game time, over two-thirds of the contest, including running 80 offensive plays to a meager 38 from the Aggies.

“We don’t recruit at the same level, we don’t have what they have, but we have a lot of heart,” Clark said. “We get the right kind of players on our program, and I think if you look at every one of our players in our program, they believe in what we do … all of our goals are in front of us.”

The game started with short drives from both teams, and App State was the first to march deep into opposing territory with their second drive of the game. Without junior running back Nate Noel due to an ankle injury, sophomore transfer Ahmani Marshall played a large role in the rotation for the first time in his Mountaineer career, and he delivered.

Marshall and redshirt junior Camerun Peoples are similar backs, both 6-foot-2 and 220 pounds or more, and their strength was on full display in Kyle Field. While the Mountaineers struggled to run outside the tackles, this pair was efficient all day rushing into the teeth of the defense, especially Peoples, who finished with 112 rushing yards.

“We were down Nate this week and so, Ahmani and Cam and Chop, they came in and just did a fabulous job. Protecting me and running hard, not tiptoeing, just taking those dirty yards,” redshirt senior quarterback Chase Brice said.

After the App State offense started the game with a short drive, all the pressure was on the defense after a tough outing against North Carolina Sept. 3. They settled in immediately, giving up just a single first down on the opening drive from the Aggies.

On the second offensive drive, the Mountaineers found their rhythm. With the run game finding its feet, Brice and his receivers were focused on attacking Texas A&M’s defense over the top, and sophomore Christian Horn was a couple inches from hauling in a touchdown grab but the team was forced to settle with a field goal attempt. Sophomore Michael Hughes missed the 42-yard attempt off the right upright, the first attempt of his career after going without an attempt in the UNC game.

“We had to get some turnovers on defense and our defense created those. Those guys played lights out. It was bend, not break, but again, a lot of credit goes to our defensive staff for putting a great game plan together for this week,” Clark said.

With the ball back on the Texas A&M 29-yard line, the Mountaineers seized the opportunity gifted by the defense. An unsportsmanlike conduct penalty on Clark looked to slow the drive, but a timely pair of facemask penalties on the Aggies set up shop for App State on the four, and Marshall crashed into the end zone to take a 7-0 lead on the first play of the second quarter.

After Texas A&M marched down the field in a blink, 75 yards in 3:18 of game time, Aggies running back Devon Achane capped off the drive with a 26-yard touchdown scamper to knot the game at seven. Both teams’ offenses sputtered in the second quarter and they went to halftime in a tie game.

The third quarter was almost a perfect copy of the first, with short drives followed by the App State defense making a game-changing play. Senior defensive back Dexter Lawson Jr. forced a fumble and redshirt junior linebacker Nick Hampton ran from the line of scrimmage to the ball and recovered it.

“I’m proud of everybody. You know, at the game last week a lot of people counted us out, so we knew we were on a mission this week to get better. Communicating, chasing the ball, just coming together as a defense and find out who we really are,” Hampton said.

For the second time, the Mountaineers cashed in on a timely takeaway with a touchdown. Barbay fooled the Aggies defense by keying on the run then going play-action to a wide open senior tight end Henry Pearson for a nine-yard score. With 2:34 left in the third quarter, App State held a 14-7 lead before Achane responded again, returning the ensuing kickoff for a 95-yard touchdown, flipping all the momentum back to Texas A&M.

While the return touchdown tied the game at 14, the Aggies defense didn’t get a break and App State’s offense put together a signature drive. The Mountaineers methodically moved down the field, running 18 plays and chewing off 9:15 on the game clock, and Hughes earned his redemption with a 29-yard field goal to retake the lead with just over eight minutes to play.

“Getting manageable third and fourth downs because coach Clark is gonna go for it. Can’t come in here scared. To take control of the game like that and get it out of the hands of very talented offense and keep their defense on the field was a big advantage for us,” Brice said of the game plan.

When Texas A&M’s offense took the field again, it was the first time since 9:03 left in the third quarter. A crucial roughing the passer penalty by App State kept the Aggies’ hopes alive, and like many Mountaineers’ upset efforts before, their opponent was left with a field goal attempt to escape. This time, it was a 47-yard attempt that wasn’t even close. App State took over with 3:35 left to run off the clock, and after a first down, Peoples broke through for a 48-yard run and almost tip-toed for a score, silencing the crowd and putting the game on ice.

“We kept saying throughout the game, ‘hey, one’s gonna break’ … and it just broke at the right time. You know, that boy wanted the touchdown. You could see it, so I’m very happy for him,” Brice said.

Brice and the offense kneeled out the clock and the celebration ensued for the Mountaineers, and the App State faithful in attendance was heard loud and clear on the broadcast. From heartbreak to jubilation, the program had its biggest win since joining the FBS in 2014. While the game draws immediate comparison to the Michigan win, Hodges wants this team to have a legacy of their own.

The win was a result of the Mountaineers’ defense holding the Aggies to just 186 total yards while the deep stable of App State running backs had more rushing attempts than Texas A&M had plays from scrimmage.

Following the victory, chaos filled the streets of Boone with fans rushing King Street and diving into the Duck Pond.

App State moved to 1-1 on the season, earning the No. 27 spot in the AP Poll after the victory over No. 6 in the country. The scenes from Boone went viral and caught the eye of ESPN’s College GameDay. ESPN’s Rece Davis said the plan for the next site was College Station for the only ranked matchup between Texas A&M and Miami, but the Mountaineers victory stole the show, and their next stop is Boone for App State’s game versus Troy.

College GameDay in Boone will broadcast on ESPN at 9 a.m. Sept. 17, running until noon for the picks from Lee Corso and the crew. The home game kicks off at 3:30 on ESPN+, while the location of College GameDay and guest picker are yet to be determined.