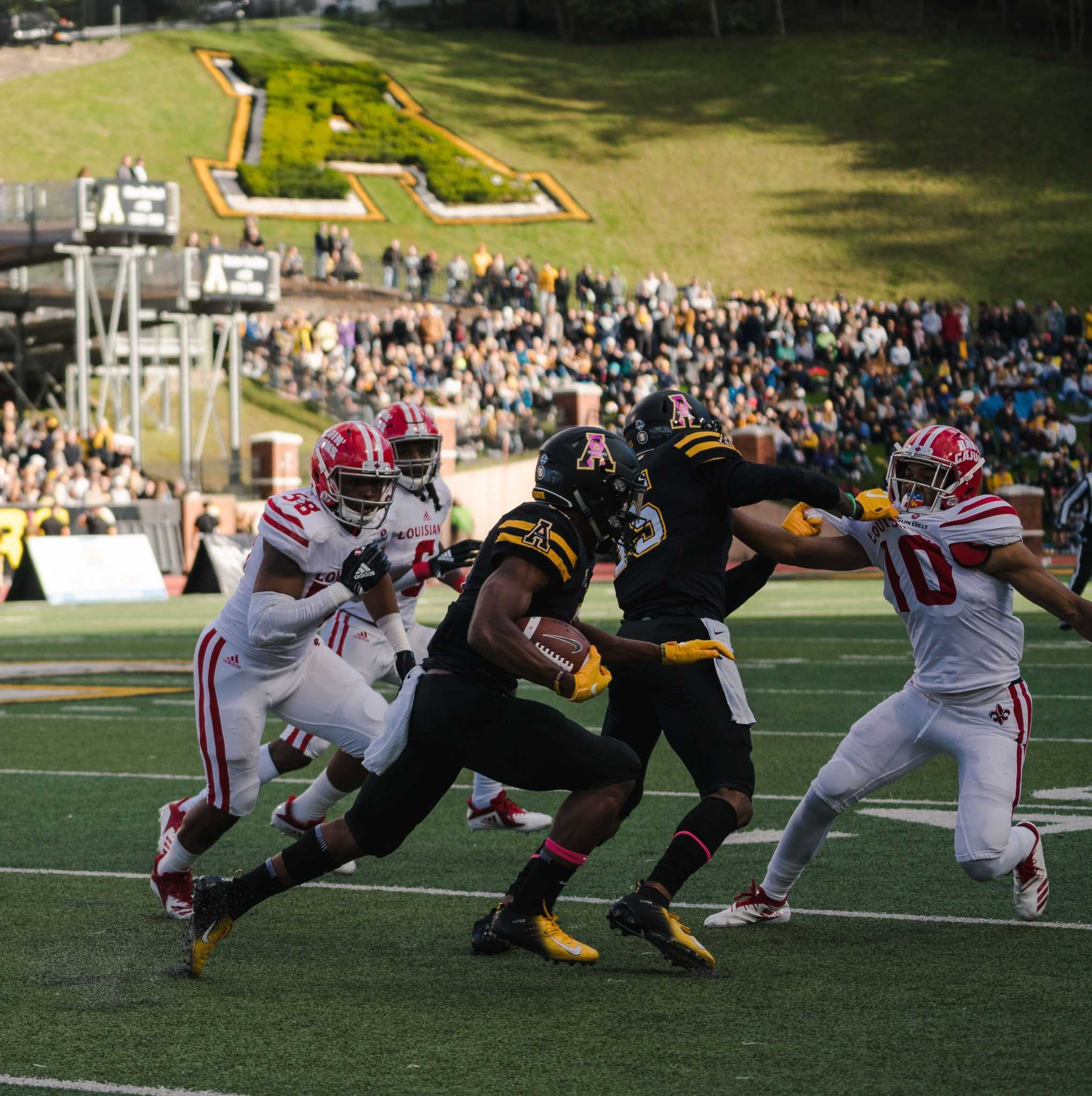 Redshirt sophomore running back Darrynton Evans breaks for the hole against Louisiana.

Even though the passing offense wasn’t as successful as it has been most of the season, App State was able to score timely points to distance themselves in the second half and cruise to the victory.

“There’ll be a lot of good stuff we can teach off of this film,” head coach Scott Satterfield said.  “When you’re teaching off this kind of film, this kind of game, you love for it to be a win and that’s what it was.”

Redshirt sophomore running back and wide receiver Darrynton Evans powered the Mountaineers’ offense as he finished with 186 rushing yards and a touchdown on 26 carries. He also caught a 20-yard touchdown pass to finish with 206 total yards on the day.

Evans’ 20-yard touchdown reception was a big moment in the game. Evans said once he saw the linebacker was too far away from him, he knew he had to score.

“I saw the linebacker, he was kind of trailing and then I’m like, ‘alright he’s kind of too far to keep up for a little bit,’ and then I saw the ball floating, I was like, ‘I gotta go track it down’ and I caught it,” Evans said.

Sophomore placekicker Chandler Staton was good on both of his field goal tries as well as his three extra points and totaled nine points on the day. Staton has been efficient all season long and leads the Sun Belt in points, averaging 8.4 per game.

Although the 17 points is the most the Mountaineer defense has allowed since the Penn State game in the first week of the season, the defense still played well enough to secure the win.

Although the linebacking corp did most of the tackling in the game, Davis-Gaither gave the credit to the defensive line.

“The D-line definitely did their part today, they played extremely hard like they always do and they cleared it up for us to play fast, read our keys and make the plays that we were supposed to,” Davis-Gaither said.

Even though it wasn’t the best showing for App State this year, Coach Satterfield was still pleased with the outcome.

“I’m proud of our guys, the way they fought, the way they continue to play,” Satterfield said. “They came up with enough plays tonight to win.”

The Mountaineers are set to play next on Oct. 25 in Statesboro, Georgia against the Eagles of Georgia Southern University in a battle of unbeatens in the conference (6-1, 3-0 Sun Belt). It will be a short week for the Mountaineers and a big game as far as the Sun Belt conference landscape goes, as well as being a rivalry matchup. Kickoff is set for 7:30 p.m. and will air on ESPNU.