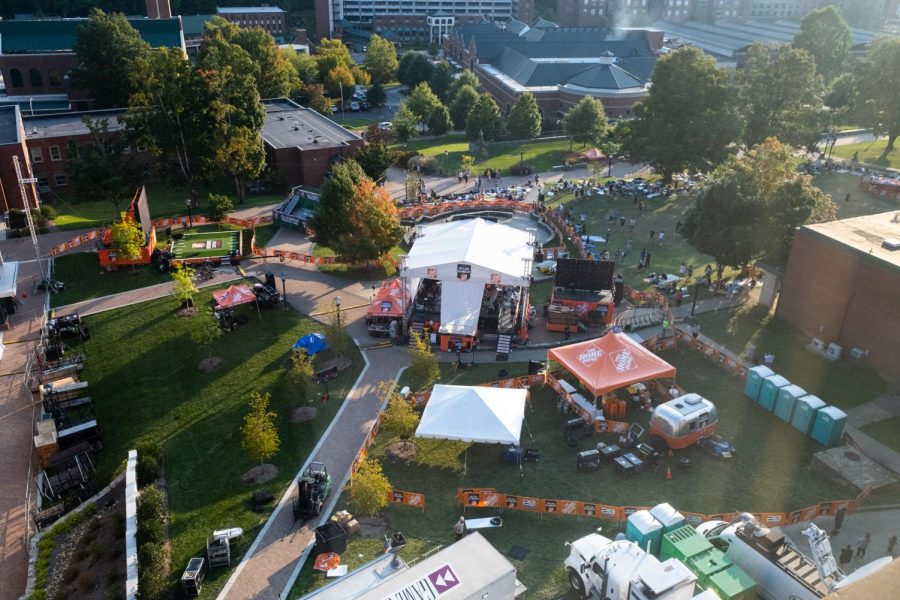 ESPN’s College GameDay set takes over Sanford Mall, Sept. 16. From Thursday until the end of the day Saturday, half of Sanford Mall was closed off for the set.

Following App State football’s victory over No. 6 Texas A&M, ESPN’s College GameDay announced they would be coming to Boone for the Mountaineers’ matchup with Troy. Sanford Mall turned into a full set while students greeted the crew with excitement and enough streamers to fill the street.

Students and fans camped out from Friday through the night for a spot in the front of the pit on Saturday’s show, some getting little sleep amid the excitement. People piled into the pit early in the morning, stacked with signs for a chance to win the poster contest and be on ESPN’s broadcast. Black and gold covered the grass of Sanford Mall while chants along with sounds from the Marching Mountaineers were in full-force. With Sanford Mall packed out, College GameDay went live from Boone at 9 a.m. with host Rece Davis proclaiming “Welcome to the High Country!”

THE SCENES FROM APP STATE 😍 pic.twitter.com/cNxOR3vL8F

The show ran till after noon with stories about App State’s history and videos of students jumping in the Duck Pond spread throughout the show. For the game picks, country singer and former App State student Luke Combs took the stage as the guest picker and there was no doubt about who he’d be taking for Saturday’s matchup. Combs picked the Mountaineers to win then the crowd roared as co-host Lee Corso made it a clean sweep and donned the Yosef head for the first time.

The celebration after the victory over the Aggies was unprecedented in Boone, comparable to the win over Michigan in 2007, but the winning play against Troy with 0:00 on the clock prompted a field rush from a sold-out Kidd Brewer, surrounding sophomore wide receiver Christan Horn after the game-winning catch. Throughout the excitement, chaos ensued with people trampling over one another to be in the celebration.

Once the experience on the field was complete, Mountaineer fans and students alike returned to the Duck Pond for what has become a recent tradition, diving in the water and flipping the duck house after destroying the baby sculpture a week before.