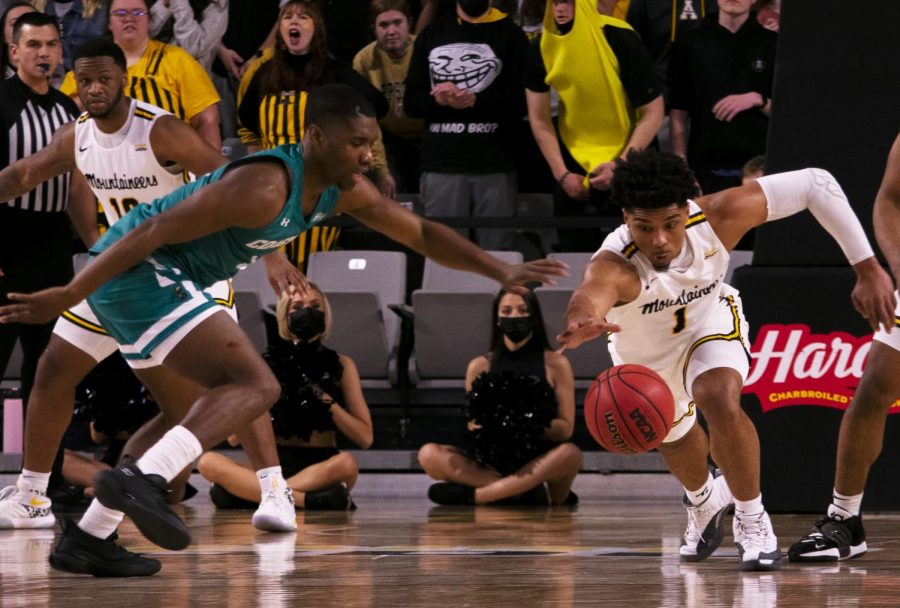 Senior guard Justin Forrest lays out for a loose ball in the Mountaineers' 61-60 Thursday night victory.

App State men’s basketball beat rival Coastal Carolina twice this weekend, once at home and once on the road. With the key wins, the Mountaineers’ record improves to 4-2 in the Sun Belt Conference.

The first victory for the Mountaineers came in Boone Thursday after senior guard Justin Forrest came up with a clutch block, stopping the Chanticleers from stealing the victory. The Mountaineers won the game 61-60 but shot 34.9% from the field and had some major shooting woes in the second half.

“Honestly, the stats will not say this, but some shots just would not fall,” said head coach Dustin Kerns. “We got some great looks. Credit to our guys. But we just could not get some shots to fall.”

Regardless of the below-average shooting night, the Mountaineers were still victorious, which Kerns credited partly to the fans. Nearly 3,000 people attended the Thursday night game in below-freezing weather.

“It’s huge. It was a difference maker,” Kerns said. “They helped us get stops at the end. There ain’t no question.”

While Delph started the game hot, scoring 11 of his 16 points in the first eight minutes, Gregory and Forrest led the team to victory with two huge plays in the final seconds.

Gregory hit a mid-range jumper with 31 seconds remaining, putting the Mountaineers up by two. Coastal later went one for two in free throws, which narrowed App State’s lead to one. Justin Forrest drew a foul but missed his free throw, giving Coastal the ball back with 5.3 seconds left. Forrest got revenge by blocking a last-second shot from Coastal to seal the win for the Mountaineers.

“That was huge for us right there. We needed that,” Gregory said.

The Mountaineers’ victory Thursday was not an easy one. The Chanticleers’ sophomore center, Essam Mostafa, posted a 19-point, 14-rebound double-double. Kerns made it a point to shut Mostafa down in the second half after an electric first half from the center.

“He’s a really difficult matchup. We gave him a couple different coverages, doubling him. We did one we’ve never done before, ever, and it worked to start the half,” Kerns said.

Despite the big man down low, the Mountaineers outrebounded the Chanticleers 43-35, and scored 14 more bench points than Coastal, which proved to be the difference-maker in the tight victory for App State.

The Mountaineers hit the road Saturday to play the Chanticleers again in Conway, South Carolina. App State had a strong start, leading by as many as 12 points early and held off the charging Chanticleers late to secure a thrilling 84-76 overtime victory, the first overtime game for either team this season.

The Mountaineers’ victory once again came on the back of Adrian Delph but with help from a double-double performance by senior forward James Lewis Jr. and a 20-point game by Donovan Gregory. Delph led both teams with 25 points, while Lewis Jr. put up 13 points and 14 rebounds.

Team shooting for the Mountaineers was 44% Saturday, an improvement of nearly 10% compared to Thursday night. The team was also able to hold key players for Coastal silent, including Mostafa, who had six points and seven rebounds before fouling out late in the second half.

The Mountaineers led by one point late in the game when Coastal’s senior guard Vince Cole was fouled in three point range. Cole missed two of his three free throws, keeping the score tied. App State outscored Coastal 14-6 in the extra period, giving the Mountaineers another victory over the Chanticleers.

App State once again outrebounded Coastal Carolina 38-34. This time, the Mountaineers depended on points in the paint, outscoring the Chanticleers 44-32 under the basket.

The next matchup for the Mountaineers is against the last-place Georgia State Panthers Thursday at 7 p.m. and will be broadcast on ESPN+.