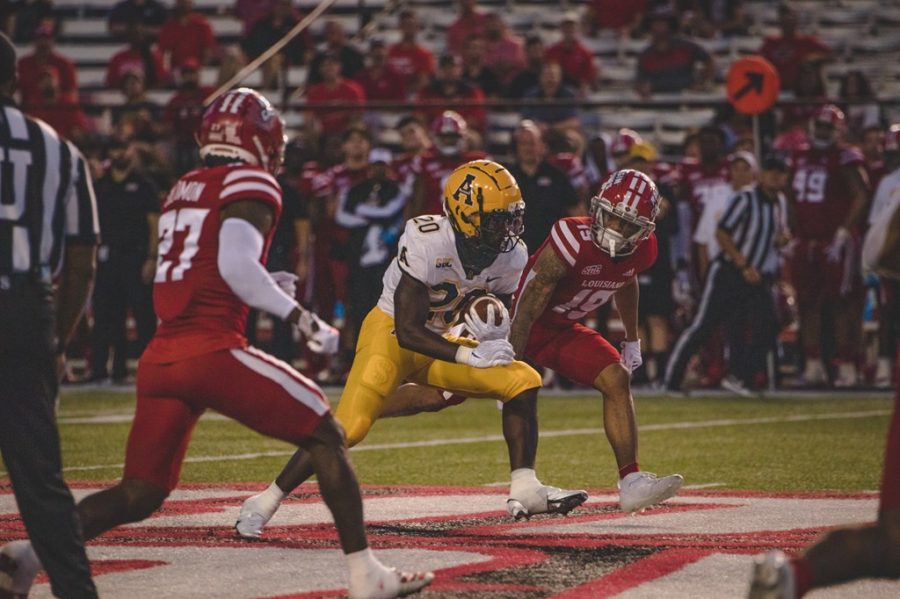 Sophomore running back Nate Noel braces for impact as he runs past midfield. Noel ran for 42 yards on 17 rushes, receiving 77% of rushing attempts given to the backfield.

In a big road game against the Louisiana Ragin’ Cajuns, the Mountaineers never found their stride and lost 41-13 in a contest dominated on the ground.

“Tough loss for our program. Tough loss for those guys in the locker room. We got beat in all three phases. Start with the head football coach. I got beat,” App State head coach Shawn Clark said.

Louisiana received the opening possession. On the second play of the drive, Louisiana quarterback Levi Lewis found wide receiver Kyren Lacy for a 55-yard gain, setting the Ragin’ Cajuns up in the red zone. On third-and-goal, Lewis ran it in for the early score.

App State’s opening drive resulted in a 31-yard field goal from super senior Chandler Staton. The Mountaineers went 62 yards in 10 plays to get on the scoreboard.

Louisiana opened its second drive with a 36-yard run to the Ragin’ Cajuns’ 49-yard line on the second play from scrimmage. On the next play, Lewis hit wide receiver Michael Jefferson for a 36-yard gain to the App State 15-yard line. On first-and-goal, Lewis found Lacy for the score, making it 14-3.

The Mountaineers’ second drive resulted in a fumble after graduate quarterback Chase Brice lost the football on an attempted lateral pass to sophomore running back Nate Noel on the App State 31-yard line.

“We talked all week on offense, we can’t turn the football over. We had four turnovers and couldn’t establish anything on the line of scrimmage,” Clark said.

After the turnover, Lewis found tight end Johnny Lumpkin for a 26-yard gain setting up first-and-goal. On third-and-goal, Chris Smith ran in for the touchdown. After missing the extra point, Louisiana took a 20-3 lead at the end of the first quarter.

Early in the second quarter, Brice threw an interception after hitting super senior Malik Williams in the hands.

After the turnover, Louisiana marched down the field. Lewis found wide receiver John Stephens Jr. for the first down after a second-and-21. After a stop on third down, Lewis hit wide receiver Errol Rogers Jr. to move the chains. In the red zone, Lewis was intercepted by App State senior Steven Jones Jr.

On the second play, senior running back Daetrich Harrington ran for nine yards for the first down. It marks Harrington’s first game since last season against Texas State. Louisiana would get a stop on a third down, forcing a 27-yard field goal from Staton.

“We were down two possessions, and I thought we were in a good spot that we go out and score. The first play, we call a deep post, and Virgil’s wide open, and we miss him,” Clark said.

Going into halftime, Louisiana commanded a 20-6 advantage over the Mountaineers.

After receiving the ball to start the second half, Brice fired a pass intended for super senior wide receiver Corey Sutton in tight coverage, and it was intercepted by Eric Garror. After taking over on offense, Smith broke through the Mountaineer defense on the second play of the drive for his second touchdown of the game, extending the lead to 27-6.

Brice and the offense responded on the next drive, marching down the field on a 13-play, 51-yard drive, capped off by a touchdown rush by Brice on a read-option that fooled the Louisiana defense to make it 27-13.

The Mountaineer defense followed up by forcing a three-and-out, quickly returning the ball to the offense.

After reaching midfield on the next drive, Brice and Sutton drew a pass interference penalty on Garror, who saved a likely touchdown with the foul. On the next play, deep in Louisiana territory, Brice was sacked, and the offense stalled out. The Mountaineers were forced to punt at the 34-yard line.

In the biggest drive of the game, Lewis started with a 10-yard pass for a first down, which sparked a long drive App State had no answer for. Louisiana chewed clock deep into the fourth quarter and ran for 87 yards on the drive, en route to a touchdown by Montrell Johnson to put the nail in the coffin for the Mountaineers.

A fourth App State turnover and a 26-yard touchdown run by Louisiana running back Emani Bailey buried the game for a 41-13 final.

Brice was 15-for-26 for 133 yards and a rushing touchdown with three turnovers. Super senior safety Kaiden Smith made 10 tackles in his second game back from injury.

“We’re going to find out what kind of team we have when we get back to Boone. I do believe the character in that room is something that our guys have a lot of pride in themselves, our program,” Clark said. “Our goals are right in front of us with Coastal Carolina coming in next Wednesday night, so we still control our own destiny, but congratulations to Louisiana-Lafayette on a great win.”

The Mountaineers take their worst loss in the Sun Belt since South Alabama in 2014 and have to regroup for the No. 15 Coastal Carolina Chanticleers, who come to Kidd Brewer Stadium Oct. 20 for a matchup that will likely decide the Sun Belt East division.