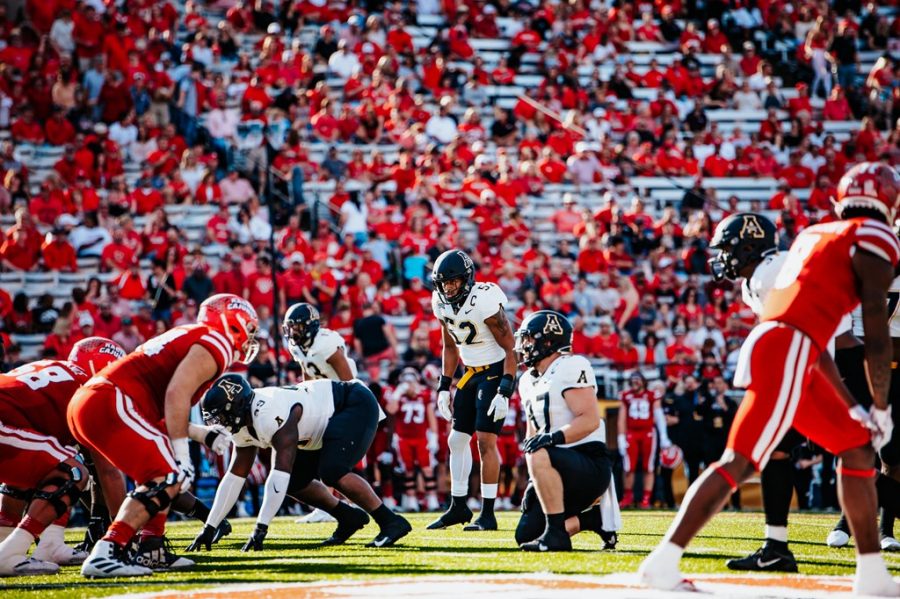 App State fell 24-16 in the Sun Belt Championship Saturday against No. 24 Louisiana, finishing 10-3 before its bowl game.

“A great football game against two really good football programs,” head coach Shawn Clark. “We have nothing to hang our head about. We’re sitting here at 10-3, and we have a lot of great players in that locker room. They’re hurt, like all we are.”

App State and Louisiana met in the only two previous Sun Belt Championship games, both 2018 and 2019 ending in Mountaineer victories. However, the Ragin’ Cajuns took home the Oct. 12 meeting between the two in a dominating 41-13 fashion.

Louisiana got off to a hot start offensively, taking two of its first four drives a combined 177 yards for two touchdowns. Ragin’ Cajun quarterback Levi Lewis threw for 73 yards on the opening drive and took a 43-yard keeper to the house three possessions later, boosting his team to a 14-0 lead.

“Levi, with his mobility, always gives teams problems,” super senior defensive back Kaiden Smith said. “We never backed down. We never lost confidence in what we could do. They just made a couple more plays than us.”

The Mountaineers struggled on offense early, gaining 49 yards across their first four drives, all resulting in punts. On their fifth drive, junior running back Cam Peoples received a handoff and sprinted 43 yards to the end zone, bringing the Mountaineers within seven.

After one more punt by each team, Louisiana drilled a 33-yard field goal with one second remaining to enter the half up by 10.

“They’re a really good defense,” Hennigan said. “But that didn’t intimidate us going into it. I still thought we played hard.”

The Black and Gold opened the half with a 15-play, 57-yard scoring drive that lasted 6:54. Super senior kicker Chandler Staton capped off the promising drive with a 36-yard field goal, drawing within seven once again.

Despite starting the half with an impressive drive, App State ran 10 total plays on its next three drives, only allowing its defense to rest for 3:22 across four Louisiana drives. The Mountaineer defense forced two three-and-outs and a turnover on downs during those drives but finally bent when the Ragin’ Cajuns went 72 yards in seven plays for another touchdown, extending the lead to 24-10.

“I just think in the second half they were just in more situations when they were up where they had more flexibility to run or pass, so I think we couldn’t necessarily come as downhill as we wanted to,” Smith said.

App State struck last on a 24-yard touchdown by Hennigan. Hennigan extended to snag a high pass from graduate transfer quarterback Chase Brice at the 12-yard line and made four defenders miss on his way to the end zone.

After a failed two-point conversion and a fumble by Brice in the final seconds, the Mountaineers were defeated 24-16.

“We talked about it all week long, we’re going to go for two to kind of define how we had to play the game on the way out,” Clark said. “Had a guy open, didn’t make the play, and we’re down eight.”

Louisiana outgained App State by 108 total yards, earning more yards through the air and on the ground. The Mountaineers only allowed the Ragin’ Cajuns to convert six of their 15 third downs and one of three fourth downs but converted just four of their own 15 third down attempts.

Brice completed 12 of his 30 pass attempts for 119 yards and one touchdown on the day. Hennigan led all receivers with six receptions and 71 yards, also tacking on one touchdown. Super senior receiver Corey Sutton caught two balls for 28 yards before exiting the game with an injury early in the third quarter.

On the ground, Peoples led the way with 61 yards despite only carrying the ball eight times. Sophomore running back Nate Noel ran for 42 yards on 12 attempts, and Brice logged 11 rushes for 53 yards.

“Second half, Cam got banged up a little bit and couldn’t play anymore,” Clark said. “We have to do a better job of being able to run the football when they have two deep safeties.”

Smith posted a game-high 12 tackles and one pass breakup, while senior linebacker D’Marco Jackson added 11 tackles, three and a half tackles for loss and four quarterback hurries. Junior linebacker Nick Hampton came away with two sacks and senior defensive back Shaun Jolly broke up three passes as the Mountaineer defense finished with more sacks and tackles for loss than the Ragin’ Cajuns.

“For me, I was just flying around. I didn’t want to leave anything out there,” Smith said. “I’m really proud of how our defense played because that’s just how our mindset is.”

With the loss, App State fell for the first time in a Sun Belt Championship game after winning the conference’s first two, dropping to 10-3 on the season.

The Mountaineers take on Western Kentucky in the Boca Raton Bowl Dec. 18. The game will be broadcast live on ESPN at 11 a.m.