Mountaineers upset No. 14 Chanticleers for first ranked win since 2007 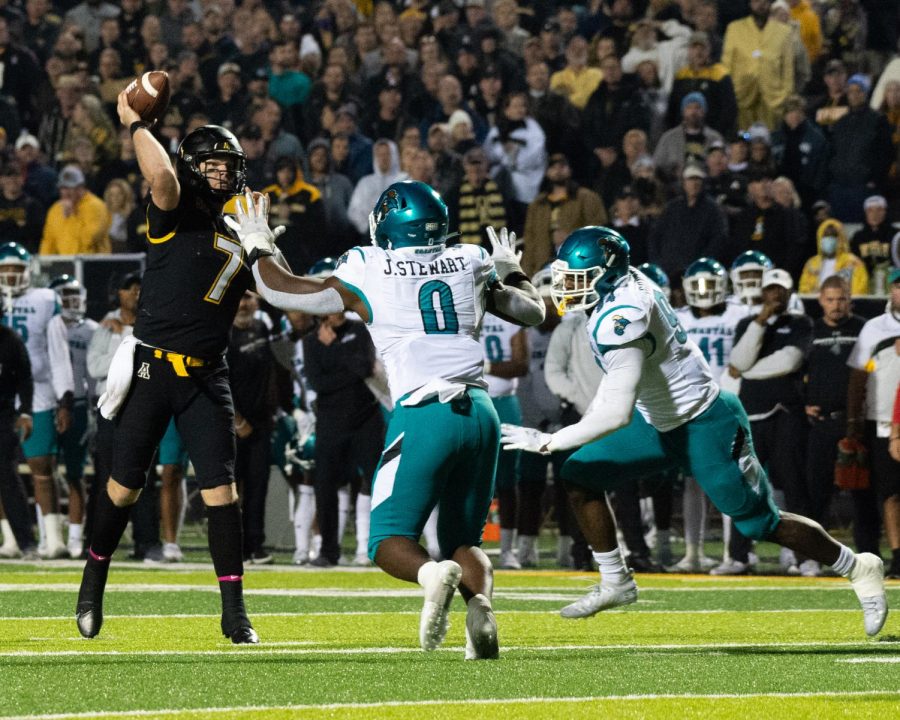 Graduate transfer quarterback Chase Brice let’s the ball fly with two Chanticleers in his face. Brice posted 347 passing yards and two touchdowns against a defense only giving up 15 points per game.

“How you like me now?” App State football head coach Shawn Clark said as he walked into the press conference following the win against No. 14 Coastal Carolina, his first ranked win as a head coach.

In front of a sold-out 31,061-person crowd, the fourth largest in App State history, the Mountaineers stunned the Chanticleers 30-27 Oct. 20.

“When you can pack The Rock on a Wednesday like that, a sold-out game, have people coming from all over the place just to support us after last week? I mean, that’s a sweet feeling,” senior linebacker D’Marco Jackson said. “This was an all-around great win for App Nation as a whole.”

The Mountaineers started their opening drive strong. Sophomore running back Nate Noel exploded for a 39-yard run, but the Mountaineers were stopped on the Coastal Carolina 28-yard line after super senior receiver Malik Williams was unable to corral a pass from graduate transfer quarterback Chase Brice on fourth-and-three.

Down 14-0 with 0:41 left in the first quarter, Brice found Williams for a 45-yard gain, and then once more for a 32-yard gain, reaching the one-yard line the next play. Junior running back Cam Peoples capped off the six-play drive by crashing into the end zone, cutting Coastal’s lead by seven.

On the ensuing kickoff, App State went for an onside kick. Sophomore receiver Milan Tucker recovered the kick one minute into the second quarter.

“I thought we kind of needed to change the momentum of the game, and Michael Hughes and Milan Tucker executed it to a tee. No one knew except Milan and Michael Hughes that we were going to do it, so that’s even the better part about it,” Clark said.

Following the recovery, it took less than 42 seconds for App State to score a second touchdown, making the score 14-14.

“Go down 14, we just need one play that’s just gonna give us that spark, so I mean, once we had that, it all got together,” Williams said.

After a pair of slow possessions from both teams, Chanticleer kicker Massimo Biscardi knocked a 50-yard field goal through the goalpost to retake the lead at 17-14 with 2:23 left in the first half.

The Mountaineers looked to respond quickly, moving down the field via short slant throws and Brice running the ball. However, wide receiver Corey Sutton fumbled a pass with 0:13 seconds to go, resulting in the Chanticleers recovering the ball and kicking another field goal, making the game 20-14 at halftime.

With the Chanticleers starting the second half on offense, the Mountaineer defense forced a punt after giving up one first down.

Taking over the ball, Brice and Sutton connected for two big completions on the drive for 68 yards, the second being a 28-yard snag in the corner of the end zone to give App State a 21-20 lead.

The Chanticleers fired back, putting together a nine-play, 83-yard touchdown drive, ending with a one-yard run by Jones to take the lead back at 27-21 with 4:36 left in the third quarter.

The Mountaineers swung back with a touchdown drive thanks to Peoples breaking loose for a 43-yard touchdown, his second score of the game. The extra point failed after the snap was fumbled, keeping the game at a 27-27 gridlock.

Junior linebacker Nick Hampton ended the third quarter with a sack, giving App State some momentum going into the fourth quarter. Super senior defensive end Demetrius Taylor joined the party in the backfield on the next play, sacking McCall for an eight-yard loss. Coastal Carolina was forced to punt for the third time in the contest.

“Every single day, right before we go out as a D, I said we need to strike fear in every single person on that field with our attitude,” Jackson said. “That was the thing coming into the game. We need to get in his face, disrupt him, get him out of his element.”

On a crucial third down, Brice threaded the needle to Sutton for a 32-yard gain. A leading score looked almost certain before senior running back Daetrich Harrington coughed the ball up near the goal line, and C.J. Brewer recovered the fumble for the Chanticleers.

“We have a very stingy defense, and they held up their end of the bargain … reduce those two turnovers, and it might be a little bit different turnout of the game,” Brice said. “Luckily, we pulled it out.”

The Mountaineer defense rallied, forcing a Coastal Carolina punt with 3:53 left in the game. Brice found his favorite target of the night in Williams for a pair of catches, totaling 35 yards to put App State at the Chanticleers 25-yard line.

Noel drove the Mountaineers to a crucial third-and-one with 2:04 remaining with Coastal Carolina out of timeouts. On the biggest play of the game, Brice fooled the defense on a read-option and converted the first down.

App State ran the clock down to three seconds, setting up super senior kicker Chandler Staton for a game-winning 24-yard field goal. In a silent crowd, Staton put it through for the win, and App Nation stormed the field.

“Tonight is the exact reason I came back. When we got done with last year, I wasn’t ready,” Staton said. “The way that we came back from last week and prepared all through practice, it was a completely different vibe, and being around people like that is the reason I came back.”

The upset marks the Mountaineers’ first win against a ranked opponent since the storied 2007 victory over Michigan at the Big House. Fittingly, it ended with a field goal, and App State now controls its own destiny in first place of the Sun Belt East.

Brice finished with 381 total yards and two passing touchdowns while Williams, the best-performing “No. 14” of the night, put together a career night, totaling 10 catches for 206 yards and one touchdown. The super senior wideout is the first App State receiver to reach over 200 yards in a game since 2012.

“Right now, I’m just getting an opportunity to flip the script on certain things about me that get talked about and written up about, so that’s kind of my goal,” Brice said.

The Mountaineer defense stifled an offense averaging 48 points a game and scoring just seven in the second half. Coastal Carolina also ran the ball 29 times for 55 yards, averaging less than two yards a carry. Jackson finished with what has become a routine double-digit tackle night, totaling 11 tackles.

For App State, it’s sweet revenge following the heartbreaking loss in Conway last season,  and the opportunity is now theirs to win out and play in the Sun Belt Championship game.