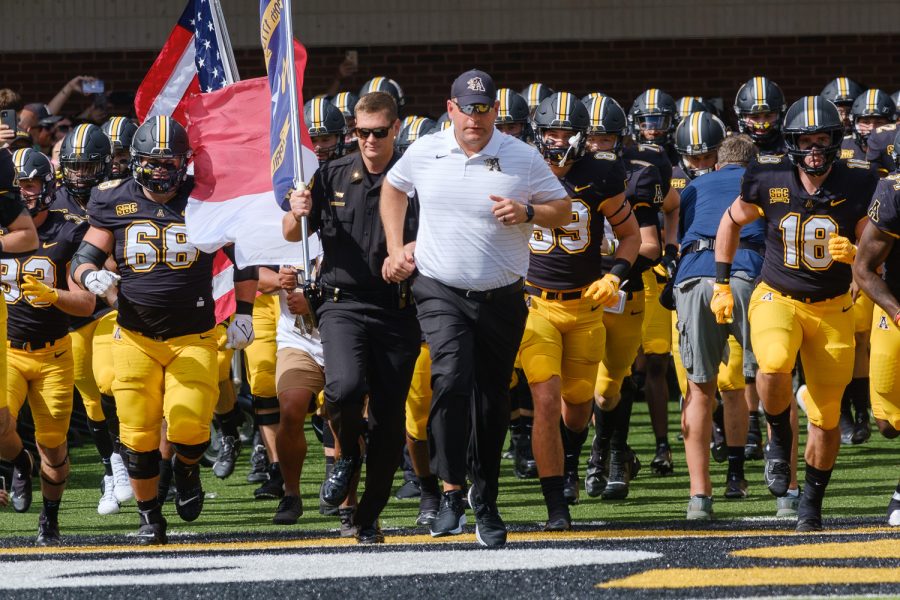 App State football head coach Shawn Clark leads his team into Kidd Brewer Stadium for the first time during his second season in the role Sept. 18, 2021. Clark opens his third season as the Mountaineer head coach in 2022 against North Carolina.

The Mountaineers and Tar Heels have met twice before, splitting the two matchups. North Carolina won 56-6 in 1940, while App State secured a 34-31 victory in 2019. The Sept. 3 matchup will be the Tar Heels’ first ever trip to Boone.

Both teams begin the 2022 season with uncertainty at positions that were occupied by school record-setters for the past several years.

App State returns redshirt senior quarterback Chase Brice, redshirt junior running back Camerun Peoples and sophomore running back Nate Noel, a trio that accounted for 48 of 55 touchdowns scored on the offensive end in 2021. Four of five starters on the offensive line also return to Boone for the 2022 season.

On the defensive end, the Mountaineers welcome back 14 players that finished the 2021 season with double-digit total tackles. Senior linebacker Trey Cobb racked up 75 total tackles in 14 games in 2021, also picking off three passes. The Georgia native ranked second on the team in total tackles and interceptions.

First on the team in interceptions was redshirt senior defensive back Steven Jones Jr., who returns for another season after coming away with five picks for three touchdowns last year. Returning redshirt junior linebacker Nick Hampton accumulated 69 tackles and a team-high 11 sacks, while junior linebacker Brendan Harrington finished with 31 tackles, including five tackles for loss in 13 games.

Shawn Clark enters his third year as the head coach of the Black and Gold, holding a 20-7 overall record since earning the job in late 2019. Clark’s contract was extended through the 2026 season after leading the Mountaineers to a 10-4 record in 2021.

North Carolina enters the new season without former quarterback Sam Howell, who was drafted by the Washington Commanders after setting numerous school records in Chapel Hill. One of Jacolby Criswell or Drake Maye will likely replace Howell as the starting quarterback, neither of which saw major action in 2021. Both quarterbacks attempted a pass in just two games last season. Criswell finished with 13 completions on 21 attempts, good for 179 yards and one touchdown. Maye concluded the season with seven completions, 89 passing yards and one touchdown.

The Tar Heels return one of the nation’s top receivers in Josh Downs. Downs set school records for catches and receiving yards in a season last year, finishing with 101 receptions and 1,335 yards.

The Tar Heels begin their season with a home contest against FCS opponent Florida A&M Aug. 27.

The highly-anticipated Labor Day weekend matchup between the Mountaineers and Tar Heels kicks off at noon Sept. 3 in Kidd Brewer Stadium. Tickets to the game currently sell for a minimum of $287 on stubhub.com, with some soaring past the $900 mark. The game will be streamed live on ESPNU.