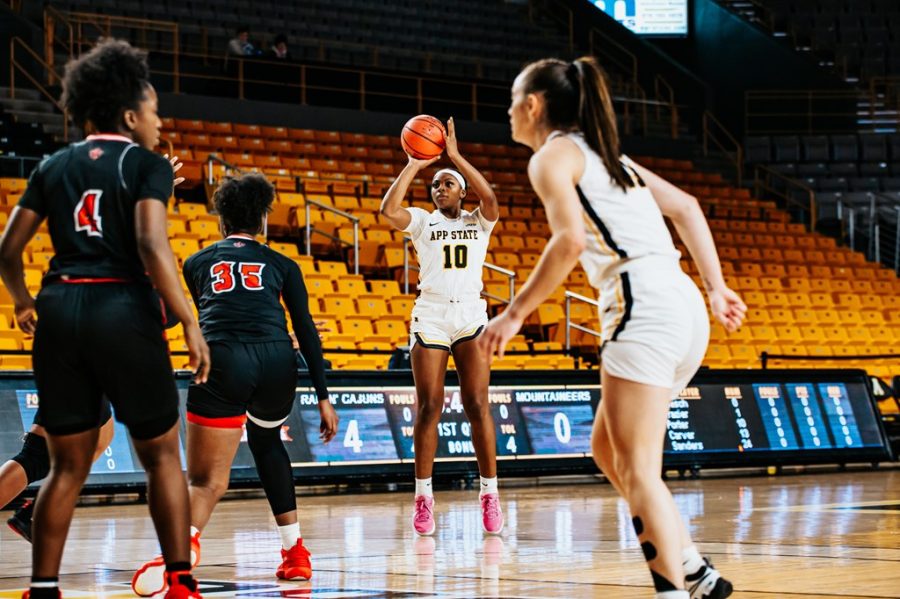 In what was a special night for App State women’s basketball head coach Angel Elderkin, tallying her 100th career win, the Mountaineers took down the Louisiana Ragin’ Cajuns 55-46 at the Holmes Convocation Center.

“This game was very important to us,” senior forward Alexia Allesch said. “We all went out there and played for coach Angel, and she means so much to us. We left everything on the court, and we got that win for her.”

This was just the fourth loss all season from the Ragin’ Cajuns, and after losing five games in a row, the Mountaineers claimed their second straight victory.

“Honestly, I thought when we went on the road at Arkansas State after being off, I was really proud of the way we played,” Elderkin said. “We finished the non-conference, and we didn’t finish well, but we were battling some injuries, and I felt like we were back in Arkansas. We took a little step back today not having everyone, but we’re all still on that same mission, and you can see the growth.”

Defense was the focal point for the Mountaineers, holding the Ragin’ Cajuns to four points in the second quarter and 14 points in total for the first half, the lowest point total for an opponent in the first half all season against App State.

The Mountaineers dominated most of the game and extended their lead to 12 by the end of the third quarter. In the fourth quarter, the Ragin’ Cajuns crawled back to cut the lead to four with just over three minutes left. Clutch free throws by junior guard Janay Sanders and freshmen guard Emily Carver put the Mountaineers up six with 20 seconds to play. The Mountaineers closed it out for a 55-46 victory.

“This just shows that we hit a rough patch, losing four or five games in a row, but we came back tougher, stronger and more motivated,” Elderkin said. “This is a big win for us.”

Two days later, the Mountaineers returned to Holmes Convocation Center to face Louisiana-Monroe, which resulted in a 67-61 win.

“ULM really gave us a good game,” Elderkin said. “We knew coming in that they were playing some really good basketball. Their game had gotten canceled at Coastal Carolina, so they were kind of waiting for us fresh.”

The Warhawks came out of the gates hot, finding themselves with a 7-1 lead nearly four minutes into the game. That lead didn’t last for long, as the Mountaineers went on an 18-2 run in the remaining six minutes of the first quarter, leading ULM 19-9. Twelve of those 19 points were off of forced turnovers, as five different Mountaineers recorded a steal in the first 10 minutes of the game.

App State knocked down seven of 11 shot attempts in the first quarter before going cold in the second. ULM climbed out of its 10-point first quarter deficit, trailing the Mountaineers 27-22 going into halftime. App State shot an abysmal 3-17 from the field in the second quarter, going 0-8 from three-point range. Sanders led the Mountaineers in scoring with nine points in the first half.

Allesch continued her dominance in the fourth quarter after scoring seven of the team’s 20 third quarter points. Allesch added nine more points in the fourth quarter to keep the Mountaineers in the driver’s seat for most of the quarter. With 18 seconds left, ULM cut the App State lead to four. Senior forward Michaela Porter was fouled with 16 seconds left in the game and made two clutch free throws to give the Mountaineers a 67-61 win. Allesch finished the game with a season-high 20 points and 16 rebounds.

The Mountaineers are on a three-game winning streak, putting them at the top of the Sun Belt Conference as they boast a 9-8 overall record, including 3-1 in conference.

“We’ve tried to challenge them every day to come in with a 1-0 mentality,” Elderkin said. “I’m proud of our group. We have won three in a row, but on Monday, when we all get back together, it’ll be the same mission: 1-0.”