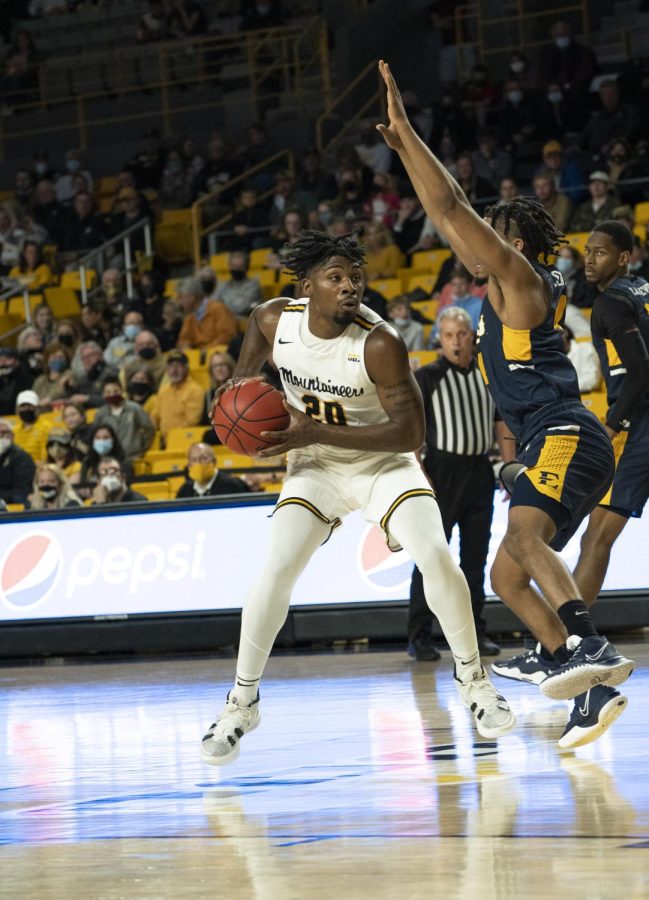 Senior Adrian Delph jumps to a stop at the high post in App State's home opener. Delph scored 72 points across the Mountaineers' three games in the Gulf Coast Showcase.

App State men’s basketball played in the Gulf Coast Showcase, a three-day tournament consisting of eight teams from across the country. The Mountaineers ended the tournament with a sixth place finish after winning only one of three games played.

In the first matchup, App State suffered a 75-68 defeat against Delaware. Senior guard Adrian Delph scored a career-high 39 points, the most from a Mountaineer in a single game since Ronshad Shabazz had 47 at the University of Louisiana at Monroe in 2019. Super senior guard Justin Forrest was the next highest scorer with 10 points. Delaware had a more balanced performance with four players scoring in double figures, led by Ryan Allen’s 22 points. The Blue Hens shot 61% from the field and made 18 of their 21 free throw attempts.

App State was down by 11 points with 4:28 left in the game and held Delaware to zero field goals the remainder of the game. While the defensive effort was strong, the offense couldn’t take advantage, and the Mountaineers lost by seven.

The second game the Mountaineers played was a 57-45 win against Akron, their only win of the tournament. Graduate student guard Michael Almonacy led App State with 18 points on 7-12 shooting. Delph struggled following his career game and only had 11 points while shooting 3-17 from the field. Junior forward Donovan Gregory provided a strong performance off the bench with 14 points, shooting 100% on field goals and from the free throw line.

With 12:07 left in the first half, Gregory hit a jump shot that gave App State a lead it never gave up for the remainder of the game. As a team, the Mountaineers made only 18 of 51 field goals but made up for it at the free throw line, making 15 of 18 attempts.

In the final game of the Gulf Coast Showcase, App State lost 65-63 to Vermont in a thriller that came down to the final shot. The Mountaineers led for more than 32 minutes of the game but couldn’t hold on to the lead late in the second half as Vermont went on a 12-5 run over the last 4:08 of the game. Delph hit a three-pointer to tie the game at 63 with 16 seconds left, but Catamount guard Ben Shungu responded with a game-winning shot at the buzzer.

App State had three scorers in double figures; Delph had 22, Forrest added 16, and Almonacy tacked on 14. Delph’s 22 put him over 1,000 career points, the 35th Mountaineer to achieve the feat. As a team, the Mountaineers had more made shots and a higher shooting percentage than Vermont, but the difference was at the free throw line. The Catamounts sank 15 of 18 attempts from the line, 10 more than App State.

With one win and two losses, App State stands at 3-4 overall. The last three losses the Mountaineers suffered were by a combined 10 points. App State gets a four-day break to regroup before a home matchup against Hartford Nov. 29.