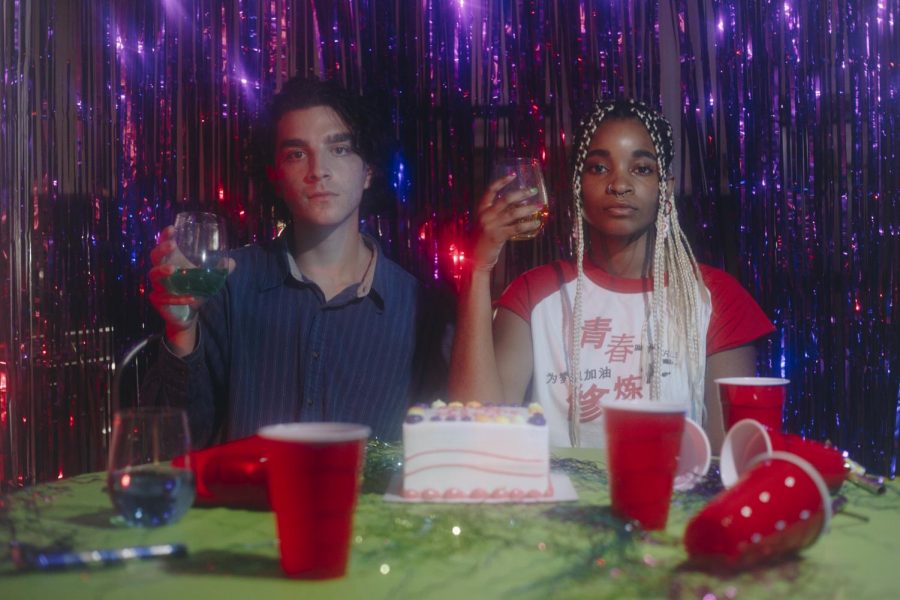 From a small spare bedroom, two App State students have spent the past six months recording and releasing new music.

When Nooria Lawrence and Nick Fiori first crossed paths in 2020, they were not expecting to become friends, much less a band.

Fiori happened to be in the crowd the night Lawrence was performing at a local house show.  That night was when their interest in collaborating musically was born, he said.

“Before that I don’t think he knew I could play the guitar or sing,” Lawrence said.

Lillie Pond, an App State student who was also in the crowd, described it as the perfect night.  “Everyone in Boone fell in love with her,” she said.

Apart, Lawrence and Fiori are opposites. Lawrence said it’s probably the funniest thing about them being in a band together. Sitting next to one another, Fiori in a baggy brown sweater and Lawrence with long pastel blue braids, the two even seem like an unlikely pair.

“I loved playing guitar by myself,” Lawrence said. “I realized I only hated it when teachers were telling me what to do.”

Lawrence does all of the band’s writing and vocals. Fiori, an environmental science major at App State, ditched playing soccer in high school to focus on learning guitar and music production.

“My parents were like ‘if you’re not going to (play soccer), then you need to find something else,’” he said, “and that was my transition from sports kid to playing music.”

Fiori plays guitar and does all of the production and mixing for the band. It took Lawrence and Fiori weeks to come up with a fitting name for the band. They wanted something that paid homage to their contrasting personalities. Lawrence said she remembers being at work when the name Color Shy dawned on her.

“The color part would be for me, and the shy part is for him,” Lawrence said.

Color Shy first released music on Sept. 25. The single, “Light Leak,” has been played over 3,000 times on Spotify since. The sound sits comfortably between bedroom pop and indie rock.

“It suits them very well and feels very personal to who they are,” Pond said.

The band’s second release, “Strife of the Party,” came a month later as a full EP. Five songs capture what it’s like to be at a party, surrounded by your closest friends, and “still feel like the only one in the room.”

Pre-COVID, Fiori’s house was known for being the place that all of their friends could gather for a good time.

Fiori and Lawrence remember meeting for the first time at a birthday party for Sarah Devoti, the photographer behind their EP cover.

Devoti and Lawrence spent weeks brainstorming ways that they could draw from the party theme of the EP.

“I was obsessed with these really pretty cakes,” Devoti said.

So, she bought one, she hung tinsel, littered plastic cups and confetti all over Fiori’s house, and they shot the EP cover.

“Some of their songs are about parties and moments we had at that house,” Devoti said. “I don’t know if you’d call it nostalgia, but it just felt really nice to have a reminder of these really sweet memories that we all had with each other in that space.”

Now, as Fiori makes plans for his upcoming graduation, Color Shy is working to complete their first full-length album.

Fiori and Lawrence gave Pond, who is featured on the new album, a sneak peek of some of the new songs. She is really excited about it, she said.

With Fiori’s improved production skills and a newfound trust in one another, Color Shy’s sound is “a step up” from what listeners might expect, according to Lawrence.

“The vocals are Phoebe Bridgers, the lead guitar is Tennis, the drums are Alex G,” Fiori said.

Lawrence and Fiori said the title of the new album is a work in progress, but they are striving for a release in late March.