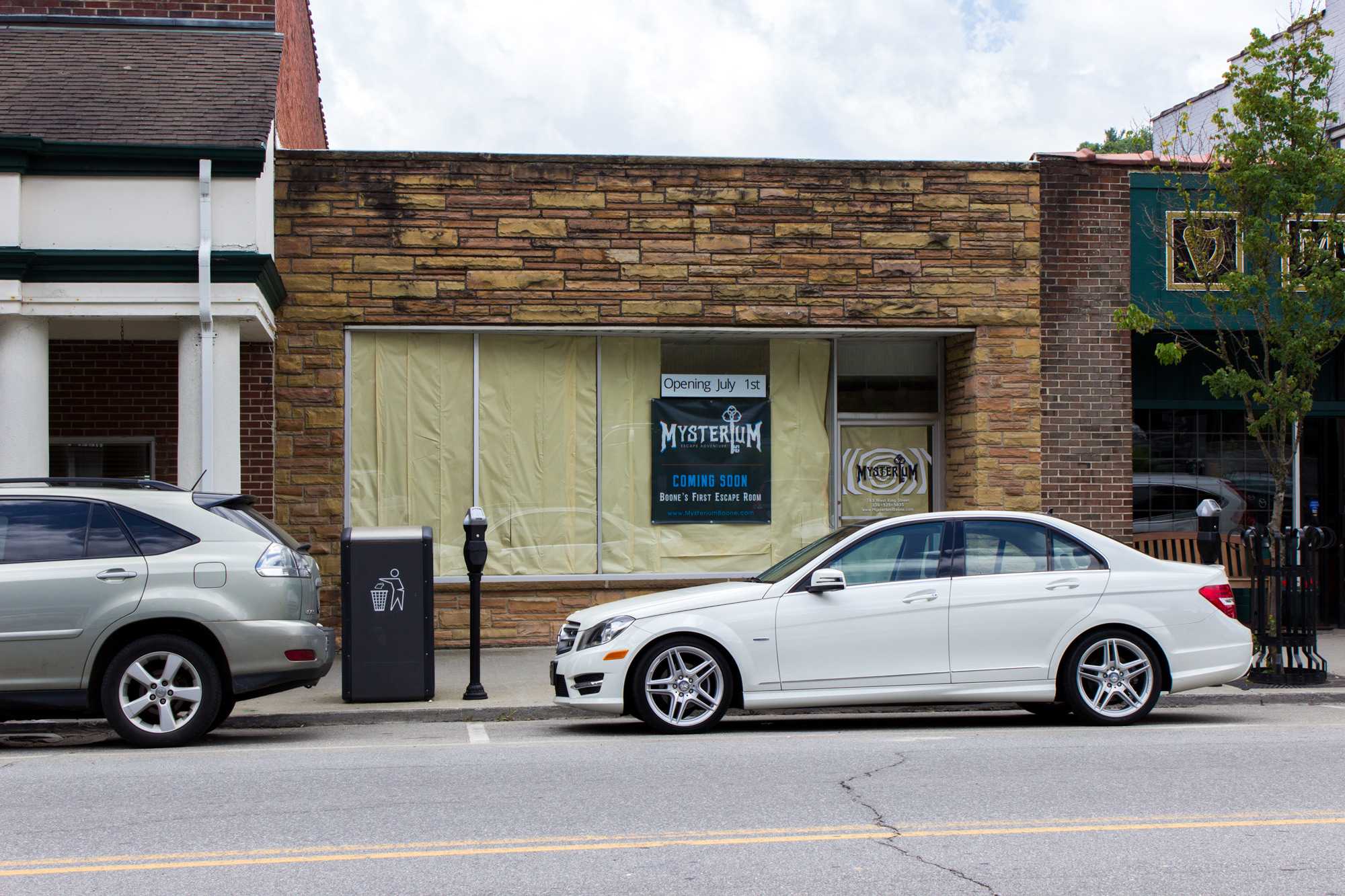 The idea of an escape room came to Shaun Cardwell, the owner, operator and builder of Mysterium, last year.  Cardwell said it all started with his interest in haunts, which are activities such as haunted trails or haunted houses. With the help of Andrew Johnson, the associate builder and operator of Mysterium, they started to make the idea a reality.

Mysterium was inspired by haunts but is not scary, Johnson said.

Cardwell said that the name Mysterium came from a combination of the words ‘mystery’ and ‘emporium.’

“Andy’s finance put together those two words and it was perfect because we are essentially an emporium that hands out mysteries,” Cardwell said.

Cardwell said he has done several haunts in the Wilkes County area where he is from. When he was 12 years old he made his very first haunted trail in the woods behind his house. At age 16 he created his very own haunted house, and it was Cardwell’s love for film and Halloween that sparked his interests in escape rooms. Cardwell said that one day he came across an article about including the idea of escape rooms into a haunt and that is when he started thinking about creating his own escape room.

Johnson is a Traphill native and he met Cardwell while taking his film class at Wilkes Community College. Since then, Johnson and Cardwell have worked together on a comedy webisode series called “Shortbus TV” and has helped out with various haunts.

Johnson said that he was originally going to school for video game development but then met Dave Reynolds, actor and former theater director at Wilkes Community College. He got involved with theater work, from costumes, makeup, lights and even acting in different productions. However, Johnson said he found that there was “no evidence or proof” of his work in theater and started getting into film. There he met Cardwell, his former film teacher at Wilkes Community College.

Cardwell pitched the idea to Johnson in December. Then the duo visited Exit Strategy in Charlotte, which according to their website is the largest escape room in the country. When they failed to escape, Cardwell and Johnson said that they were instantly hooked.

Cardwell said the best things about escape rooms is being stuck in a room with strangers and having to all work together. He said that they had a blast even though their group did not make it out, and it makes you realize the amount of teamwork that goes into escaping.

“My girlfriend noticed something in one of the rooms and she didn’t say anything and then we got stumped and had to get a hint,” Cardwell said. “Turns out, that the littlest detail that she found but didn’t mention was exactly what we needed.”

Everyone has to work together and talk that is why escape rooms are great for team building exercises, Johnson said.

The location opened up on King Street in February 2016 and “everything fit together so well,” Cardwell said. The duo started building props and developing a story in March, and on July 1 Mysterium will be open to the public.

Cardwell said even though Mysterium is a smaller space, he and Johnson have paid close attention to detail within the room.

“That is what separates us from other escape rooms, as well as having a very interesting story line,” Cardwell said.

The biggest appeal in escape rooms, Cardwell said, is that it incorporates everything that they have done in haunts, theater and film. He said that it brought those three aspects together all in one project that they can do year round.

“The room itself looks pretty standard on the surface,” Cardwell said. “But then you start digging and finding clues and things and that’s when you realize, we have incorporated a lot of interactive things under the surface.”

Everything has an extra layer of meaning, and nothing is what it seems, Johnson said, and that is the whole idea of escape rooms.

Johnson said that they have taken that idea even further and have a lot of clues that are interactive. For instance, if someone opens something it will cause something else to happen.

“There are hidden compartments, elaborate keys and ciphers,” Johnson said. “It is crazy and a lot of fun, you won’t realize how fast your hour goes.”

Cardwell and Johnson explain that when people arrive they are asked to leave their personal items, especially cell phones, in the lockers in the lobby. Then they are taken to a room where they watch a video that introduces the character and storyline. They are also briefed on what they have to do before they come into the room itself.

The room has two doors, one that is locked immediately after entering and remains locked for one hour, and the other is an emergency exit that is always unlocked. Cardwell said that there is always someone monitoring the room from outside.

“If they make it to the end, then we have this finale that wraps up the storyline so it is like living out a real life mystery,” Cardwell said.

The introduction video features actor Dave Reynolds, who Johnson said “brought the character, Thaddeus Ambrose to life and did an amazing job.”

Cardwell explained that initially he had the idea of a character who was “the most interesting man in the world meets Indiana Jones.” The famous world traveler and eccentric, rich person, Thaddeus Ambrose. Ambrose has since passed on and left his inheritance to his nieces and nephews, who are the people who come to experience the escape room.

However Cardwell said, “nothing comes without a price. Ambrose created this labyrinth of clues and puzzles so that you, the escaper, will have to work for your inheritance. You have to solve all this stuff to escape and inherit his fortune.”

Johnson said this was the initial idea, but has since evolved from there and there is an added, “big twist at the end, if people make it that far, which i hope they do because it is awesome and we want them to see it.”

Johnson said that if you successfully escape within the 60 minute time frame, you will be taken to the safe where Uncle Ambrose’s fortune is housed and you’ll have your picture taken and put on the wall.

Cardwell said that another thing that is offered at Mysterium to make it a fun experience for everyone are a certain number of hints. Cardwell and Johnson said that they are both aware how tough and frustrating it is when they were stuck on a clue at Exit Strategy.

“There are a few times where you have to reach but you are not going to want to put your arm in whatever contraption that Shaun thought up, even though it is 100% safe,” Johnson said.

One thing that Cardwell and Johnson are considering, like at Exit Strategy, is having a Sunday to try again at a discounted price to escape the room if you did not get to the last time.  They said that they plan to do something fun for the people who do not escape in under an hour.

“Hopefully you leave with more questions than answers,” Johnson said.

Cardwell said that they have an ad spot in the football programs, and are a part of chamber of commerce and the Downtown Boone Development Association. Cardwell and Johnson have other “interesting ideas” for what they want to do to advertise in the fall.

“If we can get enough participation, somewhere in downtown we would hide a packet that has two free tickets and everyday we would release clues on Facebook,”Johnson said. “It will be like a  riddle clue escape game outside.”

They also like the idea of geocaching, which is where people hide items and seek them with a gps. That way it takes the adventure outside of Mysterium and gets people involved in the community, Cardwell said.

Cardwell and Johnson both said that they have had great reception in Boone.

“Everyone has been so cool, the people at the chamber of commerce said that Mysterium sounds like fun, and that they were happy that we are here,” Cardwell said. “It’s been awesome we are so stoked and not used to this kind of reception.”

If Mysterium is successful in the near future, Cardwell and Johnson plan on changing things up every couple of months. They said they will change the way the clues work so that no one gives anything away. However, the storyline will stay the same. They said that if Mysterium is still around a couple years down the road, they will redo everything, including the storyline.

As for now, Cardwell and Johnson are definitely considering adding a second escape room experience with a different storyline or expanding their current room and adding in more clues.

Mysterium is open during the week Tuesday through Thursday from 12 p.m. to 7 p.m. and on the weekend from 12 p.m. to 10 p.m. Prices are $25 per person and Cardwell said there will eventually be a student discount with ID for $15 per person.