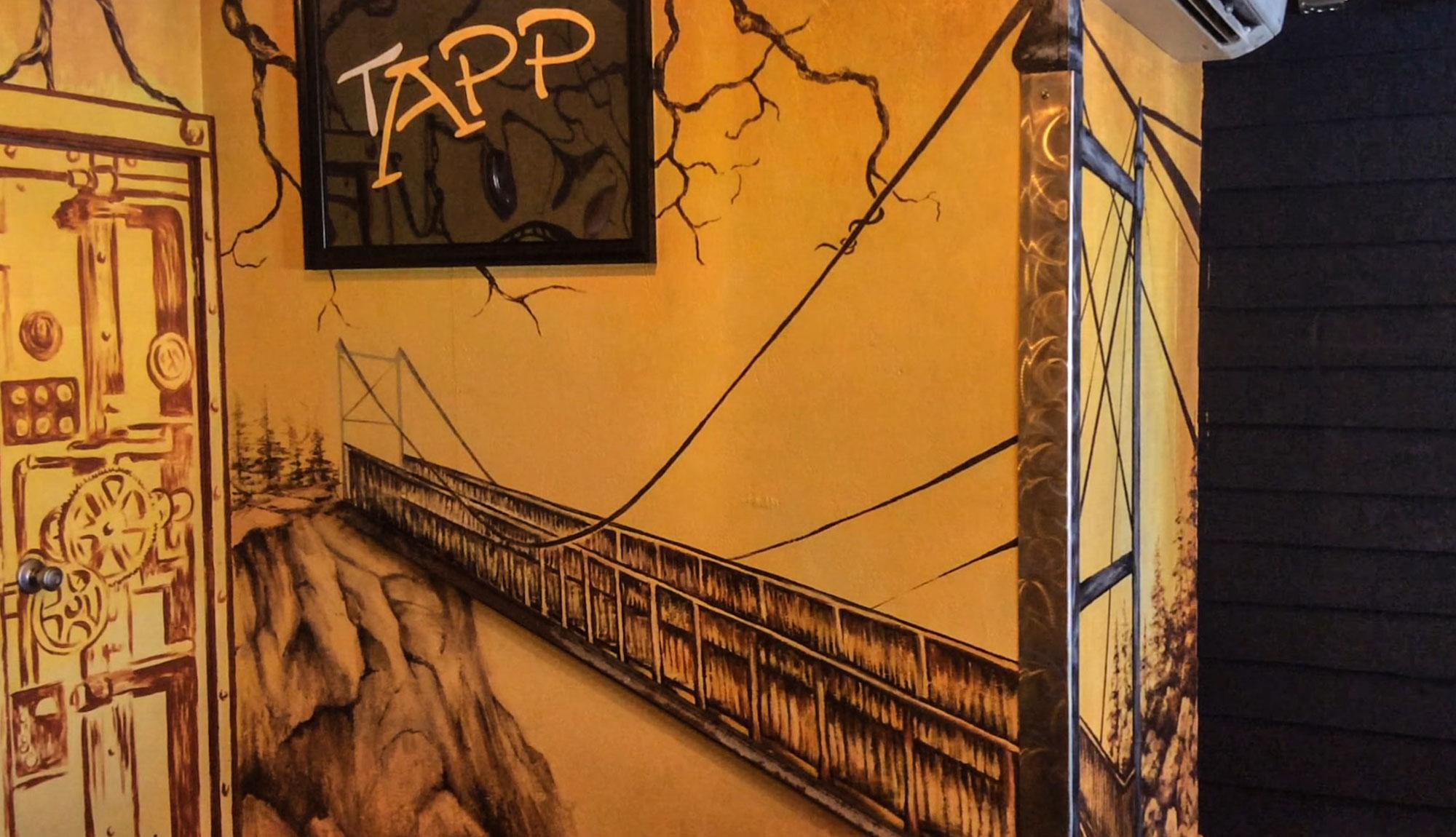 Part of the 3-D mural by Dabney Smith on The Annex's stage.

The Annex, which took the place of Klondike, is the newest addition to the trailer bars and an extension of TApp Room that offers a music venue, arcade games and an additional bar.

“We needed the extra space and the parking more than anything,” Joshua Keranovic, assistant kitchen manager of TApp Room and the music coordinator for The Annex, said. “We have always joked about kicking this place over, expanding and blowing out a wall and it kind of became a reality.”

The Annex was purchased by TApp co-owners Danny Mauney, Meredith Williams and Bill Schneider in August of 2016 after Klondike’s closing. Keranovic said annex, by definition is an extra, auxiliary room and that is where the name of the bar came from. The process of opening The Annex took six months and constant discussion, Keranovic said.

Keranovic said at first, management and Pierce were not sure of what to do with the extra space. Back in the 1990s, Keranovic said, Klondike had a reputation of being the spot with great music. With there already being a stage, Keranovic said they are incorporating Klondike’s preceding reputation and are going to see how it goes.

Keranovic said The Annex differs from other bars because it is essentially a separate bar. Keranovic said there is different house music in each establishment and when there are live shows, someone sitting on the other side of the bathrooms in TApp would not be able to hear the live music in the stage room of The Annex.

“You can sit there and hang out with your friend and talk and it’s not like there is even a bar,” Keranovic said. “You can walk into this side and it is like a whole other bar that you didn’t have to wait in line for, get your ID checked again or even go outside. And you know, Skee Ball is cool.”

Since the opening of The Annex, Keranovic said business has been crazy and awesome.

“We have definitely picked up a lot, especially being across from the Convocation Center with basketball games like yesterday for example, it was crazy,” Keranovic said.

Allie Murphy is a bartender at TApp room and she said with the addition of The Annex there is more to do like play arcade games and pool.

“We have a different crowd now too, and the music venue has been a lot better and there is always a good crowd here, regulars even love it,” Murphy said.

Murphy said with the extension, the bars have a better bottled beer section and there is more room for different liquors as well as more draft selections. “Now we have 26 [draft beers],” Murphy said. “So we have a range for everyone; if you like dark beer or IPAs, we have a range of every kind for you.”

Murphy said as far as customers, TApp and The Annex have many more late night people come in and it is a different scene.

“It is not like a college party scene that it used to be with Klondike,” Murphy said. “Now it is more so live music venues. Last night we had a bluegrass band, it is just a different kind of scene.”

Murphy said nights at TApp before when both Klondike and Parthenon closed down, no one would come out because they would be worried that they would be stuck there.

“It was like, you can come here and have a couple drinks, but you can’t drive out to other bars because we are not near anywhere else,” Murphy said. “So it has definitely helped out a lot business wise, for all of this to be open because there is more for every kind of person.”

Ed Copeland, App State alumnus and father to App State students, is friends with the owner and heard about the addition of The Annex said his first thought was, “they needed the space, and this will be great for ball game weekends.”

Copeland said having an extra bar will speed up the bar traffic on weekends is nice as well.

When Copeland walked into The Annex, the pool table was the first thing that caught his eye because he and his son love to play pool when they go out.

“My son shoots pool,” Copeland said. “So, I can’t wait until I tell him they have a pool table in here now.”

The Annex at TApp Room is open Monday through Saturday 11:30 a.m. until 2 a.m. and Sundays from noon to 10 p.m. The Annex hosts trivia nights on Mondays and closes their bar side on Sundays, but the rest of the restaurant is open.