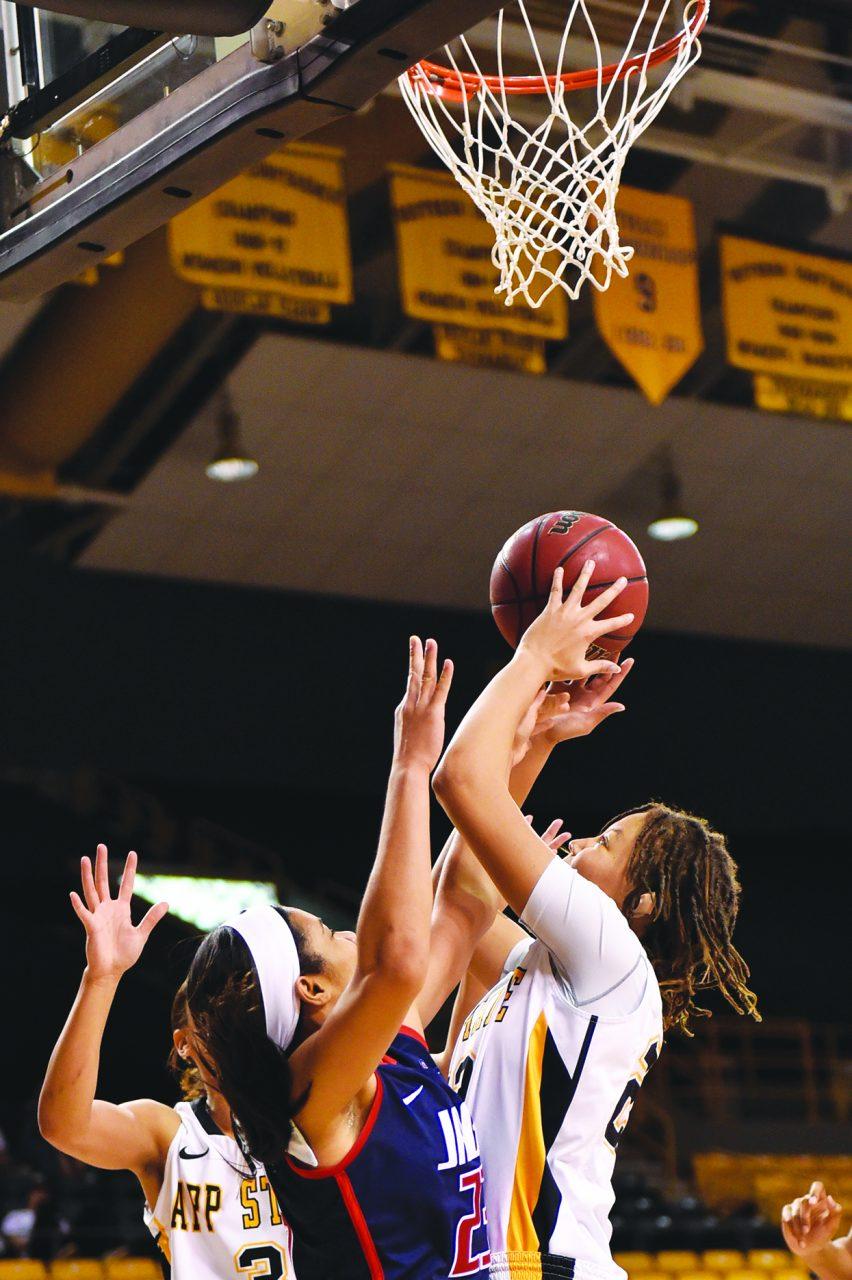 Former App State forward Keke Cooper fights through the defense for a lay-up against South Alabama.

The women’s basketball team will begin its season on Nov. 9 at the University of Alabama-Birmingham. From there it will play even tougher non-conference teams, namely Georgia Tech, Clemson and South Carolina—who made it all the way to the Elite Eight last year. These tough teams will be a good test for the Mountaineers, who finished 15-18 overall last year.

New faces will look to help several key returners better the team with the aspirations of competing for the Sun Belt title. The women’s basketball team added four freshmen and a transfer who will be eligible this year. Transfer redshirt junior point guard Ashley Polacek, comes from the University of Central Florida, where she started 38 games, according to App State Athletics.

Polacek was tenth in assists for the American Athletic Conference her freshman year and wants to bring that success to Boone. She said having to sit out last year due to NCAA transfer rules was more beneficial than anything.

“It helped with the system. I got to watch film. Now I know what’s coming up,” Polacek said.

She also said that being at App  State felt right.

Polacek is one of many ballhandlers the Mountaineers have, but assistant coach Christina Centeno said she knows Polacek will make a huge contribution no matter how much she gets to play or how often she gets the ball.

“Ashley has the ability to push it up the floor,” Centeno said. “She can come off pick and rolls and create her own shot. She can pick apart the defense and get the ball to others.”

Centeno, who enters her second year as an assistant at App State, is a guard coach, but also helps with every player. She spoke about the incoming freshmen, and said that all four were a great fit for the program.

“Brooke, she can play the point and the wing. She can really get up the floor and will be really productive for us in transition,” Centeno said about Brooke Bigott, a freshman point guard from Katy, Texas, anticipates making an immediate impact.

Joining Bigott in the freshman class at the guard position is North Carolina native Emma Newton, who Centeno describes as “interchangeable.”

Centeno also pointed out how the other two freshmen, forwards Haile Mcdonald and A’Lea Gilbert, are good fits for the program App State is building. Both will play big roles on the defensive side of the ball, Centeno said, and they will also look to bolster rebounding, something App State struggled with last year.

Overall, the team looks to better itself this year with the help of all newcomers and returners. They are ready to face the tests they have made for themselves in their non-conference schedule and understand that they will be great learning experiences.

“Those are going to be great games for us to prepare for the conference schedule,” Centeno said.

Photo By: Courtesy of Justin Perry