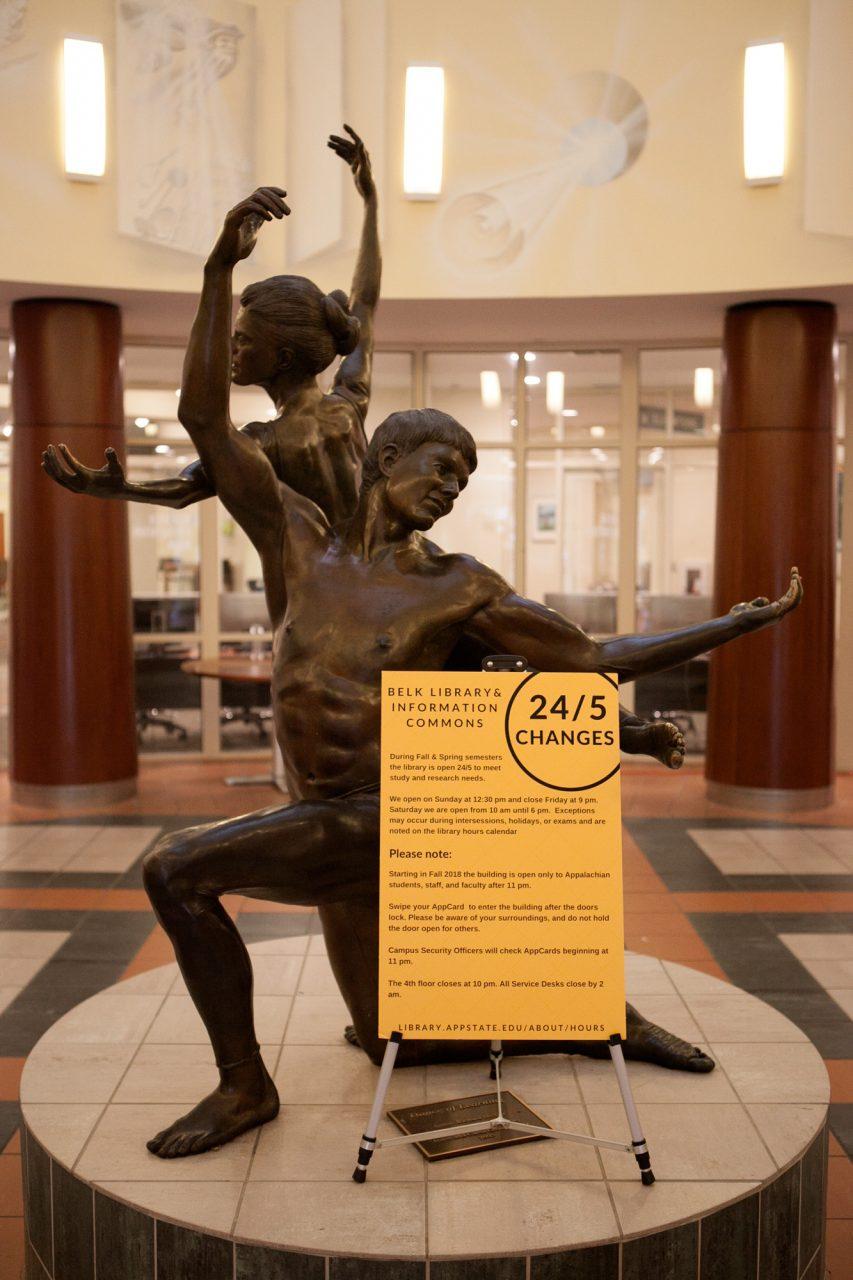 Security guards sweep the floors of Belk Library as it draws near 11 p.m. New security measures require students, frantic for a long night of studying, to show their AppCard after 11 p.m.

Although the Belk Library hours have not changed, a new security measure has been installed at both entrances of the building, requiring an AppCard swipe from all students entering after 11 p.m. Students already inside at that time must show security their student ID when prompted in order to stay in the building, Ericka Patillo, associate dean of university libraries, said.

The main service desk on the first floor will continue to close at 2 a.m. followed by the technology desk and the print help desk at 3 a.m.

“We are open 24/5 and have been for several years,” Patillo said. “We have a security force at night to monitor things, and, in conversation with ASU police, we decided it would be useful to bump back ID requirement a little earlier.”

Patillo said that, with the new ID check, students must remember to have their identification on them.

Improvements have also been made in accordance with student study patterns. The research project “User Experience (UX) at the Belk Library” conducted by library staff during the last couple of weeks was instrumental in understanding specific study needs by using attitudinal research surveys, focus groups and user interviews.

Cubical-like desks have been added to the third floor at the start of this school year to eliminate visual distractions for those who prefer to study in an individual environment. Since the project’s conclusion, more white boards, desks with lights and power, and furniture have been ordered to be placed throughout the building, Patillo said.

“It was a research project that divided the library into zones, and, throughout the day, the employees would carefully count students and observe what they were doing in order to figure out how students use the space,” Patillo said. “The library staff was given student feedback in various ways as they were trying to monitor the change in student needs.”

Library staff is raising awareness about other aspects not commonly known among the student body. Within the building, there is a music room with two guitars open to students with a passion for the art of music.

“We have an audio room, and it is sound proof so you can not only just jam, but also record and create,” Patillo said.

As far as structural changes go, more than 75 percent of the interior of the library has been painted, and the Fox Family Reading Room has been refurbished for user comfortability.