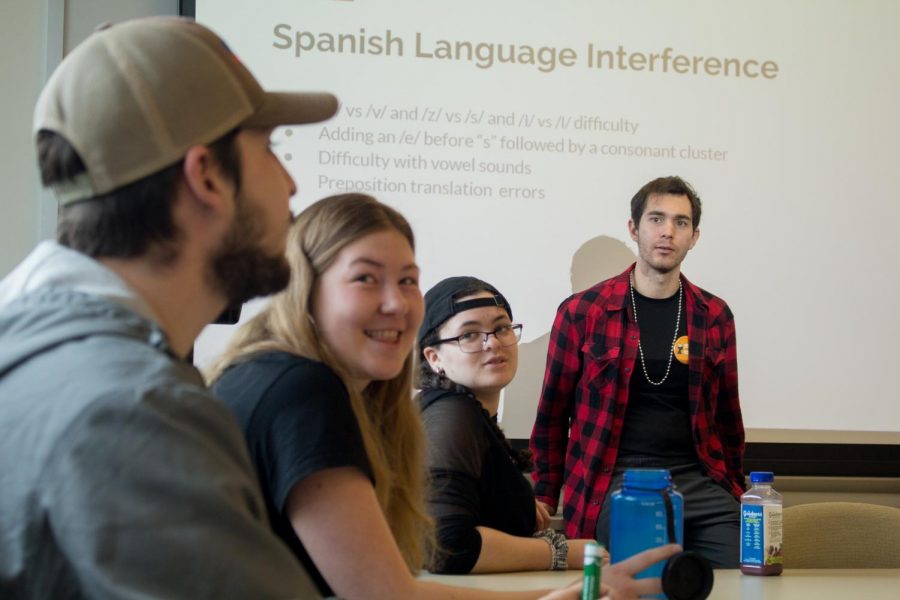 The meetings for the Lin⟪ Club are located in Appalachian Hall Room 085. Most meetings are based on a certain topic but the discussion is open for any questions that come up.

On a campus without a linguistics major or minor, the linguistics and language club hopes to provide a space for students to share a love for language.

Spanish professor and club advisor Benjamin Souza had five students in his Spanish phonetics and diction class last fall who were interested in exploring linguistics.

“We were super jazzed about (linguistics). We absolutely loved the subject, so we would always get off-topic in discussions, and Souza would eat it up, and we would have 30-minute tangents,” vice president Marly Roberts said.

Roberts said she and a couple of other students would meet outside of class to discuss linguistics and language.

“Dr. Souza suggested that we start a linguistics club to have a space in order to cultivate our shared interest, recognizing that there were other students at App who were bound to share a similar interest for linguistics,” Elliott said.

During club meetings, students discuss topics from language interference to how dialects differ.

Roberts said although the club was started by students studying Spanish, the club is not exclusive to Spanish speakers. There are also club members who are studying German, French, Japanese and Chinese.

“Having a linguistics club on campus allows people to learn more about the importance of language and how we use it,” Elliott said. “It also promotes the idea of linguistic diversity. Everyone has a different way of speaking. However, not one language or dialect is better than another. Learning about linguistic diversity promotes awareness and tolerance.”

The meetings are held during the afternoon so members can grab lunch together while they discuss that week’s topic.

Souza said he did not find his love for linguistics until taking an introduction to linguistics class during his undergraduate senior year.

“This lightbulb went off that this is what I had been looking for, and I didn’t even know I was looking for it,” Souza said. “A person might not know they are interested in (linguistics) until they find out what it is about.”

Souza said he hopes interest in the club will help eventually bring a linguistics program to campus.

“We are becoming a more multilingual nation. It is an important part of being a member of an international community,” Souza said. “Anything we can do to keep language learning on the forefront is essential.”

The linguistics and language club meets bi-weekly on Wednesdays from 12 p.m. to 1 p.m. at Appalachian Hall in Room 085.