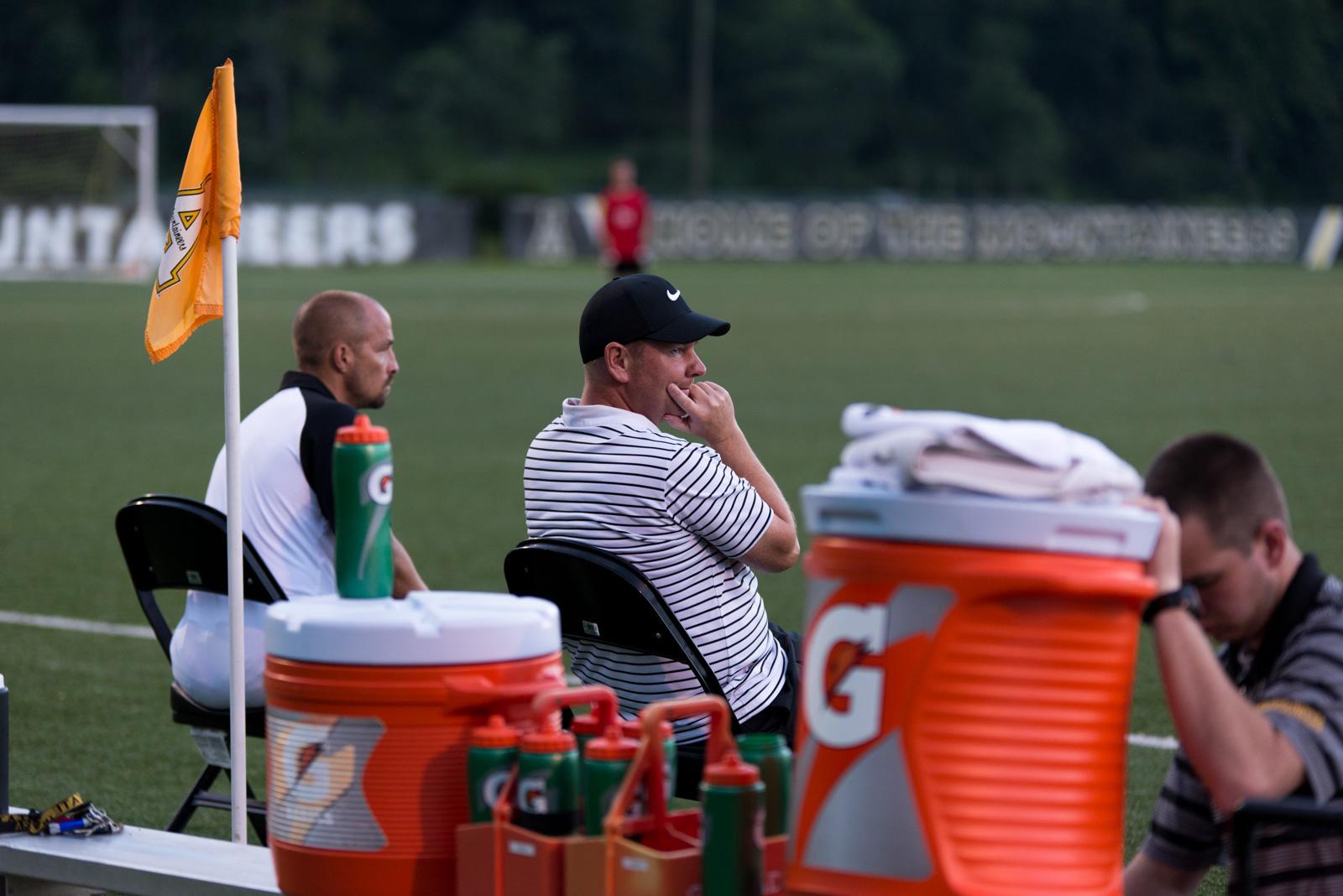 Assistant Coach Jeff Bilyk and Head Coach Jason O'Keefe watching the exhibition on Friday. “Today we wanted to look at the relationships out there and some of them worked out pretty well. Some we have to look at and continue to tweak,” O’Keefe said. “But it was really just about getting these guys a run out with 13 new guys at the Mack.” Photo by Dallas Linger, Photo Editor

“I think I would describe him as a realist and a winner. He tries instilling that into us every single day, and not just on the field but in the classroom, in the community. He’s trying to make us into better men and ultimately make this program go on the up.”

O’Keefe comes to Boone after a 16-year coaching career that saw stops at top tier programs like Wake Forest, Saint Louis and North Carolina. His resume boasts eight conference titles, seven NCAA Tournament appearances and a nod as the 2012 National Soccer Coaches Association of America Assistant Coach of the Year.

O’Keefe is also an accomplished recruiter, putting together back-to-back top 10 classes at North Carolina, as well as recruiting several SoCon Player of the Year award recipients during his time at Elon.

O’Keefe arrived on campus this past spring and says that finding permanent housing for his family has been the only challenge to settling into the high country.

“The school’s been great, the people are great, I couldn’t have anything bad to say,” O’Keefe said. “The guy’s have given me everything they had, the administration has been extremely supportive, the community has been awesome so I am real excited to be here.”

While O’Keefe has extensive experience as an assistant coach, this is his first head coaching opportunity since being promoted to associate head coach during his time at Elon. He is confident he is in a position to succeed.

“I am going to handle it in stride,” O’Keefe said. “I know there [are] going to be ups and downs, there are challenges out there but I am excited about what we are building.”

O’Keefe acknowledges the professionalism and atmosphere he learned at North Carolina as key but says that all of experience leading up to this point has been valuable.

“North Carolina obviously is a great place, unbelievable people, first class everywhere you turn,” O’Keefe said. “I have been blessed from grinding at Greensboro College, to going to Wake Forest and learning from one of the best tacticians in the country in Jay Vidovich and then going on to Cincinnati and learning more from Hylton [Dayes] and then to Elon with Darren Powell, to Mike McGinty, I have learned every step of the way at every place I have been.”

As the season gets closer, it will become clearer how close O’Keefe is to his goal of a top 20 ranking. The last thing he points to for immediate impact is community leadership.

“I think we are going to need guys on each line to lead, from the goalkeeper to the back line into the midfield up to the forward line, we are going to need a leader in each line,” O’Keefe said “We have got too many new players, we are trying to implement new things, we cannot rely on just one guy it is just not realistic.”

O’Keefe has already made changes in the name of this mission, starting with changing former star defenseman Jordan Melia to midfield.

“The biggest thing is that we need more leadership up the field, we have got some young guys in some spots up there and in the spring he was able to bring a leadership role,” O’Keefe said. “It is kind of an experiment, [but] he has been open-minded, he has been on board, trying to do whatever we ask.”

Even with a resume as impressive as O’Keefe’s, what really matters is what takes place on the field. As the season inches closer, O’Keefe hopes to improve all aspects of the team and their game.

“I wish there was one but there is a whole laundry list of things, which is fine, it is early. We may have a few more things to work on but we are not backing away from that,” O’Keefe said. “The guys are not shying away it, they are not hiding from it. Everyday we are trying to get better.”