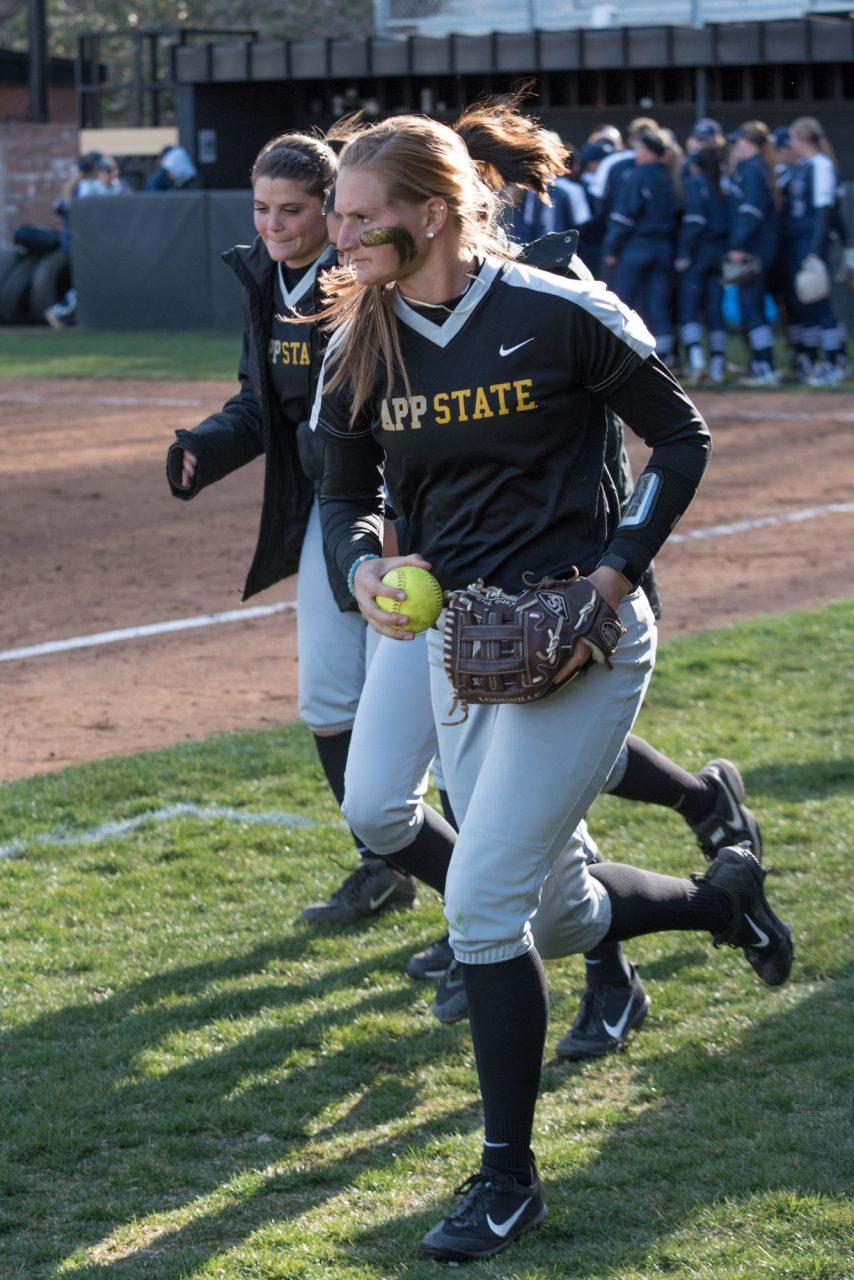 App State softball players keeping warm by running down the side of the field in the 2017 season. The first spring home is Saturday, March 3rd at 1 p.m.

After a disappointing 2017 campaign resulting in a team record of 14-34, the App State softball team has decided to turn in a different direction. Heading into the 2018 season, the Mountaineers are giving the keys to 18-year veteran Shelly Hoerner, who has compiled over 500 career victories. Hoerner has held head coaching jobs at several other schools during her career but none more notable than her last four years with the Georgia Tech Yellow Jackets.

It was evident that changes had to be made after the Mountaineers’ struggles in recent years. This is where the 2017-2018 recruiting class comes into play, as App State begins the season with nine new freshman. With this influx of new young talent, the Mountaineers are hoping to see a change in team performance and culture.

“Really what we’ve done is build the mentality of a family atmosphere,” Hoerner said. “Obviously there’s always talent, but we’ve got to get that mentality that you’ve got to love one another to play for one another.”

The riggers of a full softball season can often seem like a marathon and it takes its toll on a team. They go through losing streaks, injuries, heartbreaking losses, academic struggles, internal conflict and countless other stresses over the course of a whole season.

These stresses build up and can drive a player crazy if they do not have a strong support group around them. When the players can go to their teammates and talk about their problems as if they were family, it lets everyone relax and manage their struggles. Hoerner emphasizes family for this reason and truly believes the stronger the unit, the stronger the team.

“The expectation is that we win ball games here at App State,” Hoerner said. “It is not so much about hitting home runs as it is about getting on base. It doesn’t matter how it happens, get on base.”

It is fun to talk about team chemistry and family but ultimately, at App State, you are expected to win games and you do that with your performance on the field. One of the biggest issues with the team last year, expressed in the quote above, was the team’s inability to get runners on base. When you are unable to consistently get runners on base, you cannot score, which in turn severely limits your chances of winning.

The 2017 team posted an abysmal batting average of .224 and on-base percentage of only .301, clear indicators to why they won only 14 games on the year. This is the reason Hoerner has stressed the concept of getting on base. When you get on base, you can extend innings, increase pitch counts and give your team more opportunities to score runs and win games. Hoerner and her coaching staff are not concerned about home runs or how you get on base, whether it be via a hit, a walk or hit by a pitch. When you get on base, your odds of winning the game go up tremendously.

The 2018 Mountaineers’ softball team expects to win games and bring some respect to the program. With the leadership of Hoerner, a strong veteran presence and the influx of youth the team has all the tools to make this an attainable goal. Only time will tell whether the program can get back on the path to success or if it will continue to struggle like recent years. Either way, 2018 will be an important stage in the development of App State softball and should be a fun story to follow throughout the season.