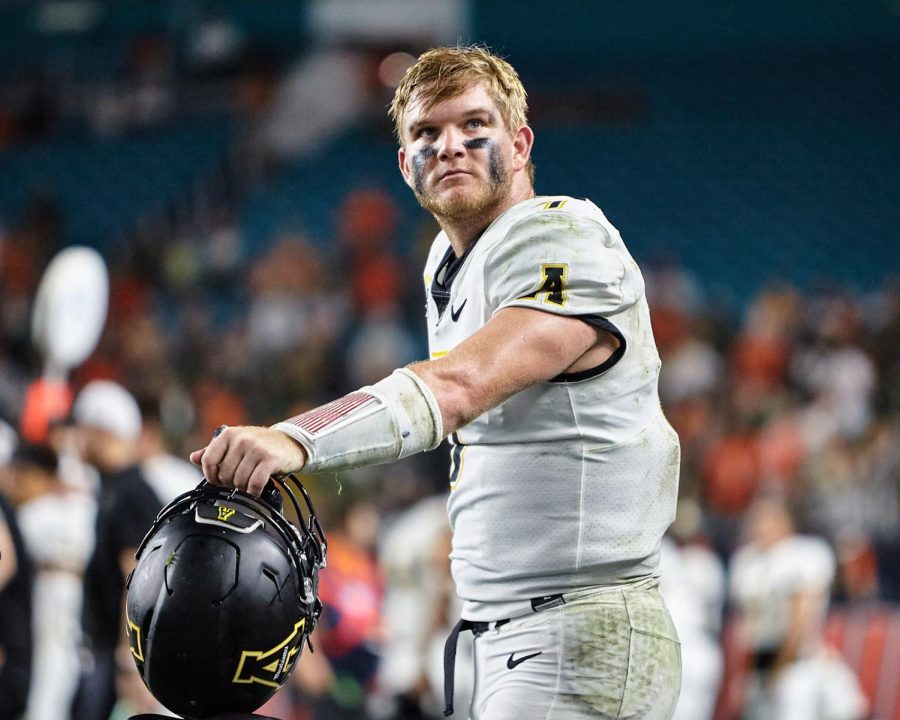 Quarterback Chase Brice looks to the stands during App State’s Sept. 11 matchup against No. 22 Miami. The Mountaineers took the Hurricanes down to the wire, falling 25-23 after Miami drilled a 43-yard go-ahead field goal with two minutes to play.

One App State football newcomer’s  journey through the college football landscape has been anything but conventional. Graduate transfer quarterback Chase Brice started his career with Clemson, where he served as a backup from 2017-19 before transferring to Duke. As a starter for the Blue Devils last season, Brice threw 15 interceptions, the most of any quarterback in the country, while recording a meager 2-9 record.

“He didn’t have the season he wanted last year,” head coach Shawn Clark said. “When he got here, you could tell he was very comfortable with the system we have.”

After App State’s 2020 season, the Mountaineers were without starting quarterback Zac Thomas and backup Jacob Huesman. To fill this hole, Clark began the search for his next quarterback, and Brice ended up being just what he was looking for.

“We recruited about 15 quarterbacks and decided Chase was our guy,” Clark said. “When he got here, he hit the ground running. He wanted to be the guy that took us to the next level.”

Another reason for the quarterback search was App State’s head coaching situation. Clark is the third Mountaineer head coach in the last four seasons, which turned away recruits at the quarterback position. The transfer portal became a saving grace for the team to find the right player and fill that gap.

Super senior wide receiver Corey Sutton sat out last season to recover from an injury, allowing him to help recruit Brice. As soon as Sutton knew Brice was coming to App State, he was already making sure the transition was smooth.

“When I found out he was coming, we talked on FaceTime before he came up here, just telling him what to expect,” Sutton said. “He’s going to be a one-year quarterback, but we have to be meshed like we’ve been playing for years.”

Brice was thrown into a program with a rich history at the quarterback position, dating back to Armanti Edwards and the three-peat national championship teams from 2005-07. In order to continue that success, Brice and his teammates needed to bring the right mindset to the team.

“A lot of it is guys buying into the program, a winning program, winning mindset, the culture and executing the game plan,” Brice said. “App had an ‘off year’ at 9-3. In most cases, that’s a great season for other teams, but for them, they were not happy.”

One key factor in Brice settling in with his new team was the return of Jacob Huesman. After leaving the team and working a job away from football, Huesman decided to use his extra year of eligibility and return to the team in the summer a few months after Brice joined. Huesman played a key role as a backup for Thomas over the last three seasons, and now he could provide Brice with the same help.

“We make each other better,” Brice said. “He’s definitely pushed me and really helped me see the offense in a different way.”

With so many returning players, building chemistry was no small feat. Most of the team has played together for multiple seasons and already has chemistry built. Bringing in a new player, especially a quarterback, can be tough, but the team welcomed Brice with open arms.

Once he meshed with the team, learning a new system was the next hurdle to overcome. Offensive coordinator and quarterbacks coach Frank Ponce worked with the previous two starting quarterbacks at App State, so Brice was in good hands. Brice spent a lot of time watching how former quarterbacks Thomas and Taylor Lamb ran an offense in the past.

Brice didn’t just pay attention to what Lamb and Thomas did on the field, but what they did off it. Every week before a game, Brice treats his offensive line to a meal, a tradition he kept up from the Lamb and Thomas eras to show appreciation for the work they put in to protect him.

“We get a good hour, hour fifteen of just bonding time and fellowship,” Brice said. “We don’t really talk about football. That’s something we leave at the door and just see how everyone’s doing. We check in on each other’s NIL deals. It’s been good.”

In his first games as a Mountaineer, Brice showed how all of the work he put in over the offseason paid off. Through five games, Brice accounts for 1,360 passing yards and eight touchdowns for an average of 272 yards per game. After his first game against East Carolina, he noted how it was nice to have fun playing football again after an unorthodox season last year.

“Mentally and physically, I’m in a better state of mind,” Brice said. “Just appreciating where I’m at, how far I’ve made it and just keep building each week. Still got a lot to improve on, but I’m getting better.”