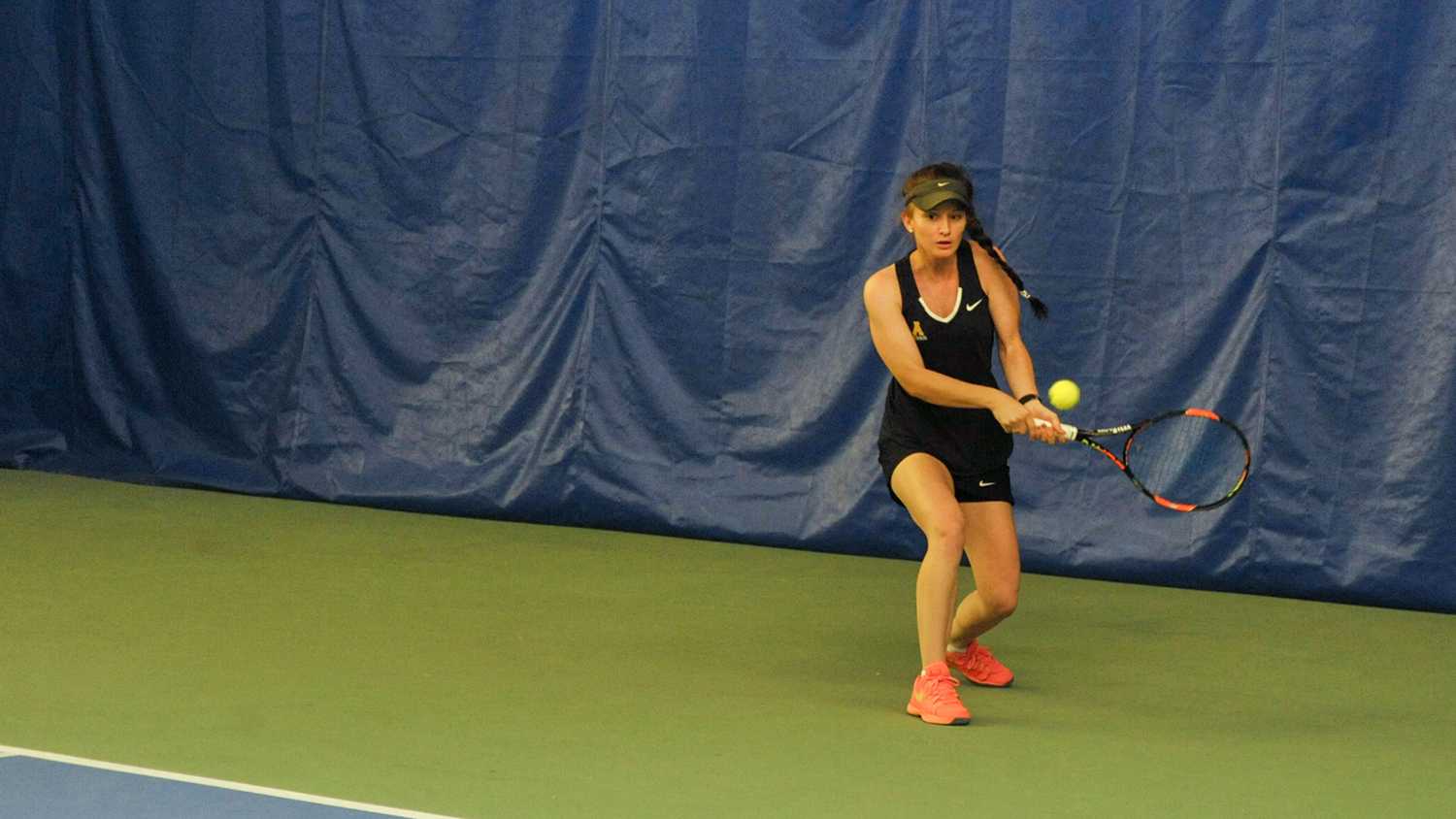 App State women’s tennis has a new look heading into the 2016 season. With four new freshmen coming and no graduating seniors from last year, the Mountaineers are facing a season of some inexperience.

This year’s team has three seniors, captains Clare Cox and Mackenzie LaSure who were last year’s captains as juniors, and Brianna Armellino. All three are experiencing their second season in a row as the oldest players on team with no seniors in 2015.

“It is similar because we were still captains last year, but this team is a lot bigger,” LaSure said. “The younger girls need a lot of leadership and it is really important to be together and rely on each other.”

After a 0-2 start, the team is hoping the freshmen are gaining some confidence with much of the season to play. Redshirt freshman Taylor Bygrave, who sat out last season with an injury, won her first career match against College of Charleston two weeks ago.

“It was exciting,” Bygrave said. “Being my first win ever in college, I was super excited.”

Bygrave, from Australia, has been making the most of her experience at Appalachian State.

“We didn’t have tennis in high school in Australia,” Bygrave said. “Coming here is an exciting new opportunity.”

Freshman Heidi Swope has showed her teammates she will be a difficult opponent in the future. Swope put up a tough fight against No. 4 UNC, falling 3-6, 5-7 in the Mountaineers first match, and pairing up with senior captain Cox in a long doubles match against College of Charleston.

“Pairing up with Heidi hopefully helped build up her confidence,” Cox said. “That is what she needs as a freshman – to build confidence in winning. It is hard as a freshman to experience winning and hopefully the tight match helped her out.”

Cox and Swope’s double match was not the first senior-freshman duo that head coach Colin Crothers has paired up this season. LaSure and freshman Remi Andre paired up in the team’s first match against UNC.

“I just try to tell the freshmen to remember why they are here and to stay focused,” LaSure said. “They have to realize they worked hard to get to this level and everyday is a new opportunity.”

Crothers spoke about how in junior tennis, doubles are not played as much so this is a new experience for most of the freshmen.

“The experience from the seniors hopefully teaches the freshmen,” Crothers said. “We have a good set up of freshmen and upperclassmen.”

Adjusting to college life is difficult for anyone, especially so when playing a Division I sport, but with four freshmen on the team the adjustment has been a bit smoother.

“Other girls are going in the same situation as you,” Swope said. “There were some girls who came in this spring who had a harder time transitioning but having the girls in the same position as you really helps.”

While freshmen like Swope and Bygrave have competed this winter already, Crothers is aware that it’s going to be hard to get everyone playing time with such a large team.

“We have a young team and a very big team,” Crothers said. “It’s going to be hard to get playing time but I try to make it fair and have as many challenge matches as I can. The freshmen have been stepping up.”

With all the new faces on the team, the seniors realize this year is more about building for the future.

“There are a lot of new people on the team and it is hard to balance with different dynamics,” Cox said. “Normally it doesn’t get better until the middle of the season but it has been tough trying to adjust some.”

On the coaching side, this isn’t Crothers’ first rodeo and his expectations are high for the team.

“This is my 18th year, so I have seen everything,” Crothers said. “I’ve been in this situation and hopefully the expectation is they will learn from others.”

With Cox and LaSure helping pave the way for the Mountaineers’ new players, the future looks bright for the team if everyone stays focused.

“They just need to have a good attitude and stay positive, no girl drama,” Cox said.

Teaching the freshmen will not be the seniors’ only focus this season. They’ll also be looking to end their Mountaineer career on a strong note.

“Everything is my last. Each time I play a certain team it is my last and it drives you more,” LaSure said. “It makes you more focused and committed because the reality of it being your last time makes you want to go out with a bang and a winning season.”

The Mountaineers have a lot to focus on this season, from helping the freshmen to winning their conference, but as long they stay focused it should be a very intriguing season.