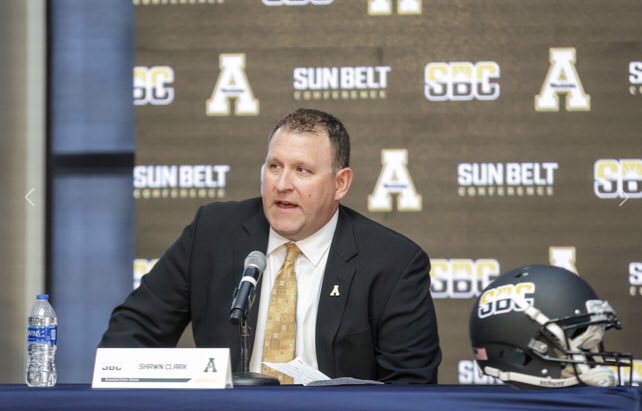 App State football head coach Shawn Clark had to battle through a new world in a pandemic in his first season. The Mountaineers struggled at times in big games, especially against conference co-champions Coastal Carolina and Louisiana. During those tough losses, Clark was able to learn from mistakes and grow with his team. In 2021, App State returns 17 of their 22 starters, a multitude of them earning preseason honors.

After a tumultuous year, the Mountaineers have reloaded their roster, bringing in the second-highest ranked recruiting class in the Sun Belt, according to 247Sports. App State was voted co-favorites to win the East Division in 2021, tied with the Chanticleers with 44 points in the polls. Coastal Carolina was the darling of college football in 2020, but the voting favors the Mountaineers to potentially retake control of the Sun Belt.

Super senior wide receiver Thomas Hennigan, senior running back Daetrich Harrington and junior linebacker Brendan Harrington all earned second-team honors as well. Hodges and Hunter have been a large part of an offensive line that has commanded the Sun Belt in the last three years with running backs like Peoples and Harrington, who was leading the Sun Belt in rushing yards before a season-ending injury, running behind them. The Mountaineers were second in the Sun Belt in rushing yards in 2020, only behind Georgia Southern, who runs an exclusively rushing offense. Peoples earned honors on July 19, being named to the Maxwell Award Watch List, which is awarded to the best offensive player in college football.

The five defensive selections also showed out in 2020, helping App State lead the conference in scoring defense, allowing just 20 points per game. Taylor and Jolly were both selected to the Bednarik Award Watch List, awarded to the best defensive players in college football.

The only surprise from the Sun Belt polls was the absence of super senior wide receiver Corey Sutton, who earned preseason first-team honors in 2020 before deciding to opt-out to continue his knee rehabilitation. Sutton returns fully healthy for 2021 and the Mountaineers continue to show everyone how successful he’s been after the voting snub.

The Mountaineers begin their season on Sep. 2 in the Duke’s Mayo Classic vs. East Carolina at Bank of America Stadium.