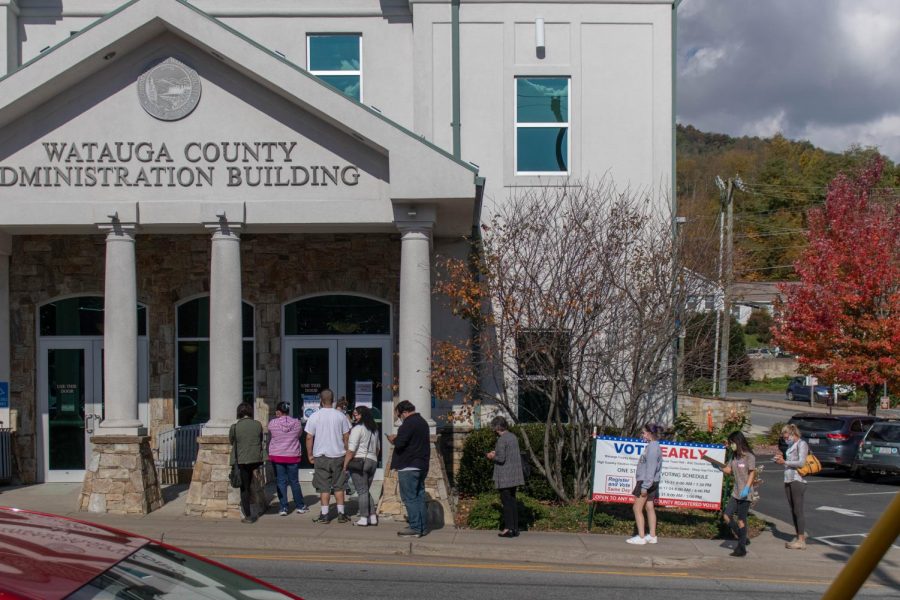 Community members wait outside the Watauga County Administration Building on the first day of early voting, October 15, to submit their ballot in the 2020 presidential election.

North Carolina voters showed up in force for the first day of early voting Thursday.

“The state board is glad to see North Carolina voters taking advantage of the different options to cast a ballot,” said Karen Brinson Bell, executive director of the State Board of Elections in a press release. “The county boards of elections and election workers worked diligently to ensure a successful first day of early voting. We thank them for their heroic efforts.”

Watauga County saw 2,863 voters head to the polls Thursday. The 2016 election saw a total of 32,241 people vote in Watauga County.

Director of Elections Matt Snyder said turnout — especially at rural sites — was the story of the day.

Jeff Cathey, who oversees operations in the student union, said he thought the campus site ran smoothly throughout the day and isn’t aware of any problems.

App State has a mask mandate indoors, but Cathey said the Blue Ridge Ballroom is pretty much handed over to the board of elections for the duration of voting.

“It’s just been made very clear that App State encourages face coverings at all times,” Cathey said. “We’ve basically given the Blue Ridge ballroom to the board of elections, even for the sake of security and things. Even locks are changed.”

Choosing to not wear a mask cannot be a barrier to someone voting, according to guidance from the state board. Because of this, Cathey said, poll workers are not enforcing face coverings.

However, the state board encourages voters to wear masks and voting sites have free masks available for voters.

Annabelle Jones, a senior sustainable development major, said poll workers told her she was the first App State student to vote at the campus voting site. Jones got to the site at 7 a.m. — an hour before polls opened.

“Honestly, being the first student to vote on campus was incredible and something I will never forget, but I’m most blown away with the App State professors who had been waiting in line way before I even got there,” Jones said.

Jones said she was the fourth voter at the union site. Three App State professors voted before her, she said.

“I’ve been interning with the North Carolina Democratic Party for the last two months, and voting felt like a huge weight was lifted off me,” Jones said. “I truly believe that North Carolina is fired up and that we’re going to see history be made.”

Cathey said he recommends voters utilize the student union during one of its slower periods. He said that there tends to be little to no line early and late in the day.