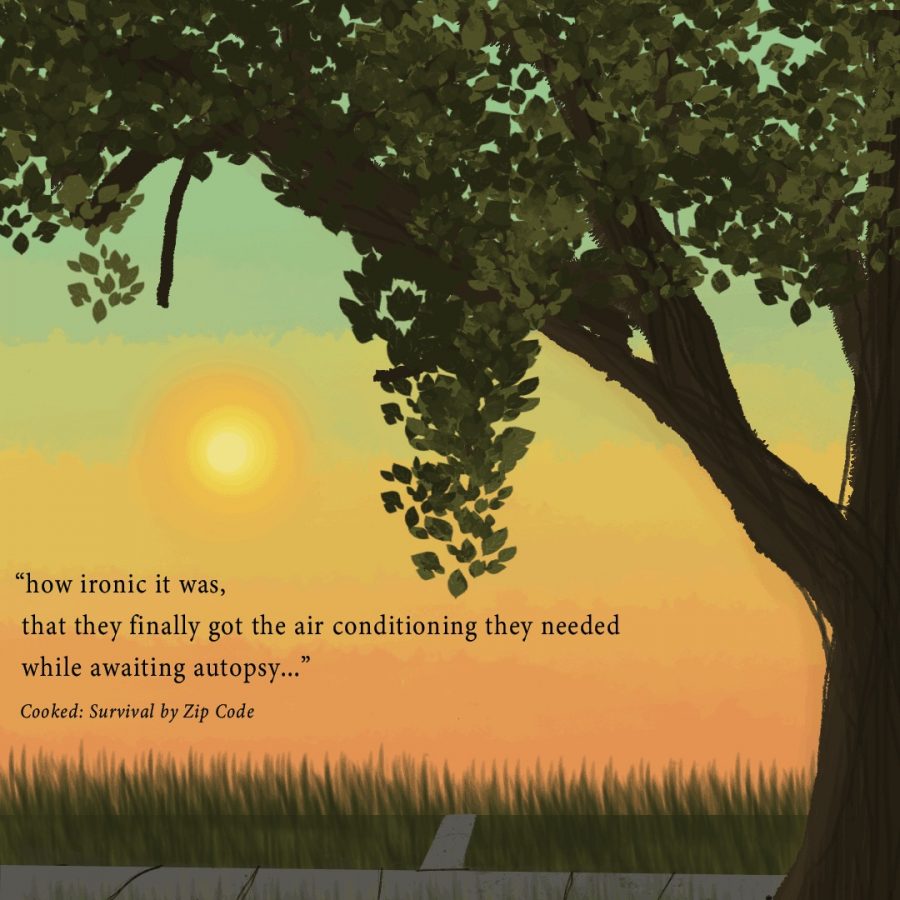 The Office of Sustainability has partnered with Working Films to show a Fall Film Series, Revisioning Recovery. This graphic represents an interpretation of a scene from the first film in the series, "Cooked: Survival by Zip code.”

This fall, the Office of Sustainability partnered with a national North Carolina-based nonprofit to stream the film series “Revisioning Recovery” via Zoom. The organization Working Films utilizes minidocumentaries to educate viewers about the connections between climate and social injustice.

“I just really hope students are empowered, and I hope students can take from these films inspiration from the people that have made a difference,” said Rebecca Walton, outreach coordinator for the Office of Sustainability.

The films in“Revisioning Recovery” discuss pollution, climate gentrification, environmental disparities between zip codes based on wealth and race as well as instances of discrimination in disaster response.

According to Working Films’ website, the documentaries further the initiatives for social justice and environmental protections.

The nonprofit also dedicates itself to providing a platform for underrepresented filmmakers. Hannah Hearn, impact coordinator for Working Films said, Working Films consciously connects with filmmakers who are people of color, members of the LGBTQ+ community, women and those who have disabilities.

“We believe in the power of storytelling to move the dial forward on the most pressing issues of our time,” said Hearn.

“What we’ve found with films is that it’s a way to tell people’s stories,” she said. “Facts and figures and data are incredibly important, and there’s the other side of the coin where it’s listening to people’s personal stories, listening to what people’s needs are, hearing it directly from them.”

Hearn said many viewers are inspired to form local coalitions, sign petitions and write to their congressional representatives to push for legislative change after watching the film series.

Walton says students can surround themselves with other change-driven individuals by joining clubs and taking part in volunteer opportunities cleaning campus and tending to the community gardens. Keeping App State’s campus green and learning about climate issues are just a few ways in which students can make a change in their local community.

Located on the first floor of Plemmons Student Union, Appalachian and the Community Together has opportunities for students to provide a helping hand across the state, country and world. These alternative service experiences take place in the fall, winter and spring.

Through films and hands-on activities, App State provides students with plenty of resources to keep campus, the community and the Blue Ridge Mountains clean, Walton said.

Students looking to take action locally can visit the Office of Sustainability’s website or visit their office located in East Hall.