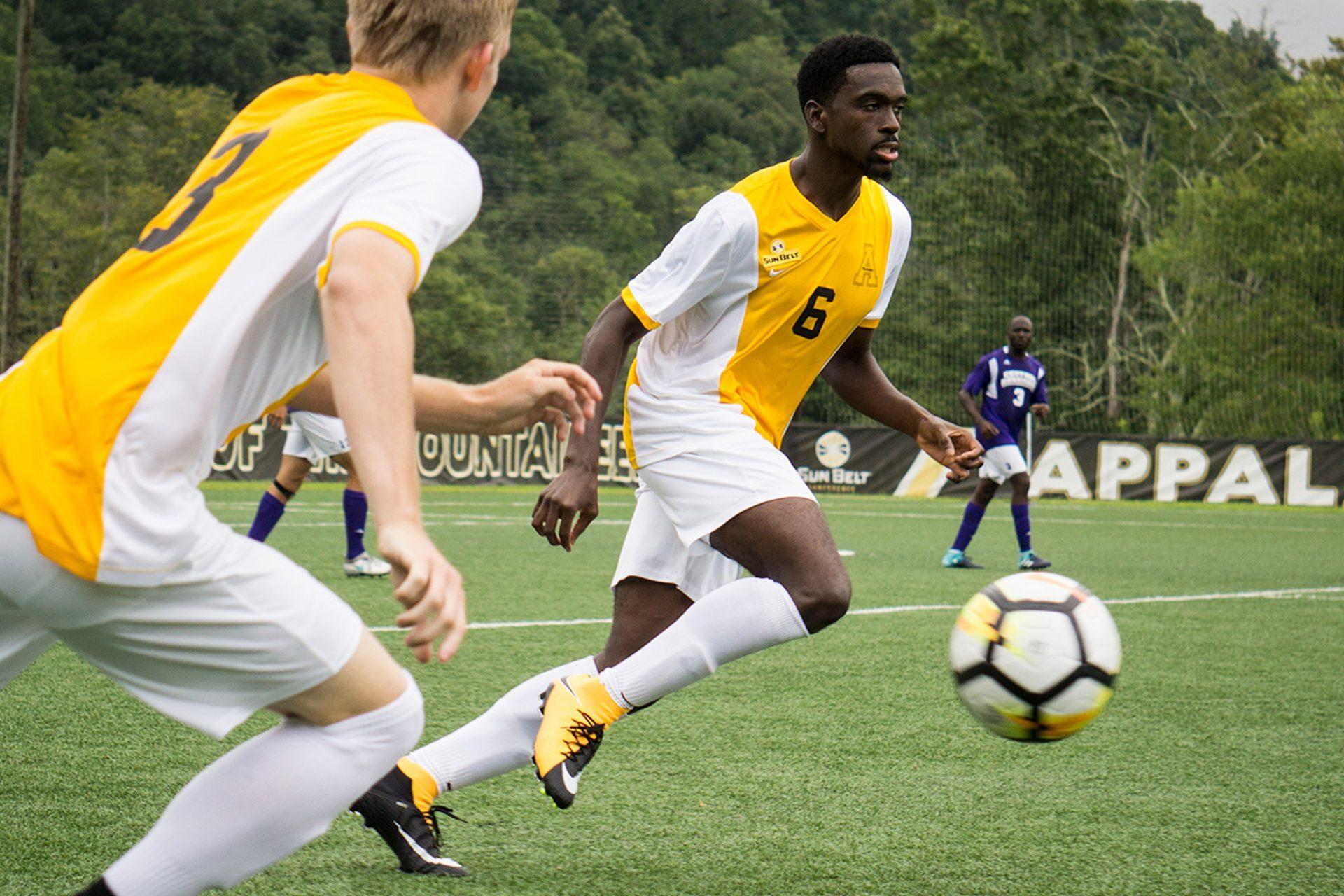 Midfielder Raheem Somersall brings the ball towards UCA's half. The team's clear communication during the game on September 1st helped the Mountaineers dominate the pitch.

The Appalachian men’s soccer team is looking forward to seeing junior midfielder Raheem Somersall’s improvement after his involvement with the USL-PDL, a development league that provided Somersall with the opportunity to play for his national team, St. Kitts.

The Mountaineers need Somersall to take a huge step his junior year with the addition of 12 freshmen. He will have to pick up his play and his coaches believe the sky’s the limit for him.

“Somersall has made tremendous strides since I got here,” assistant coach Daniel Louisignau said. “I am very excited to see what he has. I believe he has not even scratched the surface and he decides on how great he wants to be.”

Somersall credits his involvement with the Premier Development League for his improvement on the field.

“The intensity and pace is so much different in that league,” Somersall said. “If I can bring that over and put it to use on the field, my confidence will grow every game. The main thing the Premier League did for me was slow the game down. I see things happening now, I am using my mind more.”

Somersall was shocked with the talent level of the athletes in the Premier Development League.

“It was a different animal over there,” Somersall said. “Every game I played, you would sit back and always be amazed of a couple plays these players would make.”

Somersall said he could not believe how much he learned from the PDL and what he learned on the field were only half of it.

“Seeing the different cultures was amazing to me,” Somersall said. “It will be something I will not forget; some of the the things I learned off the field could even help me on the field.”

Teammates of Somersall have noticed an improvement in his game and they also credit the PDL for that.

“I have been playing with Somersall for almost five years and this has got to be the most improvement I have ever saw him,” junior defense Ian Bennett said. “I noticed the improvement when I saw him looking for his teammates instead of trying everything himself.”

Being a junior, Somersall knows his leadership role will improve and he plans on stepping up and leading the younger Mountaineers on and off the field.

“This is probably one of the youngest teams I have ever been on,” Somersall said. “It is crazy. I went from one of the young guys last year to one of the leaders this year, and I am ready for the challenge.”

Teammates have been impressed with the leadership that Somersall has been showing in the early part of the season.

“He is always willing to give anyone advice to help improve their game,” Bennett said. “You hear him always talking on the field, trying to get the rest of the team the spots they need to be in.”

Leadership is an important quality, but the Mountaineers will need Somersall to lead his team on the field by making plays for either himself or his teammates.

“We are going to need Somersall to take over some games this year,” Louisignau said. “Like I said before, the sky’s the limit for him, If he wants to be an all-Sun Belt player, he can do it, but the ball is in his corner.”

Somersall was quick to dismiss any individual goals he wanted to achieve and said he was all about the team.

“An all-Sun Belt team would be nice,” Somersall said. “What I want to do first is win and that is my only goal. My individual goals can come after what the team accomplishes first.”

Teammates are expecting Somersall to take an extra step from his sophomore year to his junior year.

“I can tell a difference in him this year, Raheem always seems to be in the right places,” Bennett said. “Not only is he using his natural skills, he is using things we find in game film and translating that into successful things onto the field.”

Everyone close to him believes this will be Somersall’s break-out year. He has the experience and different tools he picked up from the PDL.

“This is the most focused I have been in while,” Somersall said. “Everything I did this offseason should make me a better player and now I am just ready to show it on the field.”