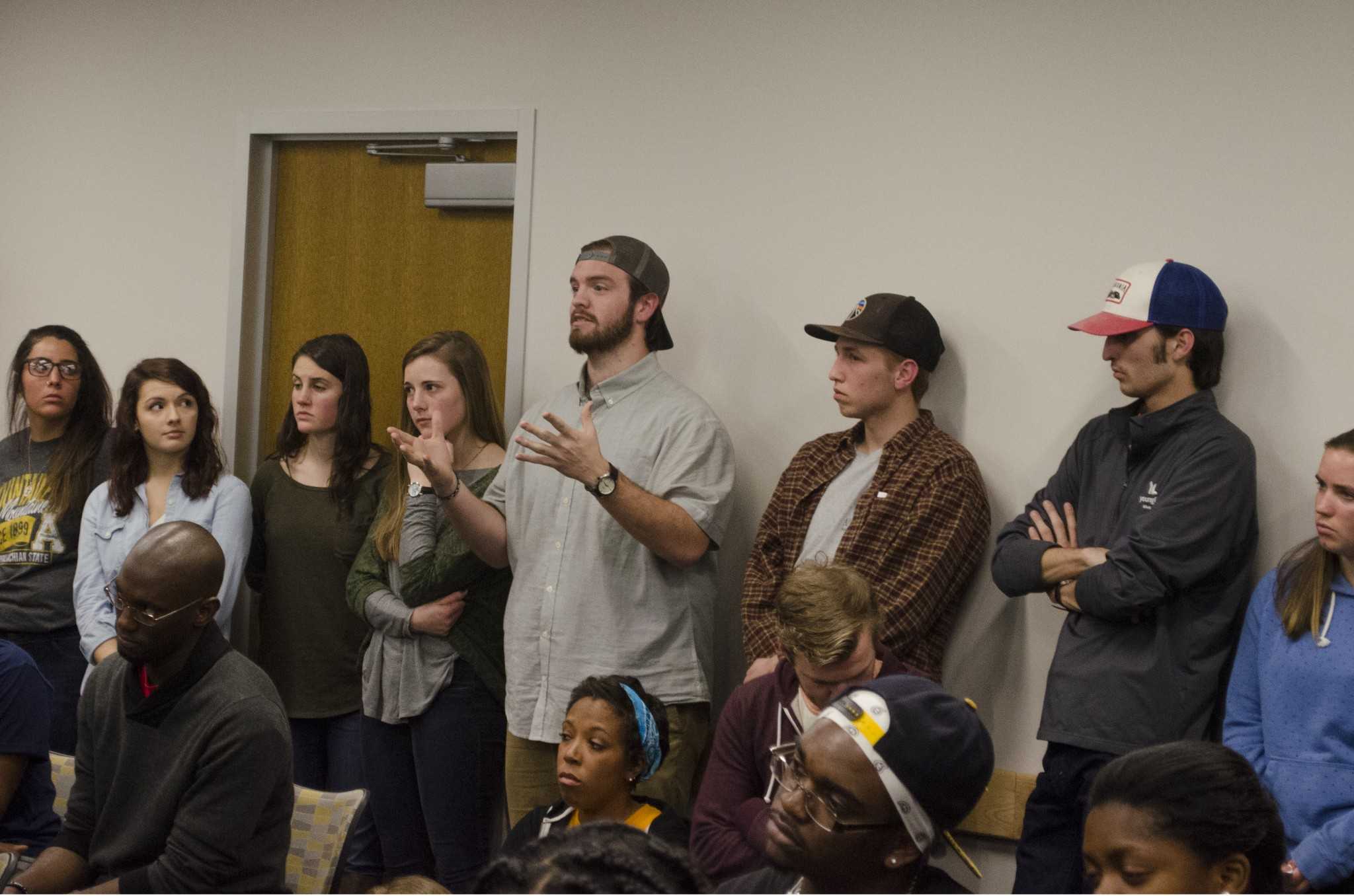 Brent Rayfield (center), the president of Appalachian’s Young Life College chapter, addresses the entire room during one the Dissecting the YL "Thug Life" Party open discussion. After the event, Rayfield said it was good to hear from students who felt offended by the Thug Life event and that he’s become more aware of these issues. | Photo: Michael Bragg, The Appalachian

An informal and crowded open discussion was held Monday in response to an on-campus event that many students at Appalachian State University found offensive and insensitive.

Last week, Appalachian’s Young Life College chapter, a Christian ministry organization, held a Thug Life themed event during one of its weekly meetings in Plemmons Student Union. Reggie Gravely, president of Appalachian’s National PanHellenic Council, was one of the first students to bring attention to the Young Life event and helped create and moderate the Dissecting the YL “Thug Life” Party discussion on Monday.

Photos on social media of the Thug Life event, many of which have been removed, showed students wearing apparel such as snapbacks, basketball jerseys and baggy clothes while throwing up hand signs. One geotag read “the hood” and some posts had #ThugLyfe in the description.

The discussion Monday night took place in the Three Top Mountain Room of the student union and was filled with an overwhelming number of students, who were all from multicultural student organizations, students interested in what had happened and members and representatives from Young Life at Appalachian and the High Country. By the time the event began, attendees had filled the chairs, lined the walls in rows and sat in the remaining floor space.

August Short, the area director for High Country Young Life, was present and spoke most frequently for the organization. He took the time to comment and answer any questions while apologizing several times on behalf of the organization.

“Please hear that I am very sorry and we did not intend to have anything offensive,” he said. “That was my fault, we were wrong and I am not going to sit here and defend what we did. We were wrong, and I’m here and the leaders are here to learn how to make it better and how to move on from this. So I apologize sincerely.”

During the different sections of the 90-minute discussion, which addressed the concerns of the themed event, suggestions and plans of actions, a large majority of the comments and questions from all participants were thoughtful and non-accusatory, but still addressed the controversy of the Young Life event directly.

“I tried to set up the space where it wouldn’t be constantly attacking them because we do understand that the intent was not to harm people, so I really tried to foster that space and if anything got disrespectful, tried to move along the conversation,” said Gravely, a senior international and comparative politics and psychology major, after the event. “But I tried to make them feel as safe as possible so they would be more willing to share their viewpoints on it.”

Among the comments made, all students voiced their concerns and explanations as to why an event by a student organization at Appalachian with a Thug Life theme is insensitive and offensive to minority students. The issue of cultural appropriation was also brought up.

“The thing that I wanted to pinpoint most about cultural appropriation is that when you are putting on these costumes, when you are putting on these roles, you’re neglecting the fact that because of the common issues that have been going on, young men have been getting murdered,” said Mariah Webber, a senior psychology major and one of the moderators of the event. “People have been getting killed, shot in the streets because people assume that stereotype about them.”

Other forms of input from the attendees included advice and suggestions for future events of any student organization to avoid making the same mistake, as well as possible diversity training initiatives. There were also suggestions that members of Young Life attend different minority and social justice student organization meetings, such as that of the Black Student Association and Appalachian Social Justice Educators, which Short said he plans to attend.

Only a few members of High Country Young Life and the chapter at Appalachian volunteered to speak. And of those attendees, only a few had a chance, as well as all others who came, due to the volume of people in the room and the allotted time.

In his closing remarks, Gravely said he plans to keep an eye on Young Life as they move forward from last week’s event and from the discussion, but that he holds no ill will toward the members of the organization based on one event.

Brent Rayfield, a senior recreation management major and president of Young Life College at Appalachian, said after the discussion that he apologizes for last week’s event and he sees the purpose of Monday’s discussion was to become not only more aware of these issues, but to become an advocate and ally as well.

“I think none of this becomes significant until we start moving forward and we decide to be a part of this,” he said. “I think overall it was a great meeting. It was great to hear a lot of voices from the whole campus and to understand viewpoints that we haven’t necessarily heard before.”

Joshua Carr, a senior psychology major and secretary for NPHC, said the discussions did stray off topic to, at times, broader issues of race at Appalachian, such as recruiting more racially diverse students to campus and the retention of those students.

“Overall, I was very pleased with the event,” he said. “I think that we kind of did lose sight of the specific event, but I think it’s very difficult to talk about an issue like this without talking about the entire scope of it as well.”