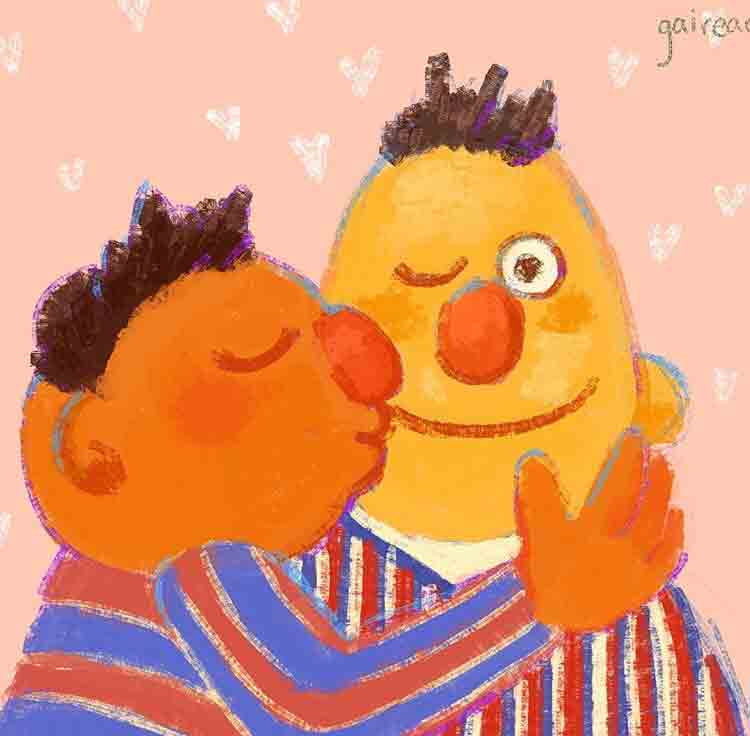 "I love your love" by Gaireach.

Mark Saltzman, a former writer for “Sesame Street,” said when he wrote Bert and Ernie he felt the two were in a gay relationship similar to his own relationship with his longtime partner, Arnold Glassman.

Many saw the two as a positive early representation of a gay relationship.

“I always felt that without a huge agenda, when I was writing Bert and Ernie, they were. I didn’t have any other way to contextualize them. The other thing was, more than one person referred to Arnie and I as ‘Bert and Ernie,’” Saltzman said in an interview with David Reddish.

Sesame Workshop denied his claim, tweeting: “Even though they are identified as male characters and possess many human traits and characteristics (as most ‘Sesame Street’ Muppets do), they remain puppets, and do not have a sexual orientation.”

This disagreement about Bert and Ernie’s sexual orientation raises questions about if they were early representatives of the LGBTQ community.

“I was a little shocked by (Sesame Workshop’s Tweet), just because I think they are somewhat iconic characters and everybody’s made jokes about them for so long,” Jake Reeves, a graduate student studying Student Affairs Administration and graduate assistant for the Henderson Springs LGBT Center, said.

Reeves supervises a staff of about 20 volunteers who help students start programs related to LGBT identities and offer information to potential members. Volunteers also provide support for students who need coaching or any type of assistance.

Reeves said he thinks Sesame Workshop should have said something along the lines of “we are accepting of all forms of love, whatever that might look like,” instead of immediately dismissing Saltzman’s statement.

This controversy is reflective of the past. Reeves said during the ’80s, when “Sesame Street” was popular, a lot of people may not have been openly identified, but did identify within the LGBTQ community.

“I already had my life partner, the love of my life. We weren’t living together. All our friends knew, but I don’t think I was professionally out,” Saltzman said.

The parallels between Saltzman and Glassman’s relationship and Bert and Ernie’s was recognizable before Saltzman was open about being gay.

Sesame Workshop could have handled this better. As a show known for educating a young audience about acceptance, this would have been its chance to make an official statement to those who thought Bert and Ernie were gay all along.

“Sesame Street” includes a multitude of ways to address topics like race, family problems and mental illness, so to dismiss the inclusion of the LGBTQ community is an unfortunate decision.