New York Rep. Alexandria Ocasio-Cortez drew conservative ire on Jan. 6 when she suggested a 70 percent marginal tax on people with income over $10 million in an interview with “60 Minutes.”

Angela Morabito, a writer for the National Examiner, wrote that this plan was “worse than actual socialist countries.”

“She wants people taxed as high as 89, 90 percent if you make $10 million or more, where she calls them the tippy top,” Fox & Friends co-host Brian Kilmeade said on-air.

Among opponents of this idea, there seems to be the idea that Ocasio-Cortez’s plan would apply the 70 percent tax to the entirety of a millionaire’s income. This is emblematic of a seemingly widespread misunderstanding of taxation.

What Ocasio-Cortez suggests is a marginal tax rate, which is different than a flat tax. The 70 percent marginal tax would apply only to any dollar made over $10 million.

This is how the U.S. tax system works. Depending on how high your income is, you’ll be placed into a bracket that determines how much you’ll be taxed. Your bracket is determined not only by how much money you make, but also for what status you file under. There’s single, married filing jointly, and head of household.

This doesn’t mean you’re paying the tax rate for that bracket on your whole income, just for income falling into that bracket. 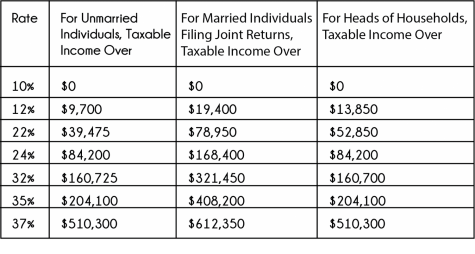 This puts your effective income tax rate at around 13 percent. Now, you will also have to pay state income tax and payroll tax, which includes Social Security and Medicare. Overall, Your tax burden would be somewhere between 25 to 30 percent of your income.

In 2017, the Tax Foundation found that the average American family’s total tax burden was 31.7 percent of their pretax earnings. In contrast, Warren Buffett, one of the richest men in the U.S., reported that his 2010 income tax bill was only 17.4 percent of his taxable income in a New York Times Op-Ed.

Buffett attributes this to a myriad of tax breaks and loopholes instituted by the federal government. This wasn’t always the case, with top-earners once paying 90 percent on the top part of their income, but ever since Reagan took power and signed in the Tax Reform Bill of 1986, the federal government has focused on “protecting” the ultra-wealthy.

In 2017, the Spectrum Group found that less than 10 percent of American households make more than $1 million each year.

Researchers Emmanuel Saez and Gabriel Zucman found that the top .01 percent of American families make almost as much money as the bottom 90 percent. One hundred and sixty thousand families have the same amount of wealth as 144.6 million families.

Wealth inequality in the U.S. is obscene. No one needs that amount of money, and the fact that they pay a lower effective tax rate is even worse. A cup of water means nothing to a man with a well, but everything to a man in the desert.

Multi-millionaires shouldn’t be carrying a lighter load than the average American. What Ocasio-Cortez suggests isn’t insanity, but a return to reason for the U.S.