You know that meme that says, “I don’t want to live on this planet anymore?”

Reality TV today seems to be more of an oxymoron than anything else. There is no reality in television. There is only stupidity.

From game shows to dating shows, from “Real World” to “Real Housewives,” from “Jersey Shore” to HoneyBooBoo, we watch the downfall of society on our own TVs.

If I was teaching a classroom of foreign exchange students and they asked me to explain the term “the ugly American” I would point them to any reality show.

The real kicker, however is that HoneyBooBoo and her family make at least $2,000 to $4,000 per episode, according to The Hollywood Reporter. If the show is picked up for a second season, their salary will only increase. 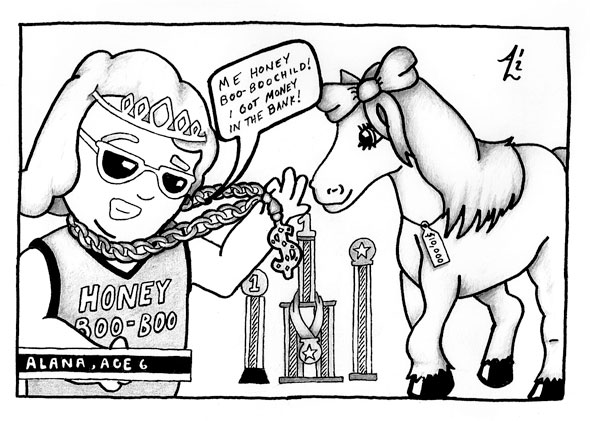 These people are getting paid outrageous amounts of money and being watched more enthusiastically than the possible fate of our nation for what? Crazy family antics? Being stupid? If that’s the case, then I know plenty of people who should have their own “reality shows.”

Of course, you can never know what is staged and what isn’t anymore, but let’s face it – no family acts like Alana Thompson’s all day every day.

It’s just scary to me that these individuals are chosen to represent us as Americans on television and actually get paid an actor’s salary to do it.

Actors are talented. Reality show stars are parodies of our culture. And they’re terrible at reading the lines they’ve been assigned. If you’ve ever listened to what reality show stars are saying, their intonation and diction, you’d notice how fake and similar it all is.

What scares me even more is the future. “Jersey Shore” already seems to have hit rock bottom. So what could be next?

What outrageous idea of reality is going to haunt my screen tomorrow?

Newkirk, an English major from Wilmington, is an opinion writer.