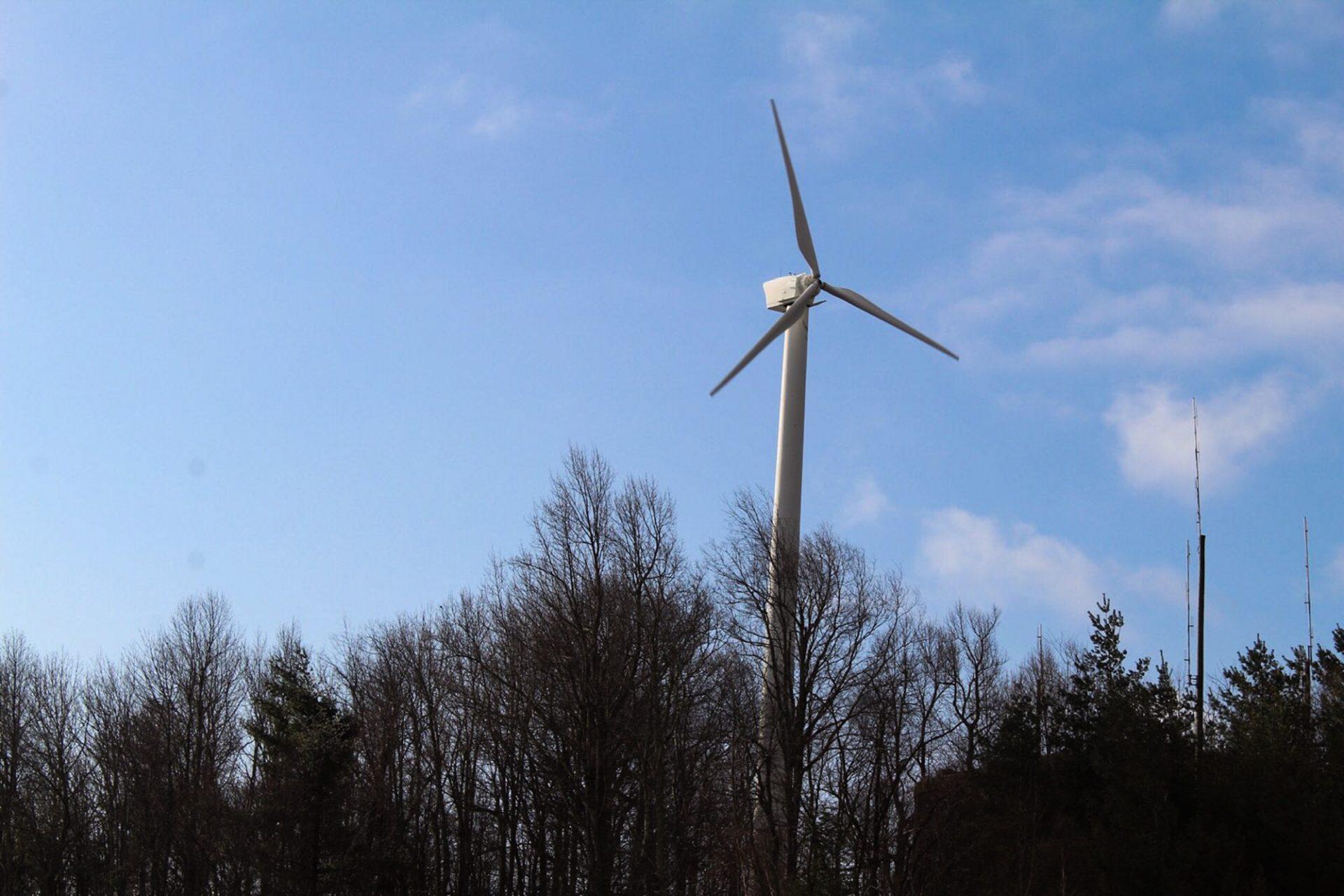 The Broyhill wind turbine at Appalachian State was installed in June 2009. It stands at the highest point on campus at 755 Bodenheimer Road. The turbine allows Appalachian State to generate energy while off-setting 200 metric tons of carbon dioxide per a year.

A symbol of Appalachian State University’s commitment to sustainability, the Broyhill Wind Turbine, is a testament to the ability of App State students to change the world.

The 152-foot-tall turbine sits at the highest point of campus and, until recently, was the largest turbine in North Carolina, according to the Office of Sustainability.

The 100 kilowatt-hour turbine was installed by the university in 2009, and ever since it has produced an average of 110,000 kilowatt-hours per year, which is enough to power 11 American households, according to the wind turbine system data.

Data from the turbine can be found in real time on the Office of Sustainability’s website.

The turbine was installed as a result of a partnership between the Appalachian State University Renewable Energy Initiative and the New River Light & Power Company.

A direct grid tied into the Northern Power Systems, all of the electricity that is produced by the turbine is used to offset the university’s power needs.

Jim Dees, the data and assessment specialist for the Office of Sustainability, said that most of the power generated by the turbine is used by the Chancellor’s house or Appalachian Heights due to the way the grid is wired.

“I don’t want you to get the impression that it was built to supply the Chancellor’s house,” Dees said. “It had nothing to do with the placement of it, that’s the only place that we could put it.”

The Broyhill Wind Turbine is not the first turbine to have been installed in Boone. From 1979 to 1983, the NASA Mod-1 sat on top of Howard’s knob, having been installed in a joint effort between NASA and the U.S. Department of Energy, according to NASA’s generator analysis.

Brent Summerville, a professor of Sustainable Technology and the Built Environment at Appalachian State was a member of the REI committee that first sought to bring the turbine to campus back when he was in graduate school.

Summerville said that the turbine has improved attitudes toward wind energy by showing that it can be successful.

“It’s a shining example of the students’ will to produce clean energy on campus,” Summerville said. “I think that it’s a signal that they want more clean energy, bigger projects, bigger pv projects and more wind if possible.”

The REI is entirely student run, so the fact that they managed to raise all of the money, find the proper spot to place the turbine and implement the plan alongside the NRLP, is amazing.

The turbine is a symbol of the ability of students to change the world and make it a more sustainable place.

And that is what is important. In the face of that, it does not matter that the turbine does not produce all that much energy for how much it cost.

The Broyhill Wind Turbine’s value cannot be derived purely from how much energy it contributes to the university. Its value comes from all of the different ways that it benefits the students of App State.

For sustainable technology it serves as a way for them to learn how to gather and interpret environmental data in real-world conditions, and for other students it serves as a point of pride that their university is dedicated to finding alternative energy sources.

Students can look to the turbine and know that the wind turbine is the most visible of all of the different sustainable technology initiatives.

Alongside all of the other projects that the REI has completed, including the solar vehicle, the solar picnic tables and the solar panels that have been installed all over campus, the turbine shows the community that App State is committed to finding new, sustainable ways of operating.

Currently the turbine has been operating for nearly 10 years, and here is hoping that it will operate for many more.

Q Russell is a junior journalism major from Charlotte, North Carolina. You can follow him on Twitter at @Q_M_Russell

Featured image caption: The Broyhill wind turbine at Appalachian State was installed in June 2009. It stands at the highest point on campus at 755 Bodenheimer Road. The turbine allows Appalachian State to generate energy while off-setting 200 metric tons of carbon dioxide per a year.