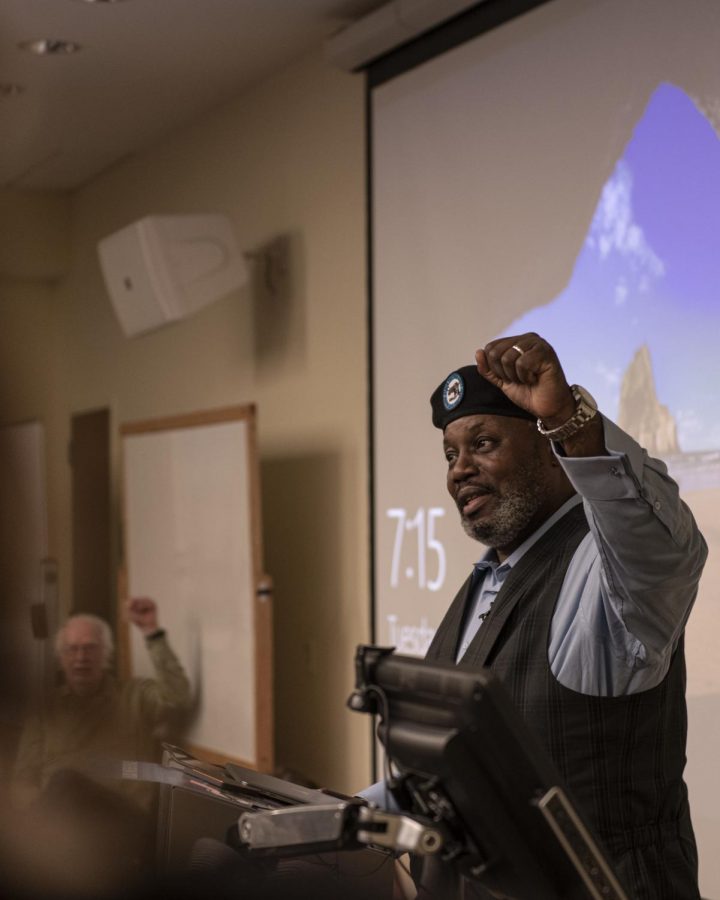 "Power to the people!" is the phrase Rev. Dr. Bradford Lilley exclaimed to the packed lecture hall full of students during his visit to App State.

With his fist high up in the air and passionate chants of “Power to the people!” from the crowd, Bradford Lilley took the stage.

Lilley was one of the original members of the Winston-Salem Black Panther Party, whose original intent was to patrol African American neighborhoods and protect residents from police brutality.

Lilley said he remembers living in Hertford when the NAACP came into his hometown. He said they spoke about nonviolent methods to integrate schools.

“In the latter part of the sixties, black people were fighting for integration, to be recognized as full citizens in this country, and my mother was a part of that struggle even in the deep South,” Lilley said.

Lilley said on one occasion, the NAACP was planning a demonstration, and the black community came together in one country church.

The NAACP told community members that children had to stay in the church. Lilley said everyone knew that if something happened to their kids, “all hell would break loose.”

”They loaded up and went downtown. The clan knew they were coming…everybody knew. That night, the clan didn’t go to the demonstration. They came to the church, and they shot up the church,” Lilley said.

Bullets flying into the air, Lilley found himself lying on the floor of the church, hiding behind a pew, hoping that he wouldn’t get shot.

“That was my introduction to the civil rights movement,” Lilley said.

The summer of 1968, 16-year-old Lilley found himself in New Jersey with his brother and friends.

When his brother found out the Black Panthers were in Atlantic City they took a bus there.

“My life changed when I met some real bad brothers and sisters. They talked about the struggle and how they needed to be involved and take up arms and fight for their rights,” Lilley said.

Lilley said they were given books and posters. Throughout the summer they paid the Black Panther Party more visits and when it was over, Lilley was back to his segregated suburban town in Hertford.

Lilley said he reacted to the speaker with, “Right on!”

The man on the screen was Eldridge Cleaver, the Black Panther Party’s minister of information.

Lilley said his father’s first words were “I know that man, I’ve seen him somewhere.”  That same man was plastered along Lilley’s bedroom walls.

”He went into the bedroom, he tore every poster off the wall..but he didn’t stop there. He took every book I had about black power, black awareness, black anything. He took all my literature. Took it all the backyard, put it in a barrel and set it on fire,” Lilley said.

In 1969, Lilley was headed to Fayetteville State University. He was excited to leave home and not live under his father’s roof.

As he walked onto campus he found himself still having a thirst for knowledge. He wanted to learn about the struggle, and be involved with brothers and sisters that knew “all about this black power thing.” Unfortunately, he faced the reality that the campus he was on wasn’t going to provide that for him.

Lilley said as they were driving into the outskirts of town, there was a billboard high up in the air that showed an image of a Klansmen riding a white horse and the caption read “welcome to klan country.”

As they were leaving, “wait a minute” tumbled out of his mouth. Lilley packed his bags, got in the car, and followed the two brothers home.

Lilley said he thought they’d put a gun in his hand and send him out into the streets to raise hell and become a revolutionary.

Lilley said nights were spent studying and in the morning they’d get up, feed the children before going off to school, and hit the streets selling newspapers to help the party put other programs in place.

He said the Black Panther Party started a free breakfast program in High Point because they understood that if a child went to school hungry, learning was almost impossible.

”Strange thing about it is J. Edgar Hoover, first Director of the Federal Bureau of Investigation, said that the Black Panther Party’s free breakfast program was the biggest threat to the internal security of the United States,” Lilley said.

Lilley said things such as free ambulance services and free sickle cell clinics were made possible by organizing, not guns.

”We were showing that we could take care of ourselves. We didn’t have to be dependent on anybody. We could fix our own problems, we could be self-sufficient,” Lilley said.

On Feb. 10, 1971, at 5 a.m., over 100 police officers, sheriff’s department, law enforcement and FBI personnel had surrounded the Black Panther’s headquarters in High Point.

The Eldridge Cleaver faction wanted action. They wanted to take their guns and initiate a “revolution.” The Huey Newton Faction, however, argued that people weren’t ready and that would only cause more deaths.

Lilley said with this new change he found himself lost, dabbling in drugs, without a job — and in a desperate attempt to get back on his feet, he reached out to his father.

”He refused because I was a Black Panther. I took my gun, went out to the streets and did what I had to do,” Lilley said.

Lilley said he found himself going against Black Panther teachings.

“I became a dope dealer. Whatever you wanted, I had,” Lilley said.

After hitting rock bottom, he had an encounter with Jesus and realized the Christian values he now lived by were the foundation of the Black Panther Party.

”We were feeding the hungry, we were clothing those who needed clothes, we were putting shoes on people’s feet, we were taking care of the widows and the orphans.” Lilley said.

Lilley said that’s exactly what he’d been taught over the years.

”The Black Panther Party taught me that. I tell people today, ‘Yes, I’m a pastor, but I’m (also) a community activist, and this is my first calling, this is my true calling,’” Lilley said.