Origins of the World celebrates the female body 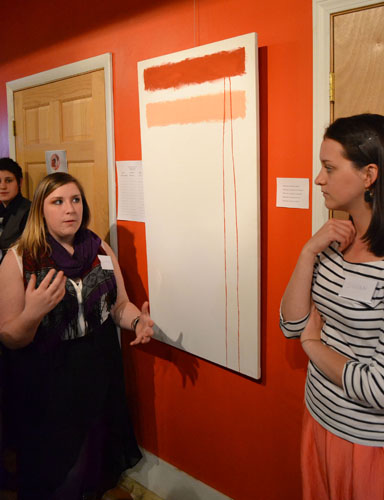 The ASU Women’s Center hosted the Origins of the World Art Gallery Friday at Shear Shakti Salon as a part of First Friday Art Crawl.

The gallery aimed to benefit V-Day, a non-profit organization created to end violence against women worldwide.

The artwork, made completely by students,  focused mainly on the celebration of the female body.

“Women carry so much on their shoulders, in their body and around them,” said Shelby Forsyth, a member of the university’s Women’s Center. “They just emit this energy, and I don’t think they’re appreciated enough.”

The gallery started at the Vagina Monologues, as artists sold artwork during the showings last year on a smaller scale. The gallery was intended to increase visibility of healthy images of the female body, Mackey said.

The gallery’s name is a reference to Italian artist Caravaggio, who was known for his realistic way of depicting humans.

“It’s really just about women and how they give birth to everyone,” said co-curator Jasmine Ammon. “Without women, we wouldn’t be here.”

The amount of artwork presented exceeded many of the volunteer’s expectations.

“We didn’t expect to get this much work,” said Forsyth.

Complimentary food and drinks, donated by the Women’s Center, were served to anyone stopping by to check out the art.

The curators, who will be graduating soon, hope for people to step up and keep the art gallery going in the years to come and eventually make it a regularly occurring event.