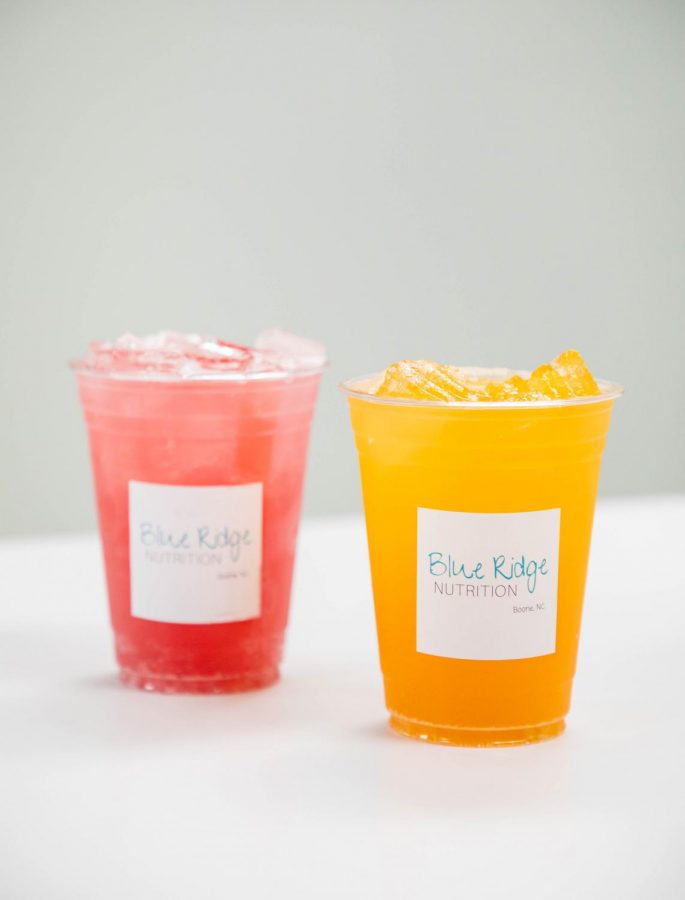 Nestled in the bottom corner of University Overlook, customers file in and out of a blue-walled, black and white polka-dot-covered business. In their hands are different colored teas, milkshakes and smoothies finished with a blue straw and the signature white and blue logo of Blue Ridge Nutrition.

Inside are owners and business students Rachel Skinner and Samantha Leonard. The pair was inspired to open Blue Ridge Nutrition by a health food store in their hometown.

“We have one back home, and I worked at it for over a year or two, my friends own it,” Skinner said. “Then, Samantha texted me one day just asking questions about it, and I told her about it. It was kinda spur of the moment because we were both coming out here for school. I just asked her if she wanted to open one.”

Although not an original business, Leonard, 19, and Skinner, 20, made Blue Ridge Nutrition their very own, customizing it with Skinner’s favorite color, blue.

“The main thing that we really had to do is just get our inventory, but we really made it ours, like a personalization of building the bar and doing the wall mural and everything, so we really just put our special touches on it,” Leonard said.

Senior Mattie Keegan said she enjoys having Blue Ridge Nutrition a walk away from campus.

“It’s very modern and I think very with evolving and helping Boone. It’s very cute and fun,” Keegan said. “I like that they are different and they are very college-friendly.”

However, owning a business is not without challenges. Since opening on Aug. 10, Leonard and Skinner have had to balance class and operating the business. The young owners had to quickly translate their business classes into the real world.

“I mean you can learn a lot in a book but it’s really the experience that you really learn, and with us starting this, we’re getting a lot of experience. But even since we’ve been planning this before we even opened, I feel like we’ve learned so much more about behind the scenes of what goes into a business,” Leonard said.

Although challenging, Skinner said being a business owner by day and student by night is a rewarding experience.

“Everyone has been super positive. On Instagram, they’re like, ‘best new energy place in Boone,’” Skinner said. “So, it’s been crazy and super cool to see.”

Keegan said she admires Skinner and Leonard’s determination to start a business while they are still students.

“I think that’s really awesome that they’re taking initiative in college and taking that chance even though they may not be quite established yet, so that’s cool,” Keegan said.

“There’s nothing really like this here,” Leonard said. “I’ve noticed several sports teams that have come in here after practices, and they just love it because it supports their diet.”

Skinner and Leonard hope to pass down their drink-making skills and continue serving the community with Blue Ridge Nutrition even after they graduate.

“Long term, we just want more people to just keep on working here, and possibly have someone take it over. We just want it to keep going whether we’re here or not because it’s such a good thing here,” Leonard said.