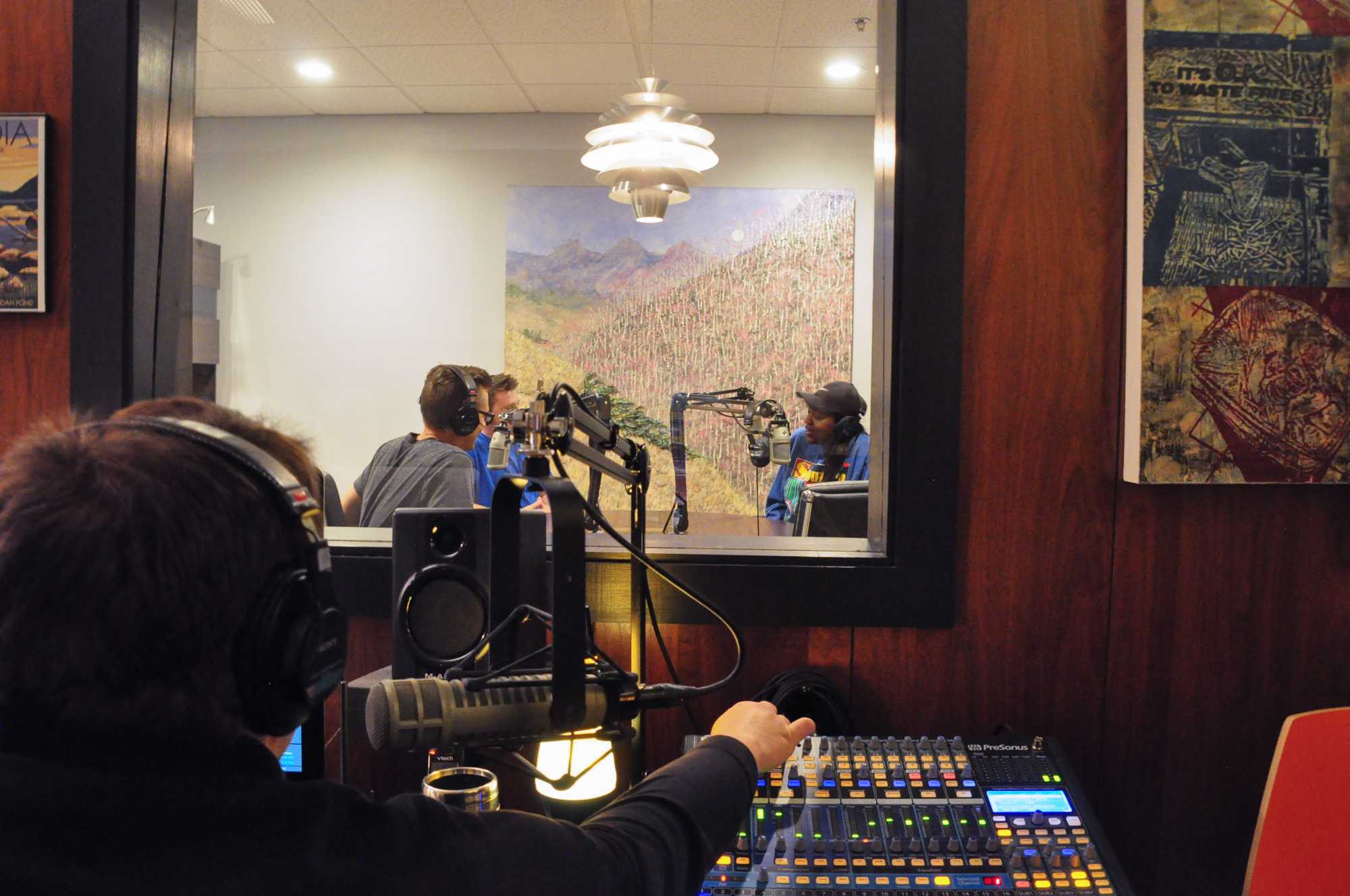 Buried in the basement of Anne Belk Hall, an unexpected den of color and creativity resides.

If you walk through the main doors of Anne Belk, down the front stairs and to the right, you’ll find a bright orange door behind which Appalachian Media Productions lives.

The space has offices for the Appalachian Media Productions team, a green room for podcast guests, the Greg Cuddy podcast studio and a control room for the studio.

It is fully furnished and decorated to suit the production team’s taste. Paintings and photos speckle the walls and coffee mugs litter the kitchenette counter.

“When you walk in Anne Belk it’s very stale, very stoic,” Saray Smalls, wellness coordinator for student programs and the host of a podcast called Smalls Talk, said. “But coming down to the podcast studio, it feels like home.”

The idea for a podcast program arose three years ago when Troy Tuttle, the university’s creative director, was covering alumni awards and met up with Stephen Dubner, the author of Freakonomics and an App State alum.

Dubner showed him and other members of the Appalachian Media Productions team around WNYC, which is a public radio station in New York where many popular podcasts like Serial, Radiolab and All Things Considered are produced.

“It really inspired us,” Tuttle said.

The team told Dubner they were interested starting a podcasting studio program at Appalachian, Tuttle said. He helped out by giving advice and knowledge essential to the formation of the program.

Appalachian Media Productions was given the space for their headquarters and studio in the summer of 2013, but the space was far from habitable.

“Nobody wanted this area,” Tuttle said. “The interior designer for the university said that this was the second worst place on campus. And the worst was the bunkers underneath the Varsity Gym, which had black mold.”

Although it took the whole summer, Tuttle and Garrett Ford, the university’s motion media specialist, revamped the space and made it a suitable home for offices and the podcast studio.

“When you see the pictures it’s incredible that it’s the same place,” Dave Blanks, the university’s production assistant and audio engineer, said.

Tuttle said the renovation was done on the cheap. They did all the painting, picked the furniture and layout, built the baseboards, ripped the existing tiles up, sealed the floor and more.

“It was done anyway we could get it done, because we didn’t have an incredible budget,” Blanks said.

Tuttle said that the environment is essential to the podcast program, and that a good environment gets better interview out of guests.

“We get some people that have been on every TV and radio show in the U.S.,” Tuttle said. “If they walk in and take us seriously right off the bat, we’re gonna get a much better interview.”

The team produces many podcasts. Their focuses vary greatly, and their tones range from serious to humorous.

SoundAffect is a podcast that features “conversations with smart people about stuff that affects our world, and how we affect it,” presenting big topics and discussing them in relation to Appalachian State.

Megan Hayes, Appalachian State director of communications, prepares questions about relevant topics and has conversations with guests on each episode.

The series features lecturers App brings to campus. Tuttle said that the podcast sheds light on the material in the lectures by asking follow-up questions.

“It’s great for us to have access to all these incredible minds that come to Appalachian,” Blanks said. “They share their time with us and we get some amazing conversations that hopefully spread their message.”

Blanks and Tuttle said an episode of SoundAffect earned them a MarCom Platinum award.

They’re especially proud of the award because App’s program was competing to win against heavy contenders, including Fortune 500 companies.

Another podcast called Dave by the Bell asks smaller questions like “What food are you most excited to eat over fall break?” Smalls Talk explores Appalachian students searching for personal wellness and AppX tells the stories of students on campus.

Appalachian Media Productions produces these podcasts and many more for current or incoming students, people interested in attending App in the future, community members and anyone else interested in the topics.