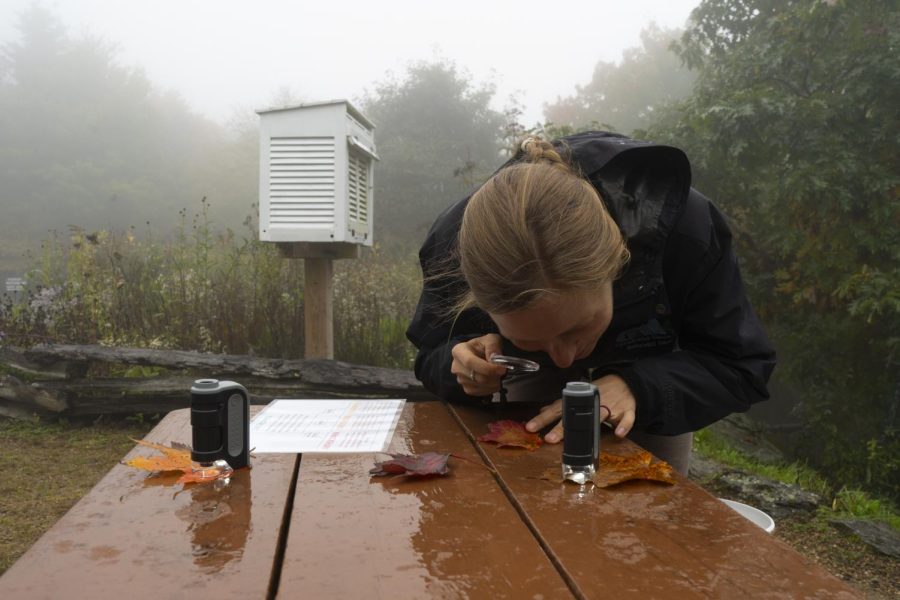 Cassie Petrilla, education specialist, inspects a leaf with a magnifying glass during a demonstration included in a tour of Grandfather Mountain.

Camden, a 6-year-old from Kansas, scampered across the Grandfather Mountain parking lot following one of the park’s naturalist guides and toward a caterpillar hiding under the leaf of a Pipevine bush.

Camden, along with her mother, father and three siblings participated in one of Grandfather Mountain’s Fall Color Rambles Monday afternoon. She is one of many who will experience a guided tour of the fall colors as they reach their peak in the coming weeks.

The tours are free with the $22 price of admission to the park and usually take 20 minutes. According to a press release from Grandfather Mountain Stewardship Foundation, the tours are scheduled at 2 p.m. weather permitting.

Farrell led Monday’s group on a tour of the trees near the top of Grandfather Mountain, including a striped maple whose leaves had already turned yellow while the trees around it remained green.

“Whenever you ask me when something is going to change color, the answer is always going to be ‘it depends,’” Farrell said.

Farrell explained that environmental factors like rainfall, sunshine, elevation and the type of tree effect when the leaves will change. She also said a program developed through App State’s Department of Biology maps the changing fall colors and estimates when regions of North Carolina will be at their peak.

According to the map created by professor Howard Neufield and former professor Michael Denslow, Boone and Watauga County will be at their peak between Oct. 1 and Oct. 14, whereas areas at lower elevations, such as Hendersonville, will not peak until closer to Oct. 28.

“You can see we’re getting pretty close at this elevation,” Farrell said.

Farrell said “peak week” is often one of the busiest times of year for Grandfather Mountain. Tourists from all over the country come to see the leaves change.

Margaret Olshevski came from New York with her camera in the hopes of photographing birds local to the Blue Ridge as well as the changing colors.

“It’s really gorgeous,” Olshevski said. “I’ve been postponing, but I was like ‘no I’m going to this area.’ I wanted to see foliage, and the Blue Ridge Parkway is supposed to be the best.”

Others capitalize on the influx of people. Tommy Suttle sells nuts to passersby on Mitchell Avenue near the Grandfather Mountain entrance.

“I don’t care about the colors,” Suttle said. “I get out of here before it gets real cold in January, February, and (snow) starts piling up, less people come through.”

Farrell said she tailors the fall color rambles to whoever attends the tour and each tour guide takes a different approach. She said Monday’s tour was more child oriented because of how many families attended. But tours composed of mostly adults will learn more about the science of changing leaves.

Farrell led Monday’s group to the pipevine bush and lifted one of the leaves to reveal a pipevine swallowtail caterpillar. She questioned the group about the caterpillar’s distinctive orange dots on its back.

“Why do you think it would want to look scary?” Farrell asked.

“Um so that something doesn’t eat it,” Camden replied.

Farrell agreed with Camden’s assessment of the pipevine swallowtail’s defenses and added they are safe to touch but shouldn’t be eaten, especially by someone the size of a 6-year-old.