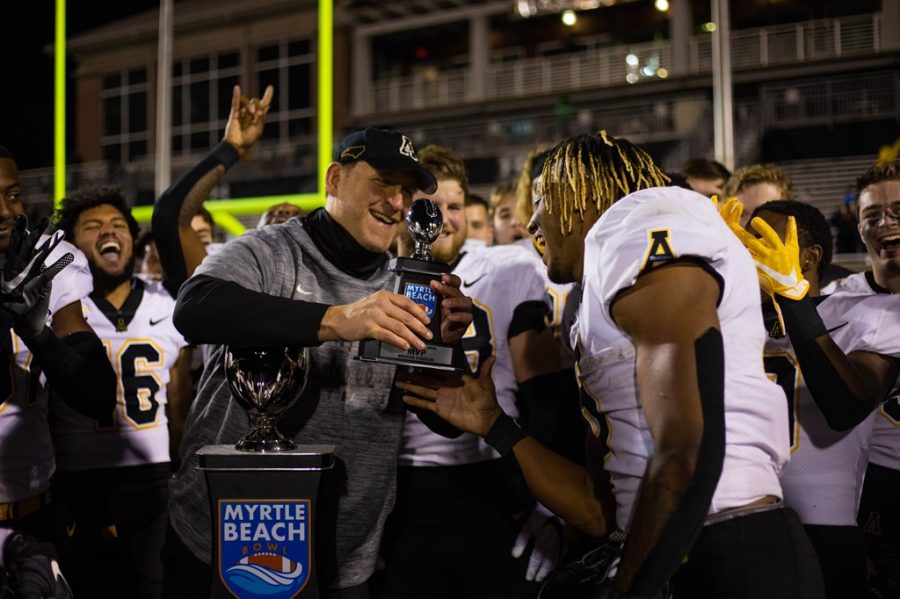 The Mountaineers claimed their sixth consecutive bowl championship on Monday with a 56-28 blowout of North Texas in the inaugural Myrtle Beach Bowl.

“You play the game to win championships,” App State head coach Shawn Clark said. “A lot of weight off our shoulders to win our sixth bowl game in a row, and that’s something we take a lot of pride in in Boone and our program.”

The game was the first bowl of the season and aired on ESPN from Brooks Stadium on Coastal Carolina’s campus in Conway, South Carolina.

Sophomore running back Camerun Peoples stole the show and led the way for the Mountaineers with a record-setting 319 yards and five touchdowns on 23 rushes.

The 319 yards is the most in bowl game history and the most in a single game in App State program history, breaking a record previously set by Mountaineer quarterback Armanti Edwards in 2007.

The five touchdowns tied with Oklahoma State and Detroit Lions legend Barry Sanders, among others, for the most ever in a bowl game.

“This is probably one of the most memorable football games I’ve ever played,” Peoples said. “I didn’t realize what I was doing until the fourth quarter.”

The Mountaineers struck first on a double-pass trick play from senior quarterback Zac Thomas out wide to senior wide receiver Malik Williams, who found junior tight end Henry Pearson for a 22-yard touchdown. The completion was the fourth of Williams’ career, and each of his completions went for touchdowns. He tossed two touchdown passes in the 2018 New Orleans Bowl win over Middle Tennessee State.

The next score of the day came on a three-yard run from Peoples with about three minutes left in the first quarter to give App State an early 14-0 lead.

North Texas answered with a touchdown of their own, but the Mountaineer offense was just warming up. With six minutes left before halftime, Pearson caught an 11-yard TD. Then, at the 2:29 mark, senior running back Marcus Williams Jr. broke loose for a 70-yard TD strike to give App State a commanding 28-7 advantage.

With just 27 seconds before the break, the Mean Green found the end zone to pull back within 14 of the Mountaineers. But, Peoples gave App State the last laugh of the half, taking the first play of the ensuing drive 64-yards for his second TD of the day. The Mountaineers led 35-14 at the break.

North Texas opened scoring in the second half with a touchdown at the 6:14 mark in the third quarter. Then, Peoples scored the next three touchdowns of the game to put the game out of reach, stretching the Mountaineer lead to 56-21 with nine minutes to play.

The win gave App State a nine-win or more season for the sixth year in a row, a streak only matched by Alabama and Clemson nationally.

Peoples’ outburst gave the Mountaineers a 1,000-yard rusher for the ninth straight season, the second longest streak in the nation behind only Boise State.

The 56 points was the most in a game for App State since the Nov. 16, 2019 matchup against Georgia State.

The Black and Gold offense racked up 638 yards of total offense and averaged 11 yards per play on the day.

On defense, the Mountaineers were fueled by a team-high of 13 total tackles from senior safety Kaiden Smith, and 12 apiece from junior linebackers Trey Cobb and D’Marco Jackson. Smith’s 13 tackles are the most for an App State player in a bowl game. Jackson also added a pair of tackles for loss and a sack.

“It’s been an up-and-down year,” Jackson said. “You had to have mental toughness to really finish this year … After taking a loss, we were able to bounce back and I’m proud of the boys for doing that, putting it behind and finishing strong.”

Junior cornerback Steven Jones also caught an interception in the fourth quarter and returned it 63 yards to set up one of Peoples’ scores.

In a year unlike any other that saw three big games come down to the wire but go the wrong way in the end for App State, the Mountaineers finished the season on a high note with a dominant bowl win to keep the streak alive.

“Our guys are resilient, and I told our guys we’d be remembered for how we finished this season,” Clark said. “We finished it the right way against a very good opponent.”