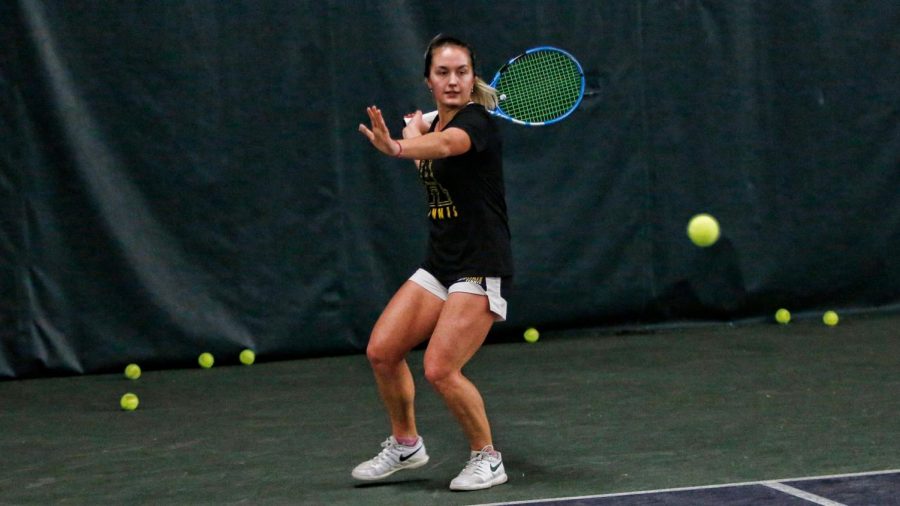 Junior Sasha Pisareva is the No. 1 seed for the women's tennis team this season. Pisareva has picked up wins over NC State and Virginia Tech this season.

As a child living in Ukraine, Sasha Pisareva tried following in the footsteps of her parents by dancing ballet. However, those were big steps to follow. Her father is Ukrainian dancer Vadim Pisaryev and her mother is ballet répétiteur Inna Dorofeeva, both of whom are well known in Ukraine.

“I tried ballet, too and said, ‘Sorry, it’s not my thing,’ and I was a little strong and chubby, so that was not my thing, and then I tried tennis after that, and I said, ‘OK, I like it. Let’s play tennis,’” Pisareva said.

Despite going against the family business, Pisareva’s parents supported her when she traded in her pointe shoes for a tennis racket, which ended up paying off, considering she became the first player in program history to receive an ITA national ranking, currently sitting at No. 48.

Before Pisareva was a Mountaineer, she was a Utah State University Aggie, where she spent her first two years of college. Moving from Kyiv, Ukraine, to Logan, Utah, came with struggles.

“It was a little bit hard at first because I didn’t know the language that well and couldn’t speak, so nobody would understand what I said. But then, I made some really good friends and some of my teammates were nice,” Pisareva, junior, said.

Pisareva had an impressive two-year run at Utah State with a 44-21 singles record, but despite this success, she wanted a new experience and transferred to App State.

“Just based on her results from Utah State, I knew she was a great player,” head women’s tennis coach Blake Mosley said. ”Being in Colorado, I know a lot of coaches from the Mountain West Conference. I spoke to everyone that I knew out there, and they all told me the same thing. That if you could get her, you gotta get her on campus because she’s an overall great person, and her tennis level obviously speaks for itself.”

Unfortunately, Pisareva couldn’t play when she first got to App State. Pisareva took many English as a Second Language classes her first year at Utah State, but those credits didn’t transfer to App State. As a result, she was not eligible to play during the fall tennis season in 2019 and spent the summer and fall retaking those classes.

“I think she was really motivated from not playing for a semester; she was ready,” said Maria Zacarias, Pisareva’s teammate and roommate. “I think she’s really humble, so that helps her to have more confidence.”

Pisareva’s wait was finally over on Jan. 20, when the Mountaineers opened their season against NC State, the No. 8 ranked team in the country. In her debut match in the Black and Gold, Pisareva grabbed an upset win by beating No. 18 Anna Rodgers in straight sets.

“I was really excited to play my first match, and I had this fire in me, and I went on the court, and I said, ‘Okay, let’s go. It doesn’t matter who you’re playing, just do your best and everything is possible,’” Pisareva said.

In her next match, she grabbed a second Power Five win over Virginia Tech’s Natalie Novotna. These two wins were enough to crown her the Sun Belt Women’s Tennis Player of the Week in back-to-back weeks, making her the first App State tennis player to do so since the team joined the conference in 2014.

Before matches, Pisareva listens to rapper Roddy Ricch’s new album to hype herself up, and during matches she fights for every ball and screams after every point. But, if you catch her off the court, you’ll see quite the opposite.

“I’m very shy in real life, and it’s sometimes hard for me to express myself somewhat, but on the tennis court in the match, I’m a completely different person,” Pisareva said. “I’m just giving all my energy there, so it helps me to play my style because my style is aggressive tennis. I’m always trying to push the opponent and make pressure.”

The shy star joins an already-talented team that’s coming off of its best season in school history after going 15-6 and winning the Sun Belt regular-season championship.

“I always support my teammates and have great interpersonal relationships with them, and the main goal for me is to just be there for them and support them, and I think we can do great things,” Pisareva said. “We can win a championship as long as we can be on the same page.”

Pisareva and the rest of the women’s tennis team return to action Feb. 11 at home versus UNCG.