Plummer off to a quick start 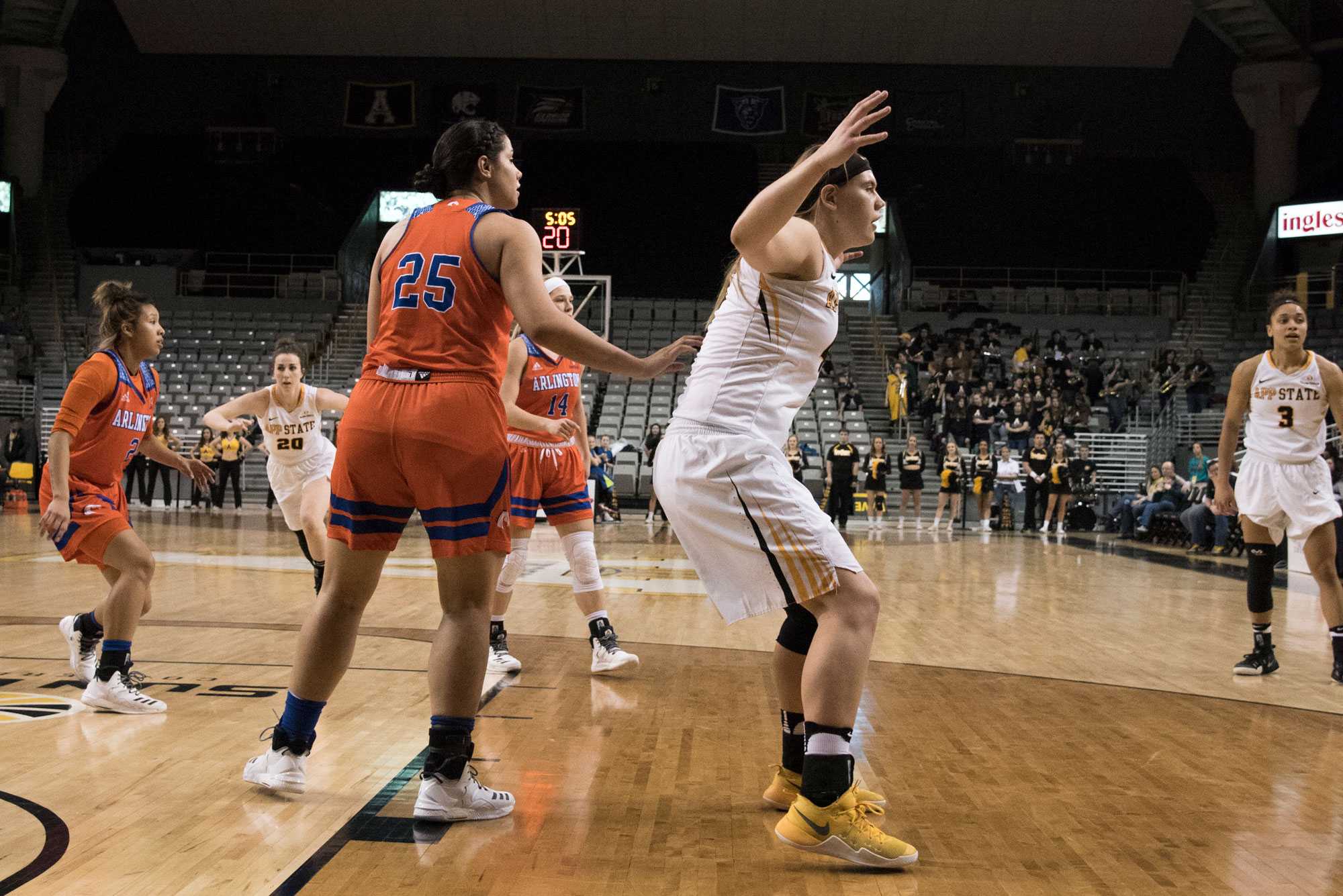 Freshman center/forward Bayley Plummer attempts to block the pass during the game against UT Arlington.

When Bayley Plummer arrived on campus this fall, she already had a long history of athletic success. In high school, Bayley was an all-conference performer in golf, softball and basketball, and an all-state performer in both basketball and softball.

While Plummer was very successful as a three-sport athlete, basketball is where she truly excelled. She was a four year varsity starter at East Davidson where she played center, and in her senior season of high school she averaged nearly a triple-double, averaging 18.5 points per game, 16 rebounds per game and 8.1 blocks per game.

When it came to choosing a college, Appalachian State was already a top contender. The university had previously helped Anna Freeman, another East Davidson alumni, find success at the collegiate level.

Once the decision to come to App was made and Plummer arrived on campus, she continued the hard work that gave her so much success in high school.

“She’s one of the first people in the gym every single day,” Mountaineer’s assistant coach Kate Dempsey said.

That hard work is already paying dividends for Plummer who has already had the first double-double of her college career, and has led the team in rebounding six games this year.

“I think her natural athleticism and her build have helped her [transition so quickly to the collegiate game],” Dempsey said. “That, along with her dedication to wanting to be better and wanting to expand the growth of her game have really helped her.”

Despite all the success Plummer has found so early in her career, one would never know it by taking to her. Plummer is quick to give the credit for her success to teammates and coaches, and uses that humble nature to help her game grow.

“Bayley is a really great person. I know that sounds generic to say, but Bayley is a hard worker and is excited to be in the gym every single day,” Dempsey said. “You can see her progression from when she arrived on campus till now. She’s an exceptional person to be around, and she really loves her teammates.”

Not only is Plummer a positive person to be around with the team, but she makes sure to study the game and become more knowledgeable, which only furthers her game.

“Bayley is very attune to film and making adjustments that help her and her team,” Dempsey said. “She has worked very hard, and is going to work very hard to be an impact player for this program.”

Senior forward Bria Carter also attributed much of Plummer’s success to her confidence.

“She came in and wasn’t afraid to play,” Carter said. “She’s been going hard getting to the boards and getting her points, and she’s made a big impact on this team.”

Even though opposing teams are starting to take notice of the freshman center, Carter believes the success Plummer has found so early on in her career will continue long into the future.

“She has a lot of confidence in her game, and she has a lot moves down in the post,” Carter said. “She has finesse, and that’s not easy for other teams to prepare for with a player of her stature. That really sets her apart.”

Now that Plummer is fully focused on the playing at the college level, that doesn’t mean her high school accolades are finished rolling in. On Feb. 7, Plummer attended a halftime ceremony in her hometown of Thomasville, North Carolina that was held in her honor where her high school jersey was retired.

“I went down with my roommate. Everyone came out and it was great to see the small city of Thomasville who supported me during my high school games again,” Plummer said. “It was good to be a part of that very special and great honor. Not many people get their jersey retired, and for that to happen to me was really special.”

If history holds as any indicator of what will happen in the future based on all the success Plummer has already had, that there’s still plenty of big things to be expect from Plummer at App State.