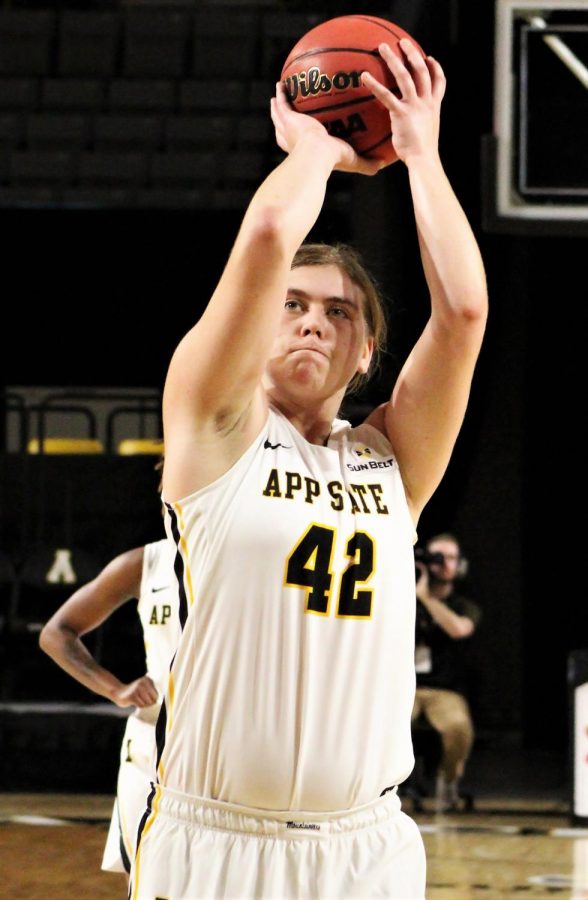 When the final buzzer sounded in the last game of the 2018-19 season, the App State women’s basketball team was the winner of the Women’s Basketball Invitational tournament. The 22-win season was huge for the program, and for star forward Bayley Plummer, it meant a little bit more.

“My best memory is definitely winning the WBI Championship last year,” Plummer said. “That was something unforgettable.”

Head coach Angel Elderkin remembers Plummer’s first two seasons and how difficult it was for her to adjust to playing at a college level.

“I think all freshmen struggle with ‘I’m a freshman in college, and I just came from being all-everything at my high school,’ so she had a learning curve,” Elderkin said. “And then her sophomore year, we relied heavily on her . . . so, she’s trying to find her way as a player and then also (trying) to be a leader.”

Plummer’s second year did not disappoint. She started all 31 games for the Mountaineers and had a sophomore record of 355 rebounds, which led the team and the Sun Belt with 11.5 rebounds per game. In addition, Plummer tacked on nine points per game, which was the third best on the team.

Plummer said she believes there were a few factors that brought her game to the next level.

“A lot of hard work, a lot of hours spent off the court, I believe, just getting in extra work, and just really being dedicated to take my game to the next level,” Plummer said. “I’ve got some really great coaches and support staff that really support me in all that I do, so they’ve really helped me to grow into the person I am today.”

Last season, Plummer didn’t slow down. Once again, she led the conference in rebounds with 12.9 per game and destroyed the App State single season rebounding record with 463. Plummer also started all 36 games, which extended her streak of consecutive starts to 67 games. Plummer’s contributions helped lead the team to its first winning record since the 2012-13 season, when they finished 20-11.

“Sometimes, you have to really get to the bottom before you can get to the top, and the first two years were definitely the epitome of that,” Plummer said. “We were pretty low right there, but last year, it was nice to taste a little bit of success and just keep working hard and keep fighting, and it was nice to be rewarded.”

Armani Hampton, who has played with Plummer throughout her entire college career, has seen the impact someone like Plummer can have on a team firsthand.

“Even if you miss a shot, Bayley’s always there,” Hampton said. “When you pass it in, (if) she doesn’t have a shot, you know you can count on Bayley to kick it out, and that’s where a lot of our play comes from.”

This season, Plummer will look to be even more of a leader and role model. Freshman forward Jackie Christ is trying to follow in Plummer’s footsteps for years to come.

“I look up to her in every way. She’s not only an amazing basketball player, but she’s also a great person. She’s a hard worker,” Christ said. “If I could be anything like her going through this program, this is a great person to look up to, and I hope I’m any bit as good as her.”

Elderkin said she appreciates how Plummer helps the freshmen out in a way that a coach might not be able to.

“She can talk to freshmen and keep it real in terms of everything she went through, and there’s a light at the end of the tunnel. You just got to make it through freshman year,” Elderkin said.

Beyond the statistics and recognition, Plummer has a different personal goal for her last season.

“(I’ll) just go out and have fun,” Plummer said. “It’s my senior season. This is the last time I’ll be playing basketball. It’s kind of scary for life after sports, but I’m excited just to go into senior season with an open mind and just (as) ready to attack it as the last three years.”