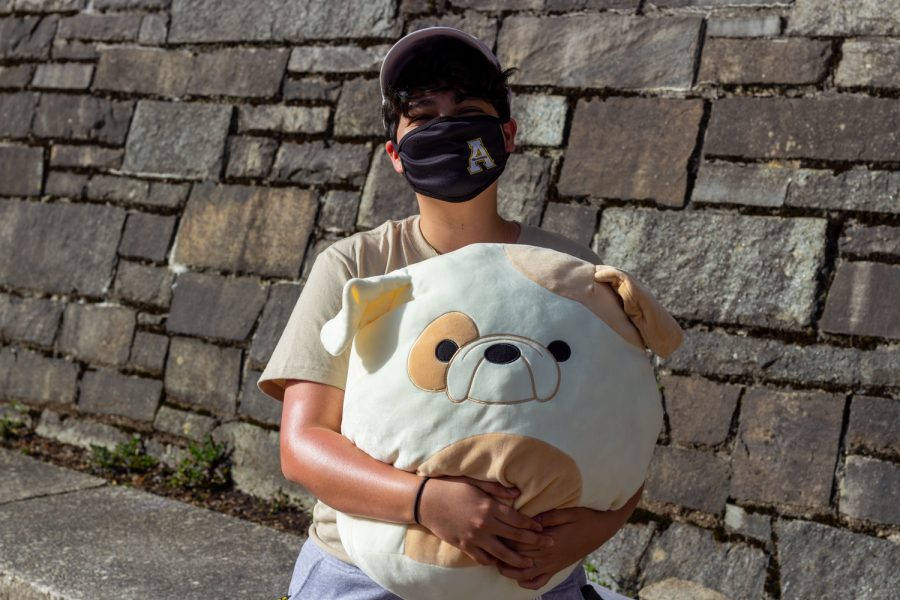 Paola Bula Blanco with their Squishmallow that was give to them by Marlén Cárdenas.

The Boone Walgreens’ phone goes off several times a day, but those calls don’t always involve questions about medicine.

Propelled to popularity by the video-sharing app TikTok, Squishmallows, plush toys that come with their own creative names and personalities, have risen to popularity in Boone and all around the world. However, fans of the stuffed animals are finding it hard to obtain them in town.

Started in 2017 by Kellytoy, Squishmallows offer customers over 500 characters to collect, like Holly the Owl or Piper the Penguin. Last year, the company announced that they had sold over 50 million Squishmallows.

Now, Boone residents and App State students have created a market in town for the plush toys, watching the local Walgreens, which supplies them, and filling App State Classifieds with posts searching for specific characters or the sale of others.

“When we get them in, they’re like gone almost instantly, and we get calls about them all the time to see if we have any more,” Walgreens employee Nik Gentry said.

However, the Boone Walgreens isn’t the only place to buy the toys. Fans of Squishmallows can sometimes find them locally or for sale on online.

Juliet Lambert, a self-proclaimed Squishmallow fan, has around 10 Squishmallows. Recently, she took to App State Classifieds to find her boyfriend’s sister the Connor the Cow Squishmallow after struggling to find one anywhere within 50 miles of Boone.

“I think it would be nicer if more stores in Boone had them,” Lambert said. “But I think just because there’s so many college students here and that kind of blew up, that it makes that they’re harder to find here.”

Paola Bula Blanco, who uses they/them pronouns, received their Squishmallow as a gift, but echoed a similar hope of having easier access to the stuffed animals.

“It would be nice if most things that get really popular like that could be found in Boone,” Bula Blanco said. “Just cause, I don’t know, I feel like we don’t usually get a lot of really cool stuff here, which is fine cause we’re a little bit hidden in the mountains, but I would definitely like to have easier access to them.”

Squishmallows have over 30 retailers in the U.S., but Boone only has six of these locations and stock of the plush toy sells out quickly. Online retailers often sell out quickly as well. Others like Owl & Goose Gifts, a curated collection of fan favorite toy brands like Squishmallows, limit purchase quantity due to high demand.

Gentry said Walgreens often doesn’t know when the next restock will occur. The pharmacy receives shipments of inventory every Wednesday, but the staff doesn’t know what will be on each truck.

Some customers also stock up on the Squishmallows when they find them, oftentimes reselling the toy for a profit on Ebay or Etsy.

Lambert has been collecting Squishmallows since 2018, buying most of them from outside of Boone in her hometown where they’re easier to find.

“I’ve gotten the best luck out of Boone just because, since this is a college town and a lot of people love them,” Lambert said.

Some Boone Squishmallow fans experiencing the same struggle to find the plush toy in town go on what Lambert calls “Squish hunting,” which she describes as riding to different locations known for selling the stuffed animal in order to find one.

“We kind of make it like a little fun adventure, just like a little quest that we can do to hang out,” Lambert said. “We’ll hit up all the stores that we know will have them like HomeGoods or Claire’s, and we’ll just see if they have any that day.”

Although having skipped the struggle to locate a Squishmallow in Boone, Bula Blanco said they think selling Squishmallows on App State Classifieds is the easiest way to hunt down the Squishmallow you’ve been searching for.

“I think it’s a really smart thing to do, especially because you can’t find them around here,” Bula Blanco said. “I feel like if I was the type of person that really, really wanted a Squishmallow specifically, I’d probably go on there and buy one.”

Bula Blanco attributes the popularity of Squishmallows to their cute exterior and the amount of time people are spending at home, understanding why college students are attracted to the plush toy.

“I just think that they’re really cute, and I think with everyone being home now, everyones got a lot of time to just relax, and they make really good pillows,” Bula Blanco said.

Acting as both decoration and a comfort, Lambert believes Squishmallows create the perfect distraction from a global pandemic.

“I think honestly during COVID, it’s a very harmless thing,” Lambert said. “College kids have been kinda stuck in their rooms so why not get something that is like comfort to them.”