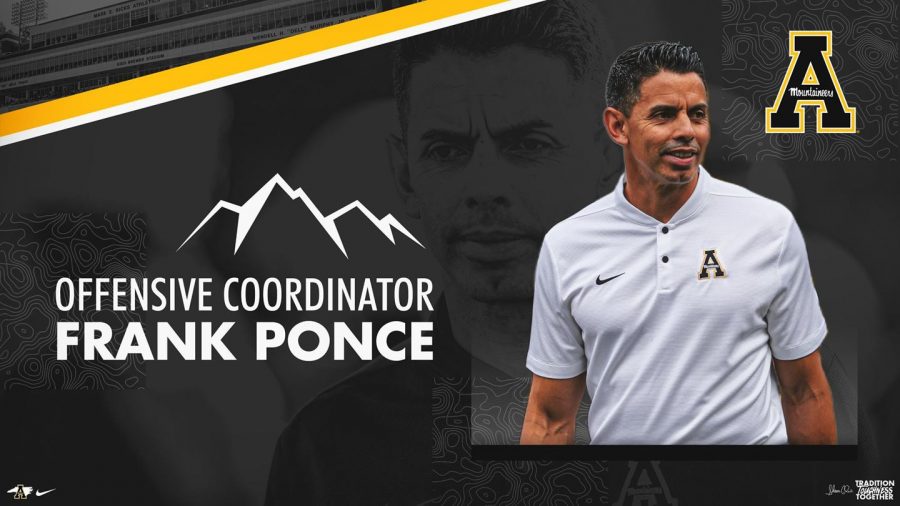 Ponce enjoyed a successful first stint with the Mountaineers from 2013-18 when he served as an offensive assistant and co-offensive coordinator.

“I’m excited to be back. It’s something that I’m looking forward to. It’s a new challenge for me, something that I’ve prepared for, and I think I’m ready for,” Ponce said. “Great fans, great university and a winning tradition, and obviously, can’t wait to meet the guys and start working with them already.”

Ponce and Clark met while serving as the Mountaineers’ co-offensive coordinators under head coach Scott Satterfield from 2016-18, with Ponce in charge of the passing game and Clark overseeing the running game.

“I had a chance to work with him for four years, and just the way he demanded excellence from that (QB) room was something to watch,” Clark said. “I have a lot of confidence in him as the play-caller of this program, and he’ll have full reign of calling the plays.”

When Satterfield left App State to take over at Louisville in 2019, Ponce went with him and served as the Cardinals’ passing game coordinator and quarterbacks coach.

“Appreciate all you have done for me and my family the last 10 years! Happy for you,” Satterfield wrote in a tweet congratulating Ponce. “You are in good hands back on the mountain!!”

The 2021 season will be Ponce’s first time not on a staff with Satterfield in eight seasons.

“Goodbye is always tough, especially when it’s somebody you appreciate and has looked after you and always taken care of you,” Ponce said. “But again, working for another great coach here in coach Clark, and I’m excited.”

Clark said that when he assembled his staff ahead of the 2019 season, he reached out to Ponce about returning to Boone, but they couldn’t make it work at the time. One year later, Petersen called Clark the day after Christmas to let him know he was taking the job at Illinois.

“The first phone call I had was with coach Ponce,” Clark said.

The discussion continued, but Clark said he brought in two other candidates to interview for the OC job.

“I just felt what was best for this program, and the familiarity I had with coach Ponce, it was the best decision for the program,” Clark said.

Ponce was a standout high school quarterback at Miami Senior and was a high school coach in the area for over a decade at the beginning of his career. His strong ties to the area should help continue to strengthen the south-Florida-to-Boone football pipeline.

“Coming from Miami, Florida to the mountains of Boone, North Carolina was a culture shock for me, but it’s something I got used to, and I really love this town,” Ponce said.

While most of Ponce’s past App State players have graduated, the extra year of eligibility granted by the NCAA has allowed a few members of the offense to stick around. Wide receivers Thomas Hennigan, Jalen Virgil and Malik Williams were sophomores when Ponce left, and each announced they’ll be returning to the team in 2021.

“When I left, they were babies. They’re grown men right now,” Ponce said.

Ponce said he watched film with recruiting coordinator/tight ends coach Justin Watts and saw a receiver make an impressive play and asked Watts who it was.

“Coach Watts said ‘that’s Malik,’ and I was like, ‘man, he looks super fast,’” Ponce said.

Many internal changes have affected the App State program since Ponce last was on the staff, but the tradition is still just as strong.

“I’m grateful for coach Clark for thinking highly of me and giving me the opportunity,” Ponce said. “I’m excited to get started.”