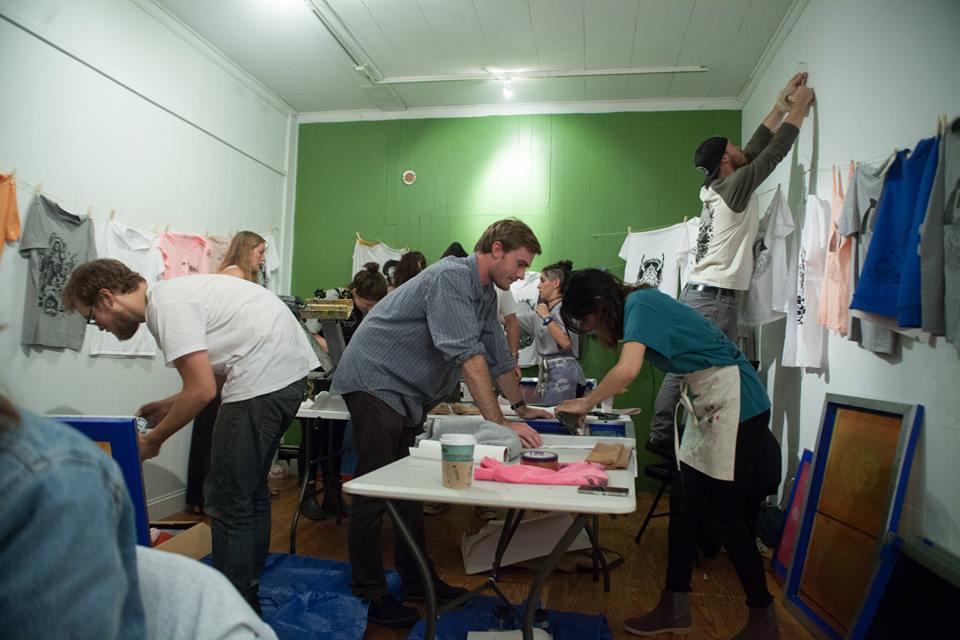 Paint-splattered, denim-clad students trickled into Wey Hall room 108 on Aug. 31, at 6:30 p.m. The studio room quickly became crowded, and many students lined the perimeter, attending the first meeting of the year for the Appalachian Printmaking Club.

Founded in fall 2015, this is the start of Appalachian Printmaking Club’s second year on campus. As a club within the visual arts department, it focuses primarily on a printmaking process called relief and screen printing.

Club president and current senior Erina Schultz is one of the many artists on campus that is passionate about printmaking. Schultz, along with other club members, hopes to see more people becoming involved in the club and learning more about the medium.

“A lot of people don’t know about printmaking. It’s kind of sad,” she said.

In response to this lack of awareness, a group of students who were invested in this art medium formed the club. The Appalachian Printmaking Club is fully student run, student taught and student led. One aspect that makes the learning experience within printmaking club valuable is that there is “no professor grading you,” Schultz said.

Along the lines of a “grade-free” learning space, Printmaking Club hopes not only to inspire arts majors, but also students and community members from all backgrounds. At the interest meeting, attendees’ majors ranged from political science to biology to dance.

In order to have studio access for printmaking, students are required to be a visual arts major. However, by joining Printmaking Club, students are able to gain studio access during club meetings, which generally involve getting right to work on projects and hands-on learning within the studio. Along with this studio access and work time, Schultz believes that Printmaking Club is a beneficial opportunity for anyone who is interested, even if they are inexperienced because “it allows people to join and see if it’s the right process for them,” Schultz said.

When joining the club, dues are $15, which helps cover costs for materials and projects. Additionally, the club is already discussing events for the upcoming semester and year to be funded by these dues.

At the meeting, members discussed their past fundraising ideas and involvements. One of Printmaking Club’s most successful events last year involved organizing a timeframe in which students across the campus could bring any garment of their choice – including T-shirts, bags, patches, hoodies or anything of that nature – and have the club print a design on it for a cost of $5. The club printed on each item with black ink and allowed students to choose from an array of different designs. When the club held one of their T-shirt printing events in October 2015, it was so successful that they had to stop taking requests, but offered students a selection of pre-printed tees and a promise of future events. Along with this particular event, the club has frequently sold donuts, coffee and various prints to raise money for supplies and necessities involved in the printmaking art form.

Eliana Rodriguez, a club member, explained the relevance of printmaking club to her.

“For me, as an artist, printmaking club is really important to me because I’m able to do what I love and share that with others,” Rodriguez said. “Printmaking is one of the lesser known mediums so finding other people who do printmaking isn’t easy. Through the club, I’m able to meet other printmakers and introduce printmaking to people that may have never known what it is.”

Famous artists such as Pablo Picasso, Rembrandt, Francisco Goya, Henri de Toulouse-Lautrec and Andy Warhol all had a hand in printmaking. Warhol is attributed for being an extremely influential printmaker. During the 1960’s, some of his most well-known works are recognized as pop-culture icons, such as his prints of Marilyn Monroe. Schultz mentioned that many people don’t realize how many renowned artists were printmakers.

“Most really well-known artists have done printmaking, like famous painters; they have all done the process of printmaking,” Shultz said.

With a primary focus on relief printing and screen printing within the club, these two processes allow differing results and experiences. Screen printing typically involves using stencils and layering different colors and stencils on top of one another. As a whole, screen printing allows for livelier colors in comparison to relief. Screen printing is used for printing on clothing, but also can be used for various items such as decals and balloons. In contrast, relief printing often includes techniques such as lithography, engraving, drypoint and etching. Items such as woodcuts and linocuts have often been historically used for moveable type processes and illustrations, amongst others.

The club aims to attend SGCI, which stands for the South Graphics Council International. The yearly conference, held this year in April 2017 in Atlanta, Georgia, is the largest printmaking conference in the nation. At the conference, printmakers from across the country showcase their art, network and learn more about the processes at hand.

As a whole, Printmaking Club prides themselves on being not only a place for artistic expression, but a place to learn more about an ancient but ever-expanding art form. In Appalachian Printmaking Club’s own words, courtesy of their Facebook page, “We are the best club you’ll ever be a part of.”