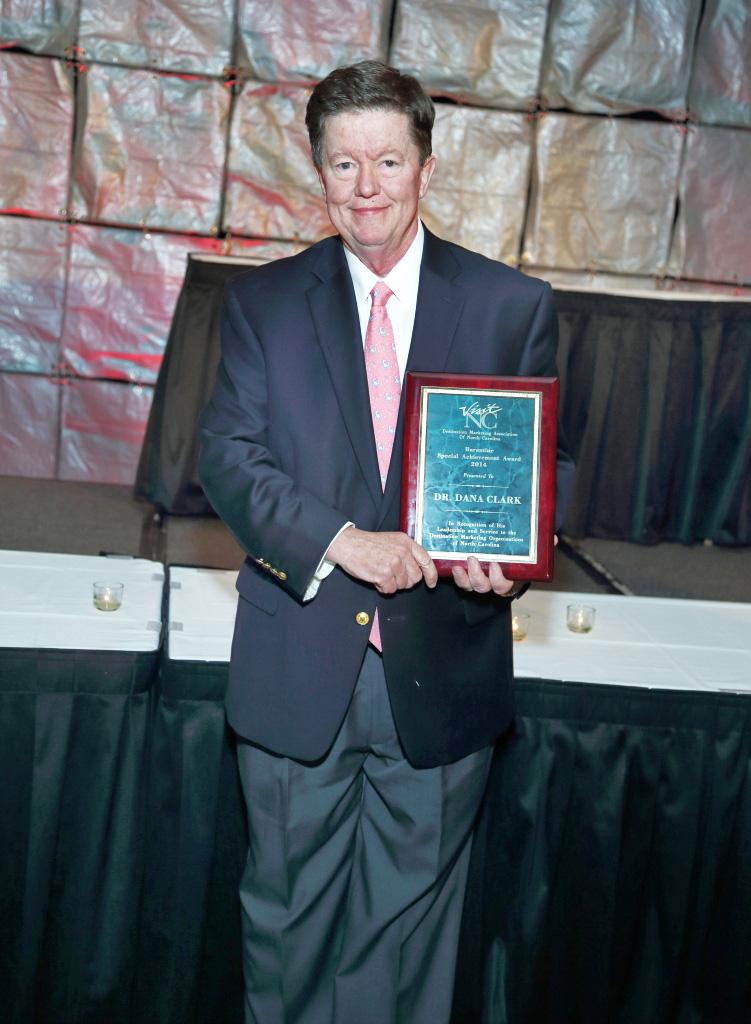 Hospitality and tourism management professor Dana Clark won the Barentine Special Achievement Award from the Destination Marketing Association of North Carolina for the way he ties his involvement with the tourism industry into his lessons in the classroom. Photo courtesy of Richard Gorberg

An Appalachian State University business professor and hospitality and tourism management director received the 2014 Barentine Special Achievement Award for his close involvement with the tourism industry and the success of his students.

Dana Clark accepted the award two weeks ago at the 2014 North Carolina Tourism Leadership Conference in Winston-Salem. The award is given annually to honor an individual who has made significant and sustained contributions to the state or national tourism industry by Destination Marketing Association of North Carolina.

The honor is usually awarded to people who actually work in the tourism industry, but Clark was given the honor because of his work with students.

“Usually, it’s an industry award, and as an academic, it wasn’t one I was expecting to win,” Clark said. “But I’ve done consulting with a lot of [destination marketing firms], and have interned a lot of students and have had a number of students go to work at various places.”

Clark said he often assigns student projects where he sends them to work with tourism agencies in order to give them hands-on experience.

“Instead of just reading the theory of writing a marketing plan for a convention bureau in a city, they have to go out and actually work with a city and read their marketing plan,” Clark said.

Carol Kline, an associate management professor in the Walker College of Business said Clark is known for being helpful to students inside and outside of the classroom.

“He’s very personable with his students,” Kline said. “He has a personal connection with each one of his students; he’s not one of those professors that still hasn’t learned people’s names by the end of the semester.”

Clark also brings guest speakers into class from tourism businesses so that his students can network.

“We bring a lot of industry people to class, and they speak to the class and then we always do a lunch and, or, dinner where the students are free to come and get to know the speakers in a more informal setting,” Clark said.

Clark has been heavily involved with the tourism industry for many years. He worked in the hotel business for nearly 14 years and served as the vice president of convention development for the Charlotte Conventions and Visitors Bureau prior to becoming a professor.

“Dr. Clark was given this award because of his service in the industry over so many years, and in so many ways,” Kline said. “He teaches students that then go out and populate the industry, he represents a lot of interests on many boards and he does consulting in the industry.”

Clark is the only person ever to win all three of North Carolina’s prestigious tourism awards. The other two are the Charles J. Parker Tourism Excellence for Public Service Award, and the Tourism Excellence Award for an Individual. The latter achievement has had numerous notable winners, such as Walter Cronkite.

“I was dumbfounded,” Clark said. “It caught me so completely by surprise that when I stepped up to the dais, I was tongue-tied; all I could say was ‘thank you.’”