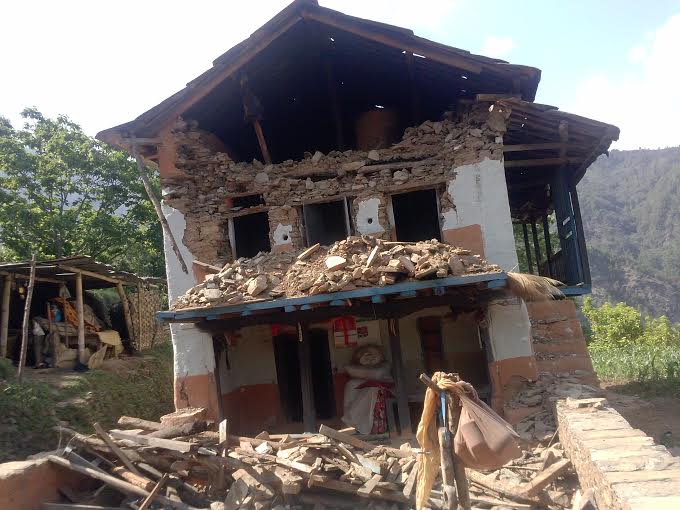 At 3 a.m. on April 25, Dinesh Paudel experienced what he calls the “nightmare situation.”

Paudel, a sustainable development professor at Appalachian State University and a native of Nepal, received a brief call from a friend in Nepal informing him of the 7.8 magnitude earthquake which had just struck the country.

It took Paudel 10 hours and hundreds of phone calls before he finally got in touch with family.

When Paudel was finally able to speak with his father, he learned that while the entire family was alive, everything had been destroyed.

Paudel, who was in Chicago for a conference at the time, flew back to Boone as soon as he could. Upon his return, numerous members of the sustainable development department began to reach out to him.

Department chair Sandra Lubarsky said she thought of Paudel when she heard news of the earthquake and sent out an email to faculty within the department. Most of  the faculty gathered in his office the following Monday, asking what they could do to help, Lubarsky said.

The meeting launched a fundraising effort through the department which raised $8,000 within a week. Paudel said the money was raised not only from people in the department, but also other colleagues as well as individuals in the community.

After a week, Paudel returned to Nepal, intent on using the money to help the people of Saipu, his village. Paudel said the first meeting with his family was “overwhelming. We were all smiling to some extent.”

“The destruction was  more than I had imagined,” Paudel said.

Of the 632 houses in the village, he estimated that two were still standing. The extent of the destruction reached far beyond just material damage, he said.

“Cultural destruction was the biggest part,” Paudel said. “A lot of people valued the things they had in their houses more than their houses.”

The destroyed personal objects caused a particularly deep sense of loss because of the way these objects represented a connection to past generations, Paudel said. 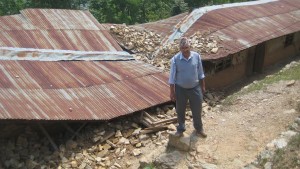 During Paudel’s month-long stay, another earthquake occurred on May 12. The second earthquake, which the U.S. Geological Survey reported to be a 7.3 magnitude quake with an epicenter in the north-eastern part of the country, was closer to Paudel’s village than the previous one had been.

Paudel was working on a temporary shelter when the earthquake hit. The structure collapsed behind him as he tried to run away.

“It was like running in a swimming pool,” Paudel said.

The proximity of the earthquake meant that it did more damage in the village than the previous earthquake had, Paudel said. Although his family’s home had been rendered uninhabitable by the first earthquake, it was the second which took the structure down, Paudel said.

In the aftermath of the earthquake, Paudel said he observed numerous instances of people coming together. The crime rate went down, Paudel said, in part because people “kept their differences aside” in the face of the enormous destruction.

“The biggest help they got was from each other,” he said.

People from across villages came together in order to collaborate on building projects as a means of building social bonds, Paudel said.

One such project is of particular significance to him: the rebuilding of Saipu’s school.

Paudel was responsible for constructing the original school in 2000. He said he was motivated by a desire to provide convenient access to education for children, particularly girls like his sisters.

So far, work has begun clearing away debris for the new site and Paudel said he was in the process of looking for appropriate material to use for the new school.

Paudel is critical of many of the international organizations which have been working in Nepal. Many of the organizations lack the appropriate level of familiarity with the locality, people and culture to be effective in meeting needs, Paudel said.

In addition, relief efforts by these international organizations can increase established social inequality by concentrating aid in wealthier, urban areas, rather than in poorer, more rural areas.

When donating to relief efforts, Paudel said people should look for organizations which have systems in place that engage regularly with a nation’s inhabitants and have local people as part of the organizational governing structure.

The Red Cross is an example  of an organization with the potential to be effective, Paudel said.

Paudel, who had only been at Appalachian a year before the earthquake, said he was surprised by the outpouring of support. From the moment he had come to the area, however, he saw connections between Boone and Nepal.

“Am I back in my village?” Paudel said, recalling his thoughts upon first coming to the area.

Paudel said the fact that both his village in Nepal and Boone are communities in mountainous regions creates a number of similarities between the two. For one, there is a perception of the areas as places with poorer, less educated residents.

At the same time, he said that there is also a sense of collective self-sufficiency common to both areas which arises from living in difficult terrain.

“The next three months will be crucial,” Paudel said. The coming monsoon season and the heavy rains it will inflict on the cracked, disturbed land could create dangerous landslides that would hamper relief efforts.

Paudel plans to continue doing whatever he can to help the area recover. “It is what I feel I must do,” he said.