Project Condom: Past, Present and Future 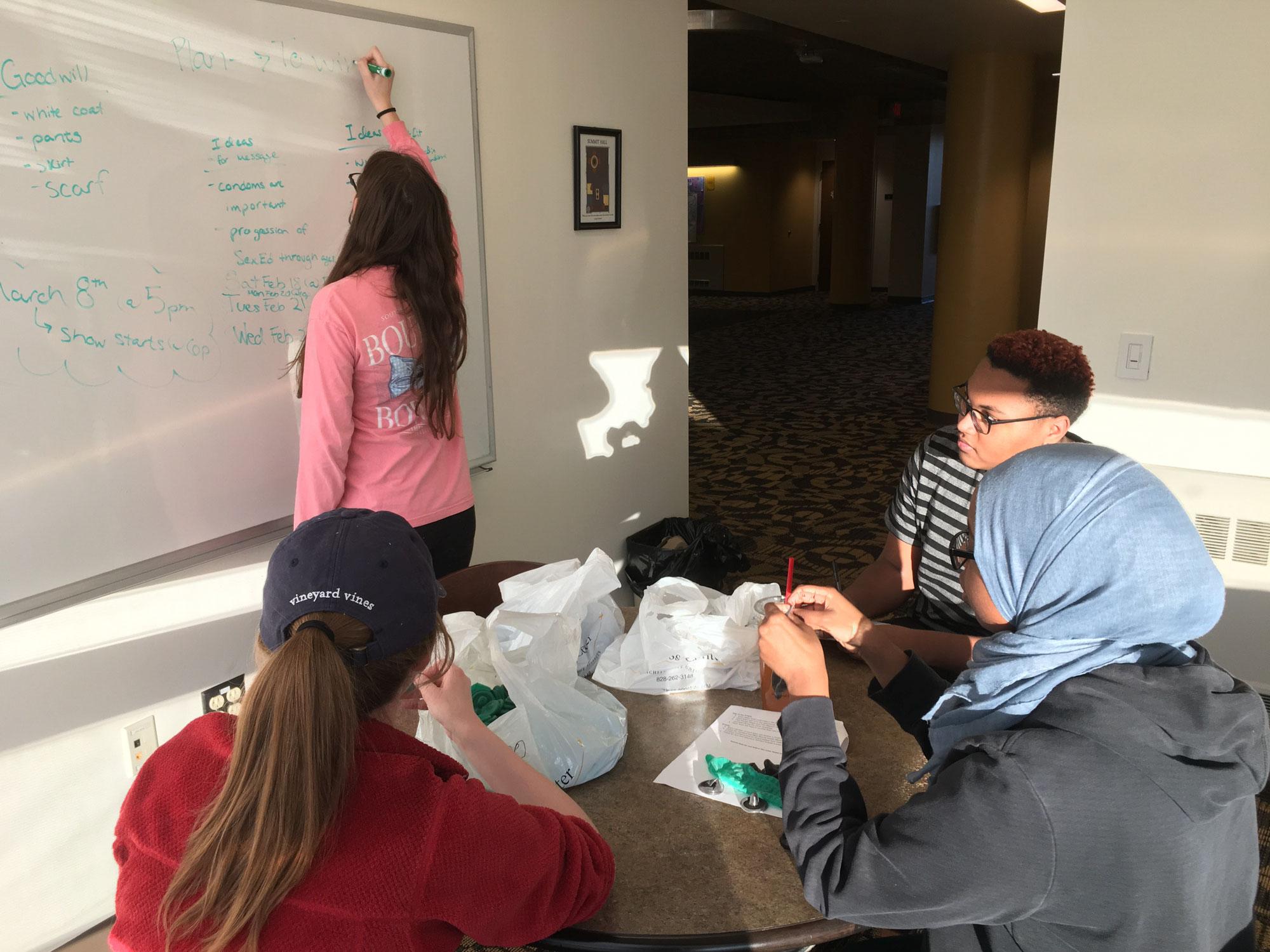 Team Future Gynies plans for the Condom Fashion show which is to be held in the Plemmons Student Union on March 8th. The team captain is Sophomore Elizabeth Watson.

The word condom might not be casually thrown around in everyday conversation. However, on March 8 in the Parkway Ballroom, it might be a word students won’t seem to hear enough of. That is because Student Wellness Center will hold its first Condom Fashion show there at 7 p.m.

The Condom Fashion Show is a competition in which seven teams compete head-to-head with outfits made out of unwrapped, colored condoms. Each team was given 1,000 condoms to use in their creations.

The event will involve the actual fashion show with the

garments being made as well as music, an intermission centered around sexual health awareness and information about resources on and off campus that provide information and help for students who have sexual health concerns or are merely interested in learning more.

Saray Smalls, coordinator of Student Wellness at Appalachian State, has been the main brains behind this operation. Previous to working at App State, Smalls went to graduate school at the University of South Carolina and worked as a graduate assistant in the sexual health office. Her main job while there was event planning and thus was responsible for hosting Project Condom.

“It was there that I was first introduced to the concept and I remember thinking this was really cool,” Smalls said. “The students there had some of the most creative designs I had ever seen, out of condoms no less.”

Smalls then became the coordinator of student wellness at Appalachian State and felt that this would be an interesting thing to bring with her.

The event is more than just for entertainment. Part of the competition is that each team must have an outfit that embodies a sexual health message.

“So, although Project Condom is fun, it’s [not just], ‘oh my gosh an outfit made from condoms,’” Smalls said. “We wanted to make sure we’re sending a clear positive message pertaining to sexual health.”

These messages can be about virtually anything pertaining to sexual health from interpersonal violence prevention, to sexual pleasure or even to specific populations like individuals of color or the LGBT community.

The goal of this is to “leave [the audience] with information that they did not have prior to attending the event,” Smalls said.

Each team has different ideas on how they do this.

Elizabeth Watson, a sophomore athletic training major, is the captain of her team, the Future Gynies. Her team is one of three teams that were made from the Phi Chi medical fraternity.

“As a premedical society, that’s why we were driven to this project,” Watson said. “We are drawing inspiration from that and actually using a pair of scrubs and attaching condoms to that.”

Although there are several sexual health messages being displayed throughout the various teams, there is one overlying theme to the whole event that students must add in.

This year’s theme is Project Condom: Past, Present and Future. Each team must look at where their message started and was previously, where the world is at with the particular issue now and where the future of the particular message is.

“My initial thought process was that the outfit would represent where we’ve been concerning sexual health. Then I think about where we are now: normalizing sex and pleasure,” Smalls said. “I think now we are working to be more inclusive and recognizing that sex is not a heterosexual act and being more educational in that affect. I’m also thinking where else can we go with this in the future.”

Teams are also assigned a Wellness educator from We Can that help them to “further their connection to the theme and further solidify their sexual health message concerning the requirements,” Smalls said.

Watson felt that her wellness coordinator was extremely helpful.

“[Our wellness coordinator] is really passionate about public health and women’s health, so she’s a great asset to the team,” Watson said.

Ashley Wainright, a sophomore psychology major, is a wellness coordinator for the event. She works with We Can as a wellness educator, and when she heard about Project Condom she thought it was a great idea.

Wainright originally joined We Can to focus on the mental health aspect of wellness education.

“I was the type of person that wasn’t super comfortable with speaking about sexual health, so I did a lot of stuff with mental health instead,” Wainright said.

However, as she got more involved with the wellness education group, she became more comfortable with the idea and is now helping with Project Condom.

“It’s normal to use a protective barrier, it’s normal to engage in pleasurable sex, it’s normal to utilize a dental dam. It’s normal to request condoms from the condom fairy,” Smalls said. “So normalizing the idea that if you’re going to have sex that’s okay we’re not here to shame, but we want you to be as healthy as you can be when having sex.”

The timing of the event is also not a coincidence.

“It is before spring break so also giving out some great messaging before students travel or have this time off,” Smalls said. “We just definitely want to add that additional awareness and normalize that barriers are great.”

As for the future of Project Condom, it seems that it will be a continued annual event.

“I definitely see us doing this every single year in the future until students say they don’t want to do it anymore,” Smalls said.

The event may look slightly different in the future as it continues to find other ways to promote sexual health.

“In the future I would love to see the utilization of internal female condoms for the garments as well as dental dams used for the garments,” Smalls said. “That adds to that added awareness and information that there are so many barrier methods available to students.”