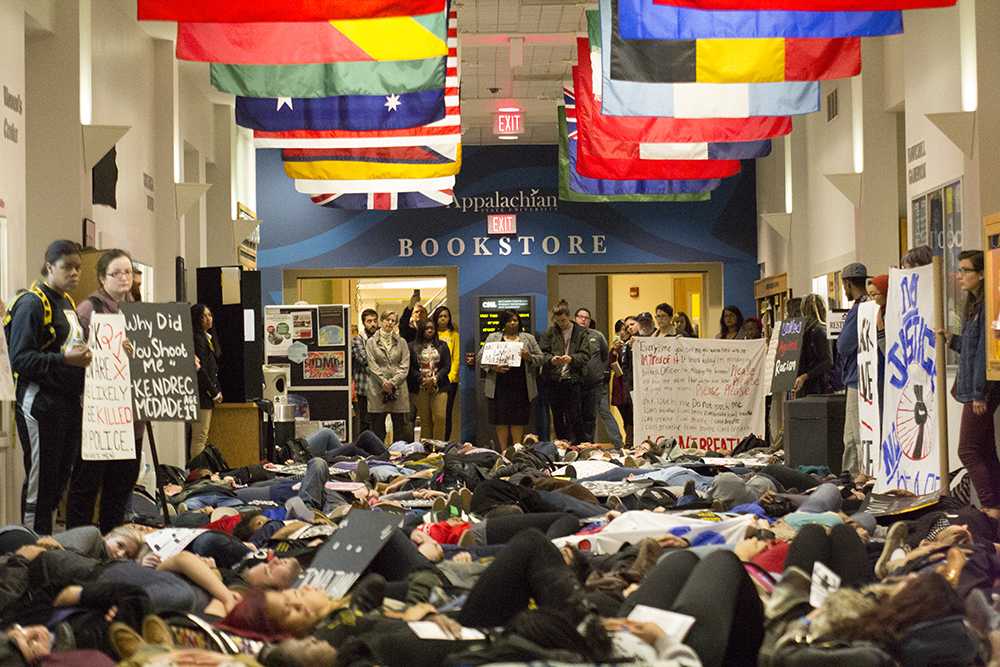 Protesters gathered at several locations on Appalachian State University’s campus on Dec. 5 for a series of solidarity protests against police brutality and recent race relations across the country.

The protesters’ goal was to address “overaggressive, apparently unimpeachable, militarized, and white supremacist policing culture,” according to the event’s Facebook page – “ASU in Solidarity.

The protests began outside of Belk Library at noon and moved to Plemmons Student Union and Sanford Mall before ending inside Roess Dining Hall.

At each location, protesters demonstrated a “die-in,” where they laid on the ground for four and a half minutes in silence. In transition from each location, the protesters engaged in call-and-response chants. Brochures were handed out that gave an overview of the events that occurred in Ferguson, Missouri.

Junior art education major Mary Lyons, who organized the event with the use of social media, said the “die-in” was a reference to the events of Michael Brown’s death in Ferguson, Missouri.

“The four and a half minutes of laying on the ground symbolize the four and a half hours that Michael Brown laid in the street without aid or dignity,” Lyons said. “There is a long and growing list of people of color slain by the police and it’s unacceptable. That’s why we’re here today – to speak out against racism and other campus and nationwide issues.”

Lyons said she began organizing the event this past Monday.

“It was put together fairly hastily,” she said. “I’m involved with several different organizations on campus, and I decided to reach out to all of them to spread interest and awareness and to ask for support.”

Lyons said the anger and seething emotions she felt following the results of the recent events in Ferguson, Missouri and around the country prompted her actions.

“I have never been so hurt or angered in my life,” she said. “It’s a painful situation for me as a woman of color, and for many other students as well. I felt like there was need for immediate action on campus, because institutional racism can’t be ignored anymore.”

Junior psychology major Kylil Martin attended the series of protests and said he also feels anger and disappointment and that he could not pass up the opportunity to express himself.

“It’s not right for people of color – and minorities in general – to have to shelter themselves because the majority doesn’t care about their lives,” Martin said. “As an individual who grew up in poverty, I’ve seen bad, but police brutality will always be unacceptable. I’m upset because they’re taking innocent lives, and it feels like no one cares.”

Martin said he has personally struggled with racism on campus.

“It’s hard to believe that some people think that racism is not an issue in Boone,” he said. “There’s active racism everywhere, even in classes, from teachers. There are always going to be differences. But no one should blatantly point out those differences, and then oppress that difference.”

Senior sociology major Carolyn Crenshaw, who made the brochures handed out at the protests, said the issue of racism and police brutality is not being taken seriously nationally or on campus.

“I think that police brutality against any individual for any reason is unacceptable,” Crenshaw said. “Especially when it’s against one demographic for no other reason than racial bias, racial stigma and racial stereotypes.”

Lyons and other protest organizers plan to reconvene on Monday.

“We are planning to protest and hold die-ins again on Monday,” Lyons said. “We are looking at exam schedules and discussing different locations right now.”